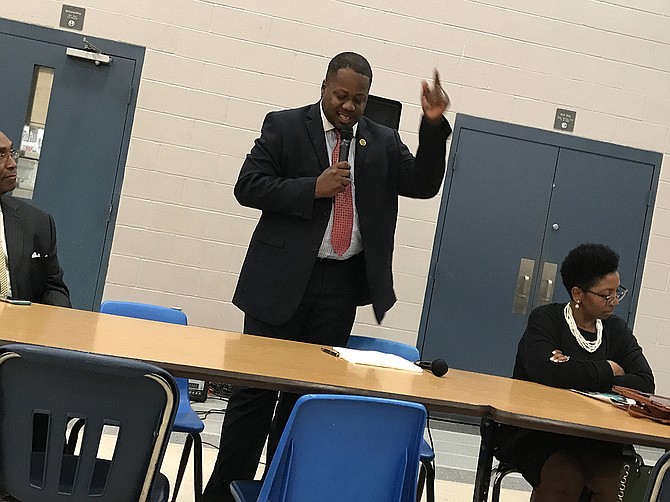 Ward 6 Councilman Aaron Banks hosted a townhall meeting about crime Thursday night at Forest Hill High School. In addition to the usual line-up of police officers at the front table, Banks focused on the need for residents, especially men, to praise and guide young people on their block. Photo by Donna Ladd.

JACKSON — On a rainy Thursday night at Forest Hill High School in south Jackson, Ward 6 Councilman Aaron Banks hosted what he says is the first of many more of his "Not on My Block" crime-prevention forums, in light of high-profile crime and violence recently throughout the Jackson area.

Banks called for "a man from every block" to implement his five crime-prevention steps in their neighborhoods. The steps ranged from the predictable advice to work closer with police commanders and beat cops to the less-common call to build relationships with teenagers on their streets, including loudly celebrating their accomplishments. 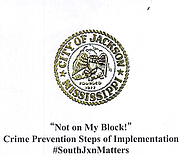 "We have to be willing to stand up, and we have to be willing to engage the young people. Every young person we see isn't going for bad," Banks told the small crowd gathered last night in the Forest Hill cafeteria, including former Ward 6 Councilman Tyrone Hendrix. "And they might be in bad situations, but we can change that if we just take the opportunity and the time to talk with them."

In hopes of motivating the crowd to follow his advice, Banks shared a story about how his father, Barron Banks, would approach young men about issues he noticed, such as sagging pants. The councilman added that Jacksonians should begin highlighting the achievements of their community members, especially teenagers, to motivate them to continue their good deeds.

"Sometimes we are so quick to say what someone is doing bad, and we never applaud them for the good that they do," Banks said. "We have to begin to applaud the good efforts."

Officers from the Jackson Police Department, Forest Hill High School Principal Victor Ellis, and Willie Jones, president of Dependable Source Corp. of Mississippi, also joined Banks to discuss various steps toward lowering crime in the south Jackson area. Those steps included the need for job training and opportunities and reentry options for those returning from prison.

At one point, Mayor Chokwe A. Lumumba joined the crowd and spoke briefly, first commending the police, but quickly moving beyond the idea that they are responsible for stopping crime that results from many causes, from poverty to dropping out of school.

The mayor did not offer specifics at the forum for attacking those conditions, but pushed the idea that expecting the police to stop violence is too late in the process.

"If you do nothing to attack the conditions that lead to crime, you can't out-police it," Lumumba said. "Because if you arrest somebody at 5 o'clock, if you've done nothing to address the conditions which led to it, you'll have somebody there at 6 p.m. right behind him, right? So that's what we need to do is talk about how the community can come together, how we can take on roles and take substantial steps in assisting in our aims. So your presence is key to that particular process."

Banks closed the forum by getting attendees to read his five steps out loud together and pushing them to share them with family, friends and neighbors.

"This is simple. But it's not effective if we don't leave from here and share it," Banks said. "I'm not going to stop with this until we get a man from every block."

Banks mentioned that Jacksonians interested in starting a Neighborhood Watch Association can contact Keyshia Sanders, constituent services manager for the City of Jackson. Jacksonians can contact Chief Joseph Wade about the Police Athletic League Program and call 601-960-1950 to ask about the Citizen's Police Academy and Youth Citizen Police Academy.