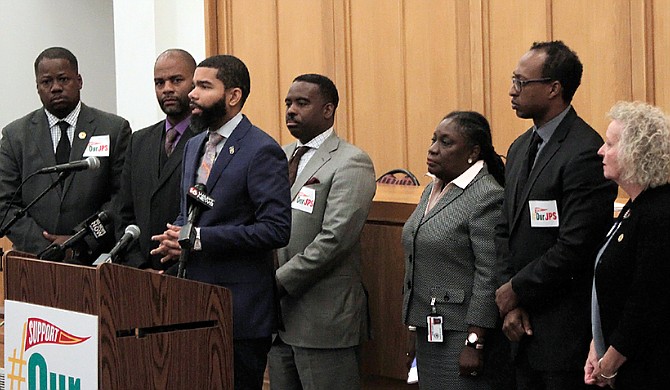 Mayor Chokwe Antar Lumumba said his administration is ready to fight for Jackson Public Schools to the furthest extent, if the State of Mississippi tries to take over the district. Photo by Arielle Dreher.

JACKSON — Mayor Chokwe Antar Lumumba rallied with advocates on Tuesday ahead of this morning's Mississippi Commission on School Accreditation meeting, during which members will determine whether or not to put Jackson Public Schools is in an "emergency" situation.

"While we recognize there is opportunity for improvement within our Jackson Public Schools, we maintain our position that transferring into state control historically does not provide for improvement within the school district, nor has the state demonstrated a capacity to handle our school system," Lumumba told a crowd gathered at the Mississippi Department of Education auditorium. "Furthermore, we recognize that there are several outliers and blatant inconsistencies in the audit."

On Aug. 31, MDE released a 680-page investigative audit of JPS, alerting district administrators that the commission would decide Sept. 13 whether or not an extreme emergency exists in the district. In those two weeks, the JPS Board of Trustees met twice to discuss their strategies, once with consultants and once with just district officials. JPS officials gave no public statements except to say that they had received the report and were reviewing it.

On Sept. 12, education advocates, Jackson city council members and concerned citizens and business owners rallied to stop the presumed "takeover" of JPS. They sent a petition with over 2,000 signatures to State Superintendent Carey Wright, the commission and the Mississippi Board of Education.

Lumumba said he met with Dr. Wright about JPS and explained the efforts his administration and the City are willing to take to move the school system forward. The mayor pointed out that JPS was going through an investigative audit while carrying out a corrective action plan.

"The first (thing) we should recognize is that it is unprecedented that a Corrective Action Plan was agreed upon at the same time the audit has taken place," he said.

The mayor alleged "nefarious intent" on behalf of MDE and the attempt to "take over" the school district.

"I had been assured that this was to be an objective process in which the facts were going to simply be presented," he said. "After discovering efforts that have been made in order to take control of our school system, specifically by that leadership, I impose nefarious intent."

Patrice Guilfoyle, communications director at MDE, said Wright would reserve comment until after the State Board meeting, which is Wednesday morning.

Local pastor Ronnie Crudup Jr. echoed her sentiments, saying sports kept him in Jackson Public Schools. He urged the State to allocate more money to JPS instead of taking over.