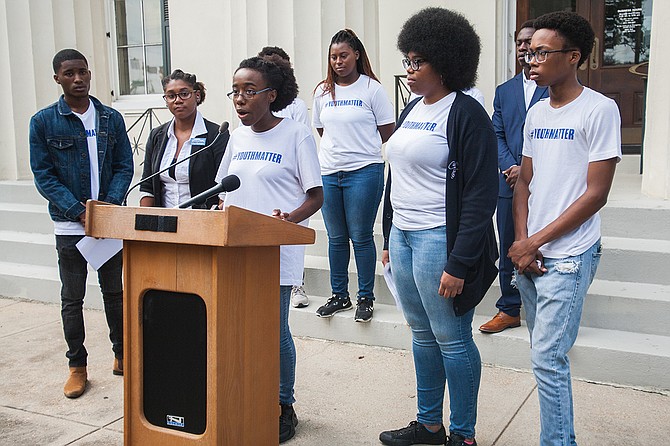 JACKSON — A State of Mississippi takeover of Jackson Public Schools could be devastating to young people, a group of JPS students told reporters outside City Hall Monday. State control of JPS could take away half of their extracurricular activities and affect school attendance and graduation rates, the students said while calling for adults to collaborate better on their behalf.

"I feel that with this whole takeover, some kids feel that it's hard enough as it is, and so this takeover (would be) stripping so much from them (and) would just drive them to actually just give it up," Dante Moore, the Callaway High School student representative to the JPS Board of Trustees, said. "I don't feel as a district we would want that. ... I feel this takeover, ultimately, it will clear out the schoolhouses and fill up the jailhouses," Moore said.

Student Ambassadors, who represent all seven JPS high schools, called for greater collaboration among all stakeholders in their education as well as for all authorities in the city and state to listen to student voices.

"We believe the solution is to maintain local leadership with greater collaboration between JPS, MDE, local leaders, our communities, parents and students to address the problems in our schools," Moore said. "... We know first-hand the challenges we face detailed in the audit, and we also know the progress JPS has made, but we need more time, collaboration and implementation."

The JPS Board of Trustees just approved a policy to allow student representation on the board this year, and students at each high school elected representatives to advocate on their behalf to the board.

Joseph Jiles, a junior at Lanier High School, said a takeover might mean the loss of student representation to the board. "This policy gives us a seat at the table for decisions that directly affect our lives. Will the takeover provide that same opportunity for students to be empowered and to receive technical experience in civic engagement?" he said on Monday.

"How will the voice of youth and the community be heard to hold MDE accountable? And if MDE is not successful in improving our schools, who do we appeal to?"

Zion Blount, a senior at Murrah High School, agreed. "Maybe that (work) was all for naught, because with the (potential) dissolve-ment of the school board, it's like OK, we're going to have to re-build, re-plan or re-strategize how to get our voice out there again if it does happen," she told the Jackson Free Press.

Blount said she had read the investigative audit of JPS that the Mississippi Department of Education published in August. While some findings in the audit seem true to her experience, she said, other findings do not.

"It's been harder on students, I will say, and I feel like as far as the takeover is concerned, they are trying to be more preventative," Jiles said Monday. "And we're advocating to prevent the takeover; however, they are more bracing themselves for the potential change, I feel like."

Blount echoed that feeling, saying that in terms of discipline and suspensions, she felt like administrators were doing "a zero tolerance thing."

"It's a response, but it's not the right answer," Blount said. "But with more student representation, that's something where we can really have a direct line to school-board members."

The governor must make the final decision on whether or not to declare a state of emergency in JPS. He will likely decide next week when MDE publishes the accountability grades of districts and schools.