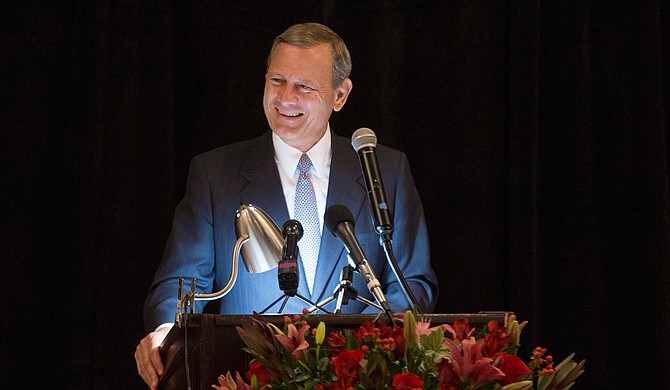 JACKSON — More than 100 years ago, in the shadow of the Civil War, black schoolteacher Samuel Alfred Beadle studied for the Mississippi bar exam to become a lawyer with the help of Anselm McLaurin, a Confederate veteran who became governor and a U.S. senator.

The first time Beadle tried to take the test in Rankin County, however, the chancellor overseeing the test said he could not take it due to his race.

McLaurin was determined, however, and brought another white lawyer, Patrick Henry, who had taught Beadle, with him to the courthouse. That time, the chancellor permitted Beadle to sit for the exam, enduring the follow-up questioning from 26 Jackson lawyers.

"Through the ingenuity, the determination and the spunk and gut of these lawyers, they had their day in court. Beadle stood his examination and passed it in outstanding form," Mississippi Supreme Court Chief Justice William Waller told a roomful of lawyers and judges at the Jackson Hilton in September.

After Beadle passed his exam and withstood the questioning, the story goes, his supporters lifted him on their shoulders and paraded him around the courthouse.

"What a beautiful picture of people coming together and working together at a time literally in the shadow of the Civil War," Waller said.

Mississippi's modestly integrated law sector would not last long, however.

Beadle was not the first black man to join the Mississippi Bar. A.W. Shadd in 1873 "appears to be the first African-American attorney to be admitted to the bar," Melanie Henry writes in the "The Mississippi Bar's Centennial." More black men joined the bar for a short time, Waller said, until the turn of the century when James K. Vardaman became governor in 1904.

Vardaman, an ardent white supremacist, once declared, "if it is necessary every Negro in the state will be lynched; it will be done to maintain white supremacy." He would all but cause the black members of the bar to disappear, Waller said.

Henry writes in her book that by the 1920s, Mississippi had 11 black lawyers. It took decades for African Americans to gain representation in the courthouse or the bar again, as the Jim Crow South pressed down on the state's African Americans who had supposedly gained their freedom at the conclusion of the Civil War.

The Civil Rights Movement birthed a new generation of black advocates and attorneys. R. Jess Brown, Jack Young and Carsie Hall were the prominent African American lawyers in the state at the time, Henry writes. Black women had even less representation in the courtroom, and the first black female attorneys joined the Mississippi Bar during the Civil Rights Movement. Civil rights activist Marian Wright Edelman was the first African American woman admitted to the Bar in the state.

It was not until 1964 that attorneys tried to seriously prosecute crimes against African Americans—like lynching, Waller said. Even when they were unsuccessful, the prosecutions still laid the groundwork for future convictions. He pointed to the first trial of Byron De La Beckwith, who killed Medgar Evers in 1963, as the turning point. His father, Bill Waller Sr., prosecuted Beckwith for Evers' murder then even though he received two mistrials. That opened the door for his retrial and conviction 30 years later in 1994. A decade before Beckwith's first trial, an all-white jury had acquitted two white men for kidnapping and lynching Emmett Till in the Mississippi Delta.

Chief Justice Roberts introduced Waller on Sept. 27 at the bicentennial celebration at the Hilton, noting that the state judicial system is one year older than the federal courts established in the state.

"This year is only the 199th anniversary of federal courts in Mississippi," Roberts said in Jackson. "Congress admitted Mississippi to the Union in 1817, but it wasn't until next April that Congress (created) federal courts."

"I am always conscious that since the earliest days of this country, the overwhelming portion of the legal and judicial business of our citizens has been handled in the courts of our states, and therefore, it is indeed a privilege to help celebrate the 200th year of such work here in Mississippi," Roberts said.

Throughout his keynote address, Waller emphasized that the state had moved beyond the dark days when only white people received justice in the judicial system.

Waller emphasized the importance of his court re-writing and adopting the new Criminal Rules of the Court, an effort now-retired Justice Ann Lamar now spearheads. The Mississippi Supreme Court published the new rules in December 2016, and the new rules took effect in July 2017. The rules should iron out deficiencies in the statewide judicial system, creating a uniform standard for everything from sentencing to bail-bond amounts.

One part of the rules, for example, say that if an accused person does not appear before a judge within 48 hours, he or she is entitled to a minimum bail bond.

Waller mentioned Judge Keith Starrett instituting drug courts statewide in 1999. Starrett worked on criminal-justice reform legislation that the 2017 Legislature ended up tossing at the last minute, opting for minute changes, instead of the broader ones that would have helped inmates coming out of the system access identification cards and jobs. Waller told the story of one young mother who had lost custody of her children due to her crystal-meth habit.

"At the time this picture was taken, she was still in drug court," Waller said, gesturing to the slide with the mother's image on it. "It's a long-term program, but she already has custody of her children back."

The federal investigation of the Scruggs scandal also brought a variety of collateral damage—including former Hinds County District Attorney Ed Peters getting immunity to testify against Hinds County Circuit Judge Bobby DeLaughter after Peters offered him a million-dollar bribe to throw a Scruggs-related case. Peters, then with DeLaughter as his assistant district attorney, gained national fame for successfully prosecuting Beckwith for Evers' murder in 1994. Around the same time, Peters and DeLaughter also handled the rape and murder case against Cedric Willis; he served 12 years before being exonerated.

No black women have served as a justice on the Mississippi Supreme Court to date. The first black woman sworn onto the Mississippi Court of Appeals was Judge Ermea Russell in 2011. Ceola James filled Russell's seat, and now Judge Latrice Westbrooks occupies that seat.