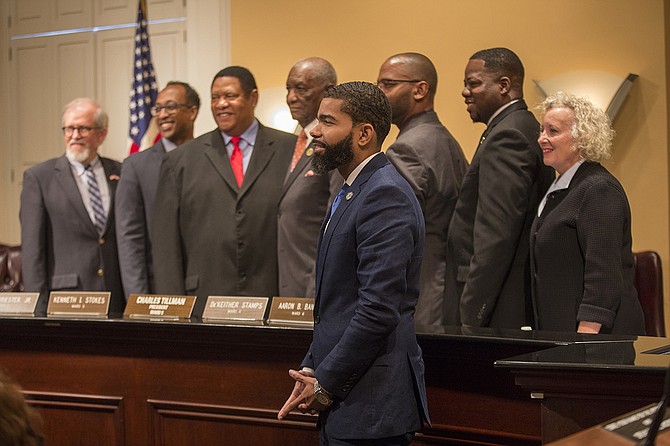 Before Thanksgiving, the Jackson City Council approved a skating rink to go up for two weeks in Smith-Wills Stadium later in December. Photo by Imani Khayyam.

JACKSON — It was mostly business as usual at the last Jackson City Council meeting on Tuesday, Nov. 21, just before the Thanksgiving holiday. The council finalized plans for the synthetic ice-skating rink coming to Smith-Wills Stadium from Dec. 22 through Jan 4. The rink will offer skating sessions during the week and four daily sessions on the weekend. Ideally, people should reserve spots prior to and prices will range from $7 per kid and $10 for adults.

"There's no need for anybody in Jackson to go to Flowood to go ice skating," Ward 6 Councilman Aaron Banks said.

The Department of Public Works asked for a budget revision to re-allocate funds in the amount of $315,191 for "unanticipated needs" to make up for "vacated positions" and to continue preventative sewer cleaning in compliance with the federal consent decree until "maintenance staff can be filled and trained and equipment can be repaired."

The late-night meeting also revealed what the council is thinking about communications with the mayor's office, confirmation hearings and even corporal punishment.

On Nov. 8 the city council approved four members Lumumba had nominated for the new school board. Then, at last week's council meeting, members had to allot time, grudgingly, to confirm two newly nominated members so the next school board meeting on Nov. 28 would have a quorum. Confirmation hearings normally happen separately. The mayor missed the Nov. 28 meeting.

Banks and Ward 4 Councilman De'Keither Stamps were particularly irritated by the last-minute nominations. Stamps began his first round of questioning the nominees by mentioning that he did not even know they would be confirming school board members during the meeting. Reading through Andrea Jones-Davis' resume during questioning was the only thing that convinced him to vote to confirm her. Banks said he was "uncomfortable" because Jones-Davis lives in his ward, and he had not had time to properly get to know her because he says the City informed him too late.

Stamps pointed out that council members had to be briefer this time because they had an entire meeting agenda to attend to, while the last school board confirmation took place over nearly five hours. The City's memo to the council is dated Nov. 15, although the confirmation just showed up on the council agenda the previous Friday.

In the mayor's absence, Chief of Staff Safiya Omari defended the administration, citing "the time factor" as the reason for such short notice and stuffing the confirmation hearing into the council meeting.

Jones-Davis was confirmed after more than an hour of discussion. Robert Luckett, who teaches at JSU and runs the Margaret Walker Alexander Center there, was also confirmed, but his hearing lasted only about 30 minutes.

Council members ended up discussing their own views on corporal punishment in schools while questioning the new board members—a matter that splits the council. Ward 5 Councilman Charles Tillman, Ward 3 Councilman Stokes and Stamps support it, while Ward 7 Councilwoman Lindsay and Ward 2 Councilman Melvin Priester Jr. are against it. Banks did not comment, and Ward 1 Councilman Ashby Foote was absent.

The council voted Nov. 21 to move along the process of securing special local improvement districts in Jackson. By state law, municipalities cannot do this on their own, but this vote gives legislators in the 2018 legislative session the green light to advocate for Jackson to create improvement districts.

Improvement districts manage and finance basic services for public improvements, which in Jackson would mean development opportunities and rehabilitating blighted areas, a memorandum in the Nov. 21 Council agenda packet reads. Jackson currently has more than 4,000 dilapidated, blighted properties that are proven links to crime and dumping that, in turn, cause the city to lose businesses its tax base, the memo details.

Email city reporter Ko Bragg at [email protected] and comment on this story at jfp.ms/city.