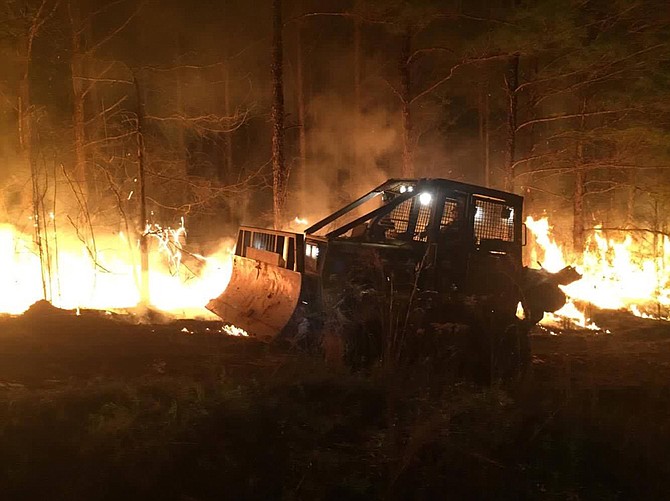 Fifty foresters with "boots on the ground" to fight wildfires all over Mississippi on almost 19.8 million acres will lose their jobs come July 1. The layoffs come after the state Legislature cut the Mississippi Forestry Commission budget by almost 16 percent in the past session.

Assistant State Forester Russell Bozeman told the Jackson Free Press that the commission was forced to reorganize its operations after the cut, which will also mean the elimination of about 25 administrative jobs—bringing the total cut to 75 jobs.

Bozeman said the cut means the commission will have fewer people covering larger territories. Previously, the commission had almost 50 public offices—now they will have 25. Offices open to the public and work centers in each county will not close as a result of the cut, however; they will just have fewer or no workers going forward.

"Our hope is that we shouldn't see a drastic change (in the delivery of services)," Bozeman said.

The Mississippi Forestry Commission controls the state's wildfires on almost 19.8 million acres of both state-owned and private land. Foresters track the health of state forests, maintain 16th Section lands, which are public-school trust lands, and help prevent, contain and put out forest fires.

The budget cut meant a loss of $2.67 million for the state agency.

"The state money we get only goes toward salaries," Bozeman said. "It's been beat into our heads where we can't spend one-time funds on recurring expenses."

The commission funds its equipment and gear for other volunteer fire departments around the state with pass-through federal funds and by applying for other grants, which is why the cut had to go directly to salaries, Bozeman said.

Using historical wildfire data and looking at the geography of the state, the commission mapped out the new districts. Previously, a single district covered maybe one to three counties at most. Now, some districts contain two to five counties. For example, Hinds County is in a district with Warren County alone, while one of the districts contains DeSoto, Tunica, Tate, Marshall and Benton Counties.

Republican leaders in the Legislature repeatedly mentioned their campaign promise of cutting state government during the session to back up their budget cuts. House Speaker Philip Gunn, R-Clinton, told the Stennis Capitol Press Forum last week that Republicans reducing the size of state government should not come as a shock to anyone.

"Revenues have come in less than projected, which has forced us to make cuts; it has also forced us to budget based upon what we think is going to come in, in the future," Gunn said last week.

Gunn said reducing government is what Republicans campaign on, so it shouldn't be a "surprise or a shock or catch everyone off-guard."

The Forestry Commission is not the only state agency that is making deep cuts to its agency. The Department of Mental Health has yet to announce a reorganization but has estimated that it will have to lay off at least 600 employees.

Bozeman said he thinks the Forestry Commission will be able to provide the same response times with the new districts, despite losing 75 employees—but only time will tell. The forest-fire seasons are in spring and fall in Mississippi.

This past March, he said, was pretty bad. Gov. Phil Bryant issued a burn-ban last fall, after one man died to an agriculture fire burning out of control, quickly becoming a forest fire . Summertime is a relatively low fire danger time, but wildfire season largely depends on weather and drought conditions.

The commission coordinates with local, municipal and voluntary fire departments around the state to respond to wildfires, but Bozeman explained that putting out a wildfire is much different than extinguishing something like a house fire by dousing water on it.

State foresters fight wildfires by bulldozing a path around the blaze, and using a fire plow to light a pathway of brush to create a fire lane in the wildfire's path. That way when the fire gets to the fire lane, it goes out with no extra brush or fuel to eat up.

The gear and equipment to fight wildfires will still be accessible at work centers in every county, even after the reorganization. It is just the manpower that will be lacking.

"We're sad we have to do a reduction at all—we're always concerned when we have to cut personnel," Bozeman said.