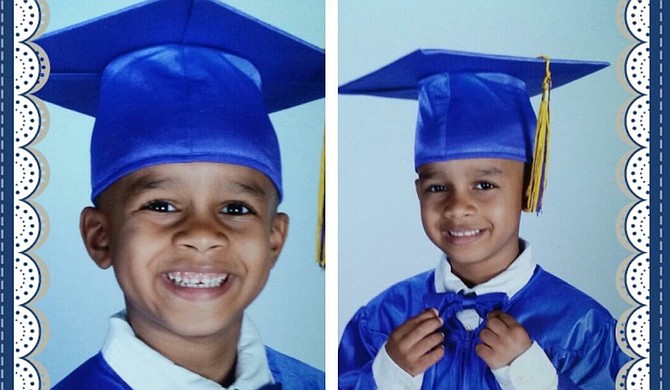 Little Kingston Frazier died the day he was supposed to graduate from kindergarten. But his death brought an entire community together, at least for a week. Photo courtesy Kingston Frazier Family

JACKSON — The 6-year-old boy was to be crowned in front of family and friends on May 18 as he graduated from kindergarten at Northwest Elementary School in Jackson. However, three teenagers allegedly kidnapped and murdered the boy early that morning, delaying his celebration. Then, a week later, hundreds of loved ones and unfamiliar faces had to wait to gaze upon the pearly-white throne that holds Kingston Frazier, the newly crowned little king, along with a Ninja Turtle and blue Power Ranger next to him.

People of various backgrounds, races and age stood under the warm Mississippi sun to view the face of a child they barely knew. Cars, trucks, and chopper motorcycles crowded the streets and yards surrounding the Morning Star Baptist Church, only to say goodbye to a life cut short.

Although it seemed to be a sorrowful day, hope penetrated the eyes and hearts of those who attended the celebration of little Kingston Frazier.

'Love Hell Out of People'

"Everybody said this is a rallying cause, and Kingston's death is bringing folks together, but folks still shooting each other," Mayor Tony Yarber said at the service as Kingston's mother, Ebony Archie, sat in the front row. He added that you have to "learn how to literally love hell out of people."

Sheriff Tucker stood at the podium with a red face and watery eyes as he spoke to the audience saying that the residents of Mississippi has to do better, referring to the little boy as "an angel for all of us."

The Democratic nominee for Jackson mayor, Chokwe Antar Lumumba, shared that as a father he was deeply affected. He said his 3-year-old daughter and wife, Ebony, were at the same Kroger earlier the day Kingston was kidnapped.

Kimberly Smith, principal at North Jackson Elementary School, presented a resolution in memory of Kingston, whom she described as a "thriving kindergartner who loved math, play time, and demanding attention." The principal said that Kingston will always be remembered for his role in a Jackson 5 skit. Kingston's teachers accompanied Smith.

One of the teachers shared her memories of teaching Frazier. "He would finish all of his work just so he can talk and play with his friends," she said. She cried, describing how she comforted Kingston when he cried. "I would say, 'Come here, Kingston,' and I would rub his face, and I would tell him, 'You know we don't cry in this room; clean your face and stop that.'"

Many of Kingston's cousins, of all ages, shared poems and memorable moments they had with him before he was killed. Applause and words of encouragement replaced silence as Kingston's uncle, Martin Archie, struggled to talk about his nephew with whom he shared a special bond. Archie took many deep breaths, saying Kingston never had a sad moment; he was always happy.

"All I can remember is him calling me the day before his graduation saying, 'Are you coming to my graduation? Bring me some balloons.' His favorite words was, ya know, he get ready for school and say, 'Hey, how I look today? Am I fresh?'" The audience broke into laughter.

"I used to say, "Yeah, Kingston, you look good. Be good in school."

Kingston's parents and grandparents did not get up to speak but instead left tributes in his obituary. His family wore the color green, which was one of the boy's favorite colors, and buttons that had Kingston's handprint from school.

It was a celebration fit for a king.