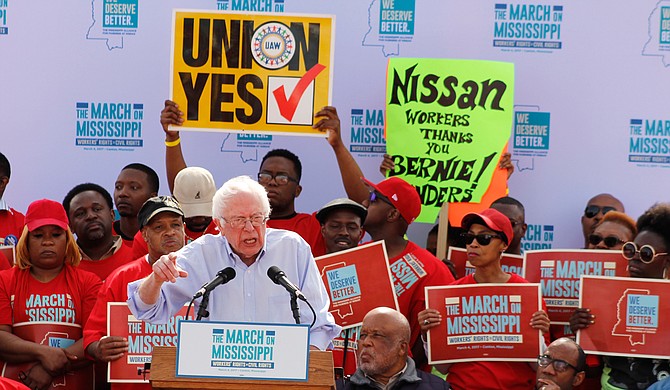 In March, when Bernie Sanders stood on the podium at the "March on Mississippi" in Canton and told the crowd that "the eyes of the country and the eyes of the world are on you," thousands cheered. Photo by Arielle Dreher.

OXFORD— In March, when Bernie Sanders stood on the podium at the "March on Mississippi" in Canton and told the crowd that "the eyes of the country and the eyes of the world are on you," thousands cheered.

The Vermont senator and unsuccessful presidential contender was the big draw of that event, and his presence indeed put a national spotlight on the longstanding struggle of Nissan workers in Canton to have an intimidation-free union election.

"One worker has zero power," Sanders said, "but when workers stand together, you have power. There is a reason why large multinational corporations have come to the South. They're told workers in the South will not stand up. It's a race to the bottom. Our job is to tell Corporate America they cannot have it all."

If the eyes of the nation and world were on Canton that day, were the eyes of the national Democratic Party? It's unlikely—a great irony when you consider how organized labor has been the party's most stalwart supporter since before Franklin Roosevelt. Under the leadership of the Democratic National Committee and its new chair, Tom Perez, today's party looks backward, not forward. Its eyes are still searching for excuses for its miserable failure in the 2016 presidential election.

Why? The Hillary Clinton wing still rules the DNC, and thus comes the endless groaning about alleged Russian interference in the election rather than the soul-searching it needs to move forward.

The party has poured more than $8 million into Jon Ossoff's congressional bid in a wealthy suburban district in Atlanta. Ossoff is the classic Clinton Democrat—a darling of celebrities who is fluent in French and studied at the London School of Economics and Georgetown University. He's hoping to win conservative support by talking about cutting $16 billion in "wasteful spending" from the federal budget.

In other words, he's not a Bernie Sanders kind of guy who can easily work a crowd of blue-collar assembly-line workers—whether it's Mississippi, Michigan, Ohio or Minnesota. Yet many of those are among the folks who used to vote solidly Democratic but turned to Donald Trump last November because at least he talked about issues that are important to them.

The DNC had a chance last month to support such a candidate in Kansas, James Thompson, a progressive populist in the Sanders style who was running for Congress. What did the DNC do? Practically nothing. Thompson had a real shot in the election but lost after getting only token support from the Democratic bigwigs.

DNC Chair Perez won his position after he defeated Keith Ellison, the candidate that Sanders supported. His two predecessors, Debbie Wasserman Schultz and Donna Brazile, both resigned amid allegations of using their positions to push for Clinton in the Democratic primaries.

Meanwhile, Sanders continues to rally young people and blue-collar workers around the country in an effort to offer future voters a real choice in the next election. He has launched an interview show broadcast on Facebook that allows for serious discussion of issues that matter to Americans. In other words, something other than tired conspiracy theories about last November's election.

One of Sanders' guests was Rev. William Barber, leader of North Carolina's "Moral Monday" movement and the state's NAACP president. Barber is one of the most dynamic social-justice activists in the country today, the kind of fiery supporter of civil rights and labor that used to be the heart of the Democratic Party.

The Barber broadcast got nearly a million viewers. Four-and-a-half million viewers watched another show that featured science educator and global warming critic Bill Nye. Most of the viewers ranged in age from 18 to 45.

Hillary Clinton thought she could win the 2016 presidential race on the same politics of her husband, politics that seem liberal on the surface—pro-choice, multicultural, racially sensitive—but are just as wedded to Wall Street, big banks, and race-to-the-bottom corporations as your garden-variety Republican.

Sanders offered a different vision, and the party under whose banner he campaigned did everything it could to undermine him. It's a vision that still inspires and gives hope to many, but don't expect the Democratic old guard to be among them.

Joe Atkins is a journalist and professor of journalism at the University of Mississippi. His blog is laborsouth.blogspot.com.