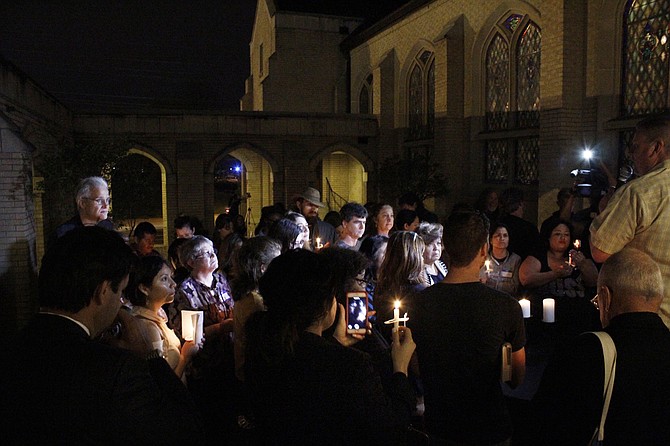 About 50 community members, pastors and advocates gathered at Fondren Presbyterian Church to hold a vigil and pray for Daniela Vargas' release from ICE's custody. Photo by Arielle Dreher.

JACKSON — As Daniela Vargas sits in an immigrant detention center in Jena, La., 166 miles from her Jackson home, concerned citizens, advocates and pastors gathered here in the courtyard of Fondren Presbyterian Church to hold a vigil for the 22-year-old undocumented immigrant. Immigration officials detained her last week after she spoke out at a press conference, two weeks after they took her father and brother from their west Jackson home.

Immigrations and Customs Enforcement officials announced last week that she would not be eligible for a hearing before an immigration judge. Vargas had applied for Deferred Action on Childhood Arrival status, referred to as DACA, at the time of her detainment. 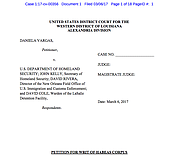 Her lawyers have filed two petitions to get her a hearing. Nathan Elmore with the Elmore and Peterson law firm visited Vargas in prison Friday, and he told those at the vigil that while she is not necessarily in good spirits, her "even-keeled" personality will serve her well in a situation where her rights are stripped away in prison.

Elmore said his team has filed two requests to the Department of Homeland Security. The first is for a stay of removal, which is asking ICE to release Vargas and give her case a year before they consider it again. The second is for prosecutorial discretion, asking ICE officials in Louisiana to at least give her a hearing before an immigration judge if they aren't going to release her.

"She's now in Louisiana and no longer under custody of officers in Mississippi—it's a different officer that would make the recommendation for prosecutorial discretion in her case," Elmore said Monday night. "In the best possible case, we're hoping they say this is a mistake (and let Daniela walk) ... but if that's not going to happen, then we want for her to have an opportunity to go before a judge and be heard."

This morning, the Southern Poverty Law Center and the National Immigration Law Center, along with other law firms, filed a habeas petition in a Louisiana U.S. District Court, asking the U.S. Secretary of Homeland Security John Kelly, as well as Louisiana ICE and detention officials, to release Vargas.

"DHS has produced no proof that Ms. Vargas did, in fact, waive her rights. Even assuming evidence of such a waiver exists, detaining and deporting Ms. Vargas without affording her a hearing would violate her Fifth Amendment due-process rights because, as a legal and factual matter, she did not—and, at age 7, could not—knowingly and voluntarily waive her right to seek a hearing to remain in the United States," the petition says.

Lawyers argue that Vargas' continued detention and inability to contest her detention violates her Fifth and First Amendment rights.

Elmore told the vigil last night that Vargas had a good argument for "prejudice" in court. "This young lady has spent 15 years building a ... record as a good solid citizen, and you want to send her somewhere where those achievements mean little to nothing. Now that is what you call prejudice," Elmore said Monday night, referring to her legal standing.

The petition filed this morning in U.S. District Court echoes these sentiments.

"In light of these pending applications for immigration relief (Vargas' DACA and U-visa applications), as well as any other relief to which she could be eligible, the violation of Ms. Vargas' Due Process rights results in substantial prejudice to her," the petition says.

The same law firms also filed an emergency motion to stay Vargas' removal from the country on the basis of their pending habeas petition. 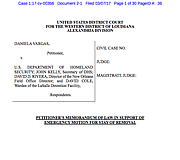 "Ms. Vargas filed a habeas petition on March 6, 2017, arguing that her continued detention violates her Fifth Amendment procedural and substantive due process rights to a hearing before an immigration judge, as well as her First Amendment right to be free from unconstitutional retaliation for protected speech," the emergency motion says. "Therefore, Ms. Vargas respectfully moves this Court to immediately grant an immediate stay of her removal during the pendency of her habeas petition for the reasons stated in the attached (memorandum)."

The memorandum that the law firms filed details Vargas' story and outlines why her attorneys believe she deserves a proper hearing with evidence.

Last night, vigil attendees wrote notes to Vargas that her attorneys will give to her in the LaSalle Detention Facility in Louisiana.

This story has been updated with law firms' emergency motions, which ask the court to stay Vargas' pending deportation while they consider their petition. Email state reporter Arielle Dreher at [email protected]; visit jfp.ms/immigration to read more of Vargas' story.