Abusers Get Another Divorce Pass from #MSLeg, But Senator Pushes Back | Jackson Free Press | Jackson, MS

Abusers Get Another Divorce Pass from #MSLeg, But Senator Pushes Back 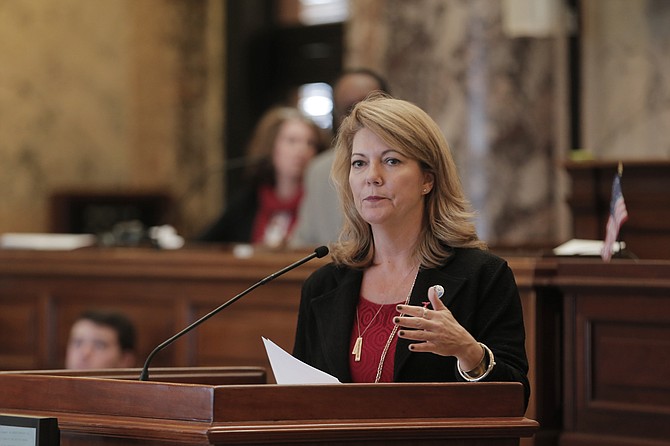 Sen. Sally Doty, R-Brookhaven, hasn't given up hope that domestic abuse as grounds for divorce could be added to a bill and passed this session. Photo by Imani Khayyam.

JACKSON — Sen. Sally Doty, R-Brookhaven, is not giving up on making domestic abuse grounds for divorce in Mississippi. Rep. Andy Gipson, R-Braxton, killed Doty's bill on Feb. 28, in committee, not even letting members vote on it.

The Senate had massaged out Doty's bill and worked on language to encompass and define exactly how domestic abuse could be grounds for divorce. Current state law says "habitual cruel and inhuman treatment" is a ground for divorce. That "habitual" standard can be a burden to prove, however, Doty said, and the Senate amended the bill to change this ground for divorce to say "Cruel and inhuman treatment, including spousal domestic abuse."

"It's a very high standard, and a lot of domestic abuse involves emotional terrorism—I've read so many different stories on Facebook and in the news, it's just heart-wrenching to see what some of these folks go through," Doty said. "I think domestic abuse is different and encompasses a lot of these emotional aspects."

The legislation passed the Senate unanimously. Then Gipson, who was the only no-vote on Doty's bill from last year in the House, killed this year's version because as he wrote in a Facebook post on March 1, "domestic abuse is already a ground for divorce."

Gipson says "habitual cruel and inhuman treatment" is already a standard that covers domestic abuse and violence as a ground to divorce one's spouse.

"As I said in the February 28th committee meeting, the law already provides a clear way out of a marriage for victims of domestic abuse, without the need for another bill. To deny this reality is to ignore the current state of Mississippi law," Gipson wrote in his Facebook post. "Divorce is a tragic event in the life of any couple. Sometimes it is necessary and/or unavoidable, and especially so in cases of domestic abuse. Victims of cruel and inhuman treatment should get out. But Mississippi doesn't need another bill to say what the law already says."

Doty said she has received an outpouring of support for the bill and gave three examples of Mississippians who have been trying to divorce their spouses for six years or longer, but due to difficulties in coming to agreements over legal grounds, the process drags on.

Since that Facebook post and amid negative publicity, Gipson seems to have shifted his hardline stance and wrote on Twitter about a "House plan for this issue."

Doty said she was disappointed and distraught that Gipson killed the bill, but said she is still open to working on adding language to another bill to get the measure passed this session.

"We've talked about possibly adding it as an amendment on another bill. We're looking at that. If there's a way to make it work this year even if we need to alter or amend or change language, I would certainly be glad to discuss that," Doty told the Jackson Free Press.

"I have not given up for this year, but certainly next year... I'm not going to go away with this issue," she said.

Rep. Gipson did not return messages left at his office by press time for this story.

Email state reporter Arielle Dreher at [email protected]. Read past coverage of domestic-abuse issues, including the refusal of the Legislature to make abuse a grounds for divorce, at jfp.ms/domesticabuse. See jfpchickball.com to get involved with this year's event on July 22, 2017, at Hal & Mal's to raise awareness of and money to fight interpersonal-violence in the region.