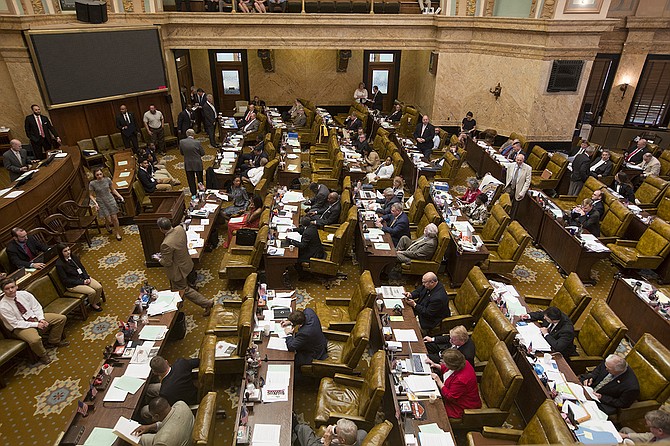 The Republican supermajority could be in jeopardy after four representatives vacated their House seats in 2017; special elections are set for the coming months. Photo by Imani Khayyam.

JACKSON — With four open seats and four special elections ahead, the Mississippi House of Representatives can expect a shake-up in the coming months, ahead of the 2018 legislative session. Three former chairmen left the House this year, some due to appointments, and others due to winning local elections.

Formby represented District 108 since 1993, and on July 25, Pearl River County residents who live in that district will elect a new leader.

Rep. Toby Barker, the former Republican turned Independent candidate, walked away from the House to run for mayor of Hattiesburg—and won. Gov. Bryant set the special election to fill his seat for Sept. 12. So far only one candidate, Casey Mercier, has submitted qualifying papers to run for that seat, Secretary of State spokeswoman Leah Rupp Smith said. Candidates will not officially qualify until the State Board of Election Commissioners meets next week.

The deadline for candidates to submit papers to qualify is next Monday. Three other candidates have indicated interest in the seat, The Hattiesburg American reports.

Rep. Barker chaired the Performance Based Budgeting Committee but also played key roles on both the House Education and Appropriations Committees.

Rep. Alex Monsour, R-Vicksburg, announced he would leave the House after winning an alderman seat in Vicksburg. Monsour chaired the Ports, Harbors and Airports Committee.

Rep. Tyrone Ellis, D-Starkville, who served in the Legislature since 1980, retired this year leaving an open seat. Special elections for both Monsour's and Ellis' seats are set for Nov. 7. The deadline to qualify as a candidate in both the elections for District 28 and 54 is Sept. 18.

The departure of four representatives, three of them Republicans, means the supermajority of the House is in jeopardy. It also means Speaker Philip Gunn has some chairmanship roles to fill.

"All that's probably going to come after the special elections and closer to session time because it's a lot of shifting around," Meg Annison, Gunn's director of communications, told the Jackson Free Press.

This story has been updated to show that candidates can submit papers to qualify to run for a special election, but are not officially qualified until the State Board of Election Commissioners says so. Email state reporter Arielle Dreher at [email protected].