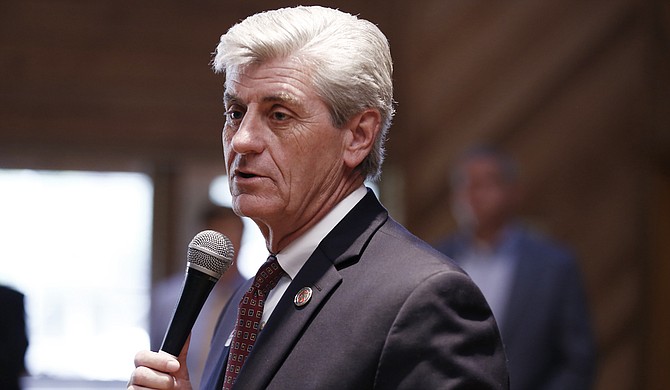 Gov. Phil Bryant is supporting legislation to scrap the state's art commission and bring it under the purview of the Mississippi Development Authority, which the governor controls. Photo courtesy Mississippi Arts Commission Photo by Imani Khayyam.

JACKSON — The Mississippi Legislature could abolish the state's art commission this year, with two bills still alive in both the House of Representatives and the Senate that would roll it under the purview of the Mississippi Development Authority.

Senate Bill 2611 would transfer "all duties, responsibilities, authority, power, assets, liabilities, contractual rights and obligations and property rights" of the commission to MDA, as well as establish an advisory council in the commission's place.

MDA deferred to the governor's office when asked about the bill and said in a statement, "The Mississippi Development Authority will perform all duties and responsibilities designated by the Mississippi Legislature."

The governor's office did not respond to requests for comment by publication time, but this morning on the Paul Gallo radio show, Gov. Phil Bryant told Gallo that he does not want to do away with the arts commission altogether but thinks an advisory board could serve in an "advisory support manner." Bryant mentioned the state's tourism department, which is currently under MDA's purview, doing a great job.

The governor currently appoints all the state's arts commissioners, and the 15 members serve staggered five-year terms. Carol Puckett, former chairwoman of the commission and a current commissioner, told the Jackson Free Press that she does not know what prompted the legislation and said the commission was "surprised and shocked" to hear about the bills.

Puckett said she believes that what the arts commission and MDA do are totally separate, and the commission functions as an "apolitical" organization, while MDA is under the executive branch. The commission administers grants to artists and communities around the state that help operate theaters, fund art installments and pay artists, just to name a few.

"The outpouring of support that the arts commission has received over the past few days has been very organic because different artists and people who receive the grants and small communities and arts councils have all gotten on board through social media," Puckett told the Jackson Free Press today. "And there's been a large public outcry because the arts commission affects so many communities."

The bill does not appear to have unilateral Republican support in the statehouse. On his Twitter account, Sen. Gray Tollison, R-Oxford, wrote: "I support Arts Commn & oppose SB2611 that relegated MAC to gov agency serving imprt but different role for state. MAC needs to stay put."

Members of the art community throughout the state have reacted negatively to the proposed legislation as well. Prominent Mississippi author Michael Farris Smith wrote a letter opposing the bill and sent it to several lawmakers.

"I'm asking you to please vote to keep the MAC intact. Besides being a novelist and someone who has benefited from the MAC's support, which has advanced my career and allowed me to get to a level where I can be a proud representative of Mississippi when I have done book events across this country, in France, and the UK, my children benefit so often from programs supported by the MAC," Smith wrote.

The Legislature created the Mississippi Arts Commission back in 1968. The commission is the state's "grant-making and service agency for the arts," its website states, and it receives not only state funding but also federal funding from the National Endowment for the Arts to provide arts programming throughout the state. For Farris Smith, that means art and theater camps in Columbus that his daughters participate in.

"My daughters participate several times a year, and the room is always full of children of all ages and colors. So you see this is not just an opportunity for art, these experiences foster community, stewardship, bridge gaps between us, and help children identify their passions. It brings our children together, and brings our parents together, and helps promote such goodwill in a time where we don't often enough hear of such things," Farris Smith wrote in his letter.

Malcolm White, the commission's executive director, did not return requests for comment by press time. The Senate version of the bill now goes to the Appropriations Committee, which is scheduled to meet tomorrow. The House version of the bill, House Bill 1325, passed through one committee but must pass through the Appropriations Committee, which meets later today, in order to stay alive. The deadline for bills to get out of committee is Tuesday.