No Dismissal, a Judge and an Inmate in Smith Trial | Jackson Free Press | Jackson, MS

No Dismissal, a Judge and an Inmate in Smith Trial 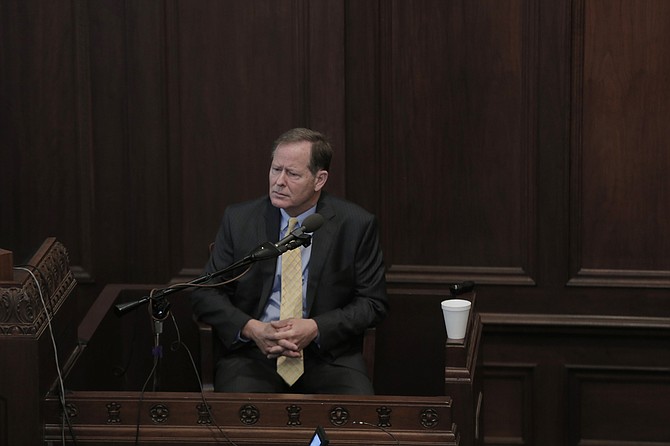 During the the first week of the Hinds district attorney’s trial, an attempt to dismiss the case and the testimonies of Christopher Butler and Judge Jeff Weill (pictured) revealed more of the central tensions in the Smith case. Photo by Imani Khayyam.

JACKSON — The exact extent to which a prosecutor can go to prove his claim that a prisoner is innocent is central to the State trial of Hinds County District Attorney Robert Shuler Smith.

"A prosecutor has the responsibility of a minister of justice and not simply that of an advocate," the Mississippi Rules of Professional Conduct section concerning the role of the prosecutor states, which both sides regularly brought up in the trial.

"This responsibility carries with it specific obligations to see that the defendant is accorded procedural justice and that guilt is decided upon the basis of sufficient evidence. Precisely how far the prosecutor is required to go in this direction is a matter of debate and varies in different jurisdictions," the rules continue.

The trial boils down to how exactly the district attorney should carry out that responsibility—and the veracity of his reasons for trying to free Christopher Butler.

What Smith did in the months before his arrest in June 2016 counts, and whether it qualifies as illegal aiding and assisting a criminal defendant, is the central question of the trial. The prosecutors outlined the allegation in their jury instructions: that Smith assisted Christopher Butler by meeting with him in jail, by providing advice to his attorney and by "other means seeking the release of Butler from jail."

Assistant Attorney General Bob Anderson instead argued that a person of "common intelligence" could discern clearly what the words "aiding" and "assisting" entailed, even stating that the prosecution had "plenty of evidence" that Smith made attempts to free Butler.

Roberts, a retired appellate judge, said he was concerned with ruling on the constitutionality of the wording of the law from the bench, adding that approving the dismissal Waide wanted would essentially a judge legislating. He denied the defense's motion to dismiss, stating that it was the jury's job to determine the parameters of the law and whether Smith violated them.

The two most notable witnesses during the trial last week were the man at the center of the controversy, Christopher Butler, and the judge who described his relationship with Smith as "adversarial," Hinds County Circuit Court Judge Jeff Weill. The defense called both men.

And while the two men sit on opposite ends of the Hinds County justice system, their testimony mirrored each other in the restrictive nature of the scope of what they could say while under oath.

Butler attorney, Kevin Rundlett, repeatedly interrupted the court to prevent his client from potentially releasing information that could hinder his defense in each of the several charges he faces, including several drug-possession charges from a 2011 Mississippi Bureau of Narcotics raid on the home he shared with his then-girlfriend Kwanza Hilliard, as well as wire-fraud charges the attorney general's office filed against him earlier this year for embezzling money through his job at Mega-Mattress.

Butler, who said that he was in solitary confinement for five months in Rankin County on the order of MBN, repeatedly invoked his Fifth Amendment right not to testify against himself, at the behest of his attorney. He was unable even to discuss the two trips Smith made to see him in the Raymond jail in May outside the presence of his then-attorney, Sanford Knott.

Judge Roberts even recognized the tension between enforcing Smith's due-process rights and the rights of the accused, Butler, stating that he had no "crystal ball" to see whether the statements made on the stand could come back to hurt Butler in future proceedings. Waide pushed for the testimony in order to help Smith.

Weill's appearance, on the other hand, was unique for a number of reasons, including that rarely do judges take the stand, due to the privileged nature of the judicial thought-process and restrictions against testifying about cases that appear before the judge. His own attorney, Frank Trapp, objected to questions from Smith's attorney, mostly concerning Weill's thoughts or opinions about the drug charges Butler still faces in circuit court.

Judge Weill, a former Jackson councilman from Ward 1, did say on the stand that he and Smith had difficulties on several occasions, including an incident where Weill ordered a cell phone belonging to Smith's assistant confiscated during a capital-murder case earlier this year. Smith then later showed up in Weill's chambers with a television crew, demanding that Weill return the cell phone. Weill said he received "threatening" text messages from Smith later that same day. As a result, he said, he entered a complaint against Smith.

Weill is the Hinds circuit judge who denied Smith's attempts to drop the drug charges against Butler.

As the Jackson Free Press goes to press on Tuesday, Jan. 3, the defense has just rested after testimony by Butler's family members and Ward 3 City Councilman Kenneth Stokes. See full daily coverage at jfp.ms/DAFiles and on Twitter at @tims_alive. Email city reporter Tim Summers Jr. at [email protected] with tips or comments.