Lawmakers Use Templates to Target Welfare Fraud, Focus on Recipients, Not Providers 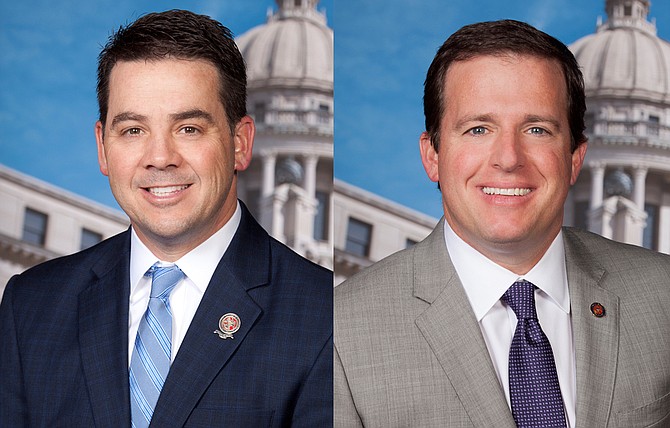 JACKSON — Lawmakers seem serious about addressing welfare reform this year, potentially making it both harder to get benefits and then to stay on the rolls once a recipient has a job. But critics say they are not targeting the mismanagement of dollars where it actually occurs.

In both the House and the Senate, lawmakers passed versions of the Mississippi Welfare Fraud Prevention Act, intended to tighten security and scrutiny of eligibility applications for welfare benefits, namely Medicaid and the Temporary Assistance for Needy Families and Supplemental Nutrition Assistance Program. The legislation would require frequent monitoring to ensure that those who disqualify—say after getting a job—are taken off the rolls.

Sen. Josh Harkins, R-Flowood, authored the Mississippi Welfare Fraud Prevention Act in the Senate, which is almost identical to old model legislation from the Foundation for Government Accountability, a nonprofit think tank focused on welfare reform and "stopping the scam." 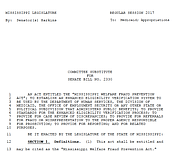 Nicholas Horton, senior research fellow at the foundation, said the organization wants to ensure "limited taxpayer resources are available for the most vulnerable." The foundation works in about 35 states directly, and while it has no point-policy people in Mississippi, the model legislation for an older version of the group's Welfare Fraud Prevention Act is almost nearly identical to Harkins' bill.

A similar bill from the House, called the Medicaid and Human Services Transparency and Fraud Prevention Act," uses some of the model bill's language with added sections dealing with the Temporary Assistance for Needy Families and Supplemental Nutrition Assistance Programs. Rep. Chris Brown, R-Nettleton, says his bill, House Bill 1090, took the best practices from several states for enhanced verification. Brown told the Jackson Free Press that the bill does not change any federal regulations and is an attempt to get waste and fraud out of the state's system.

"The main thing is to take care of those that are most needy in our state because if we keep running deficits (with the Medicaid budget), they're going to start cutting coverage ... if we don't get the fraud and waste out of there, then those that are truly needy will start getting cut," Brown told the Jackson Free Press.

Horton says more than half the fraud in the United States is due to eligibility issues, which explains why the legislation suggests enhanced screening for welfare beneficiaries. It suggests that the applicant must provide the following information to determine their eligibility: income, employment status, immigration status, residency, enrollment in other public assistance programs in Mississippi and other states, financial resources, incarceration status and death records.

The Division of Medicaid already collects most of this information already, however, and Senate Bill 2330 would require applicants to be authenticated through a "knowledge-based quiz consisting of financial and/or personal questions" to ensure that the person is who he or she says.

Horton points to states like Arkansas, where after an audit, tens of thousands of people were kicked off the welfare rolls for being ineligible. The Foundation for Government Accountability's "Stop the Scam" report says that 24 percent of those Arkansas residents on Medicaid did not have the proper documentation to establish eligibility.

The question is whether or not Mississippi has a fraud problem. The answer to that question differs depending on whom you talk to. The current numbers indicate that the state does not have a fraud problem, but those promoting welfare reform believe the current reporting systems are not adequate enough to detect the actual fraud. The Division of Medicaid's Office of Program Integrity investigated 120 cases in 2016, referring only 12 of those to the Medicaid Fraud Control Unit. That number is a decrease from the previous fiscal year when the office investigated 248 cases, resulting in 15 sent to the fraud unit.

Roy Mitchell, the executive director of the Mississippi Health Advocacy Program, says the real fraud is on the other side of Medicaid: with the providers. He said the problem with the proposed legislation is that it targets recipients.

"At worst, it's blatant racism, at best it's corruption," he told the Jackson Free Press.

Mitchell says increasing scrutiny of those eligible for Medicaid will mean likely kicking people off the rolls, even if it is due to an administrative error in an application.

"I'm very concerned about the due-process implications of this for recipients," Mitchell said. He said the bills do not make sense when lawmakers have repeatedly griped about Medicaid's budget constantly increasing, these bills would add potential expense to contract with a third-party vendor as well as add another level of bureaucracy. Mississippi's Division of Medicaid partners with AdvanceMed to get monthly reports on data, its annual report says. AdvanceMed is not technically a third-party vendor, but the partnership is something that the Centers for Medicaid and Medicare Services provides to states on an optional basis.

When the Senate took up Senate Bill 2330, Medicaid Committee Chairman Sen. Brice Wiggins, R-Pascagoula, presented the bill. He said that while the Division of Medicaid has its own system to determine eligibility, "I think we can all agree that it's not efficient and doesn't operate at an optimum level," he told the Senate. 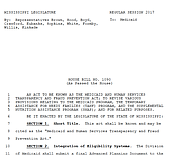 Sen. David Blount, D-Jackson, questioned the part of the bill that requires the state's Division of Medicaid, Department of Human Services and the Office of Employment Security to hire a third-party vendor to develop an enhanced system of verification. Blount asked why the bill does not address fraud on the provider side instead of just targeting the welfare recipient.

"Would you agree with me that the money involved in Medicaid fraud is overwhelmingly with the providers and not with the patients? That's where the real money is?" Blount asked Wiggins.

"I would agree that there is fraud on both of those levels, to your point," Wiggins responded.

"... A version of this bill passed in other states—and states, I believe, are the laboratories of democracy. He pointed to states like Arkansas and Ohio, "where they found upwards of 100,000 people collecting Medicaid benefits that they weren't entitled to."

"I don't think there's anything wrong with being proactive to cut down on fraud in our system," Wiggins said.

House Bill 1090 contains an amendment that would hold Medicaid providers accountable as well for reporting fraudulent numbers of Medicaid recipients they treat or services they provide, while the Senate version does not. The bill will likely go to conference if both sides of the statehouse keep the others' version alive.

Mitchell said provider-level fraud occurs when hospitals or clinics bill the Division of Medicaid for patients that do not exist or for inappropriate services to get more money. Additionally, Mitchell says, welfare and Medicaid are not the same thing.

"There's this notion that Medicaid is equated with welfare and the recipients are undeserving, while our Medicaid program is vilified as being this huge expense in the state budget," Mitchell said. "(But) it's an economic driver because of the multiplier, we get a three-to-one match on the Medicaid program."

"We get more money back from the federal government than any other state ...," Mitchell added. "Medicaid is not a problem, it's a solution."

The Division of Medicaid has a system in place to address eligibility and fraud. In fact, the requirements addressed in both Senate Bill 2330 and House Bill 1090 do not cover all the things that the division checks currently, its policy manual shows. Those applying for Medicaid benefits must give their Social Security numbers, relationship status, age, and reveal other benefits they or their children and immediate family receive. Additionally, the division checks up on recipients on an annual basis to ensure that they are still eligible for Medicaid.

"Life changes more than once a year," he said.

The proposed bills would require state agencies that administer welfare benefits to have real-time monitoring of welfare recipients that would detect those life changes.

Mitchell said the bill is based on anecdotal evidence from other states with little proof that Mississippi has a fraud problem.

"We've come up with a solution for a problem that doesn't exist," he said.

Clarification: This article has been updated to reflect that AdvanceMed is not technically a third-party vendor. Read more state news at jfp.ms/state. Email state reporter Arielle Dreher at [email protected].