Senate Attempts to Put Governor in Charge of Mental Health 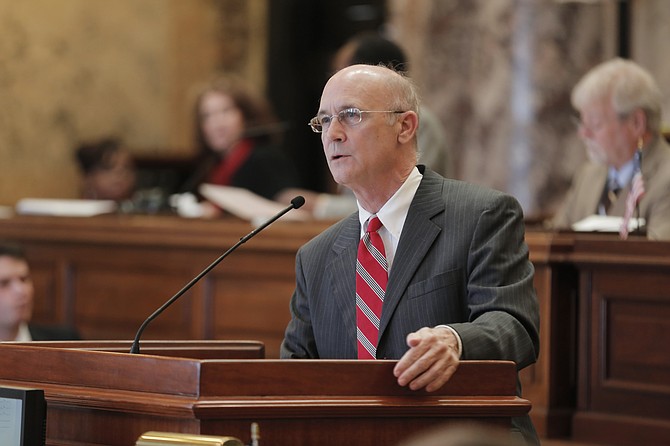 Sen. Hob Bryan, D-Amory, spoke vehemently against Senate Bill 2567, which would put the governor in control of the state's mental health department instead of its board. Photo by Imani Khayyam.

JACKSON — Legislation to move the Department of Mental Health under the policy direction of the governor passed the Senate by one vote on Feb. 9, after a contentious debate and bi-partisan opposition to the bill that initially included the Department of Health and Rehabilitation Services.

Sen. Hob Bryan, D-Amory, led the charge against the bill Thursday, entering a motion to recommit (kill) the bill. Bryan told senators that if the state's board of mental health, which currently governs DMH, is not doing its job, there are ways to fix that without turning the agency over to the governor.

"We have in the state of Mississippi, career people who have dedicated their lives to the people of the state .... They deserve civil-service protection," Bryan told the Senate. "They don't deserve to be turned over to the politician who will hire and fire for political purposes, and you know that's exactly what all of this is about."

The bill would enable the executive director of DMH "to combine or abolish employee positions as necessary" and "to reorganize such offices, services, programs or other activities so as to achieve economy and efficiency if he finds such action to be in the public interest."

Sen. Buck Clarke, R-Hollandale, who presented the bill said there are already politics within the state's largest agency, pointing to DMH closing alcohol-dependency beds last year while simultaneously giving more than $11 million in pay raises to employees. Clarke said that only 53 direct care workers, some of the lowest paid in DMH, got pay raises last year.

"That's what the board chose to do, the board and management chose to put their money (in pay raises) ... and it was mentioned that we don't need politics to get involved, but as I mentioned, they made $11.4 million in pay raises, and at the same time they chose to close alcohol dependency beds," Clarke told the Senate Feb. 9.

Clarke's main point was that oversight was needed in the state's largest agency. He also brought up the state's pending litigation, two lawsuits combined into one in December, one for not providing mental-health services for children in the state and one for violating the Americans with Disabilities Act Olmstead clause to provide more community-based services to adult Mississippians who seek mental health care.

"The Obama administration's Department of Justice in the last eight years has disagreed with how our Department of Mental Health was being run, that's where these lawsuits come from .... DOJ disagreed with how we were handling and tending to our patients in the mental-health system," Clarke said. "The DOJ authorized an independent study to look at how we delivered mental health care, and one of the main points was how the executive director and the control was not under the governor ... their recommendations to Mississippi was put it under the direction of the governor."

Courts sealed the independent study, the Technical Assistance Collaborative report, even after The Clarion-Ledger unsuccessfully sued in 2015 to see its contents; the court entered a protection order sealing the contents. Separately, the Jackson Free Press was denied access to a copy last year even after negotiations between the Department of Justice and the state were over. 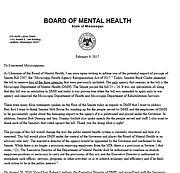 Richard Barry, the chairman of the state's mental-health board, wrote a public letter concerning Senate Bill 2567 on Feb. 9, commending Sen. Bryan and others on speaking out against the bill.

In his letter, Barry refutes the $11 million in pay raises, saying the actual number was $7.1 million after a decrease in personal-service expenditures in the agency. Barry's letter states that he met with governor back in August and "had a very positive discussion about the agency with no complaints voiced by the Governor."

He writes that the board invited Lt. Gov. Reeves and the governor to come and tour DMH's programs, and they had not done so. Barry also refutes the idea that DOJ recommended the department go under the governor's control.

"We know of no recommendation from DOJ to that effect," Barry wrote.

Lt. Gov. Tate Reeves told reporters later Thursday that he supports the bill and that "we need someone who's accountable to the people to be responsible."   The bill was only passed by one vote on Thursday, with three senators absent or not voting. It was held on a motion to reconsider, so to stay alive that motion must be tabled by Monday.