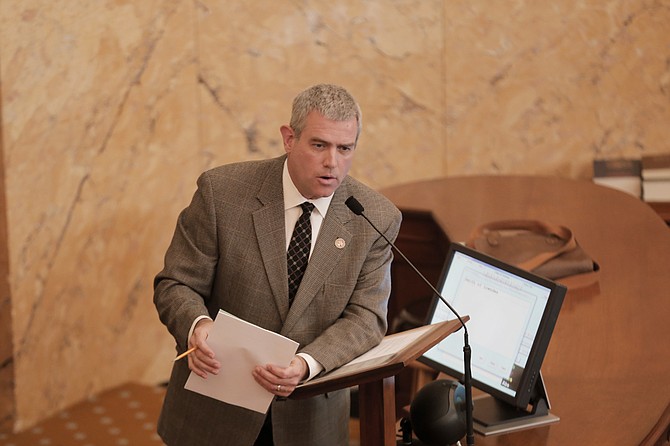 House Speaker Philip Gunn, R-Clinton, authored a bill that will lessen restrictions and reporting requirements on the state's "A" and "B" school districts—the House passed the legislation Monday, Feb. 6. Photo by Imani Khayyam.

JACKSON — School districts with an "A" or "B" accountability ranking would be exempt from certain reporting requirements if House Bill 1224 becomes law. The House debated the bill for well over an hour Monday, with lawmakers from both sides of the aisle expressing concern over exemptions and incentives for teachers in the state's best school districts.

House Speaker Philip Gunn, R-Clinton, whose district contains the A-rated Clinton Public School District, authored the legislation, which would exempt "A" and "B" districts from reporting student grades to the Mississippi Department of Education. Additionally, the bill would exempt the state's highest-performing districts from annual audits of their student codes of conduct or discipline plans. Teachers in high-performing districts would also not be required to attend continuing-education courses.

Rep. Brad Touchstone, R-Hattiesburg, presented the bill on the floor on Monday, Feb. 6, drawing several questions. He said the bill would enable "A" and "B" districts to be innovative and to "provide incentives to keep good teachers in those districts."

Some Democrats expressed concerns with the legislation because of the potential impact the bill could have on the state's "C," "D" and "F" districts. "I suggest before we take up this legislation that we consider the adverse impact it will have on the whole of the state," Rep. Edward Blackmon, D-Canton, told Touchstone.

House Bill 1224 would also allow school districts to offer incentives for eligible teachers like student-loan forgiveness, housing and moving assistance in the same manner as the Critical Needs Teacher Shortage Act, which is aimed at recruiting teachers to the state's worst-performing districts.

Rep. John Hines, D-Greenville, asked Touchstone if he thought the bill would encourage teachers to cherry-pick and jump from district to district based on the new incentives. Touchstone disagreed with the assumption that all teachers would do that, and he said House Bill 1224 was drafted after consultation with superintendents in the state's high-performing school districts.

Hines, speaking on the bill before it went to a vote, said the bill was "free agency gone buck wild" comparing it to national sports leagues where one team, or in this case, one school district "is going to get loaded up and one will be struggling on the bottom."

"This is a wolf in sheep's clothing ... when you allow free agency to come in to a system that has standards, you lower the playing field for certain field," Hines said.

Rep. John Moore, R-Brandon, who chairs the House Education Committee, said the State works hard to lift itself from the bottom. He said MDE will probably not receive any more money for operations because of the tight budgets this year, and mentioned past incentive programs that benefit the state's low-performing districts. The bill passed by a vote of 79-41.