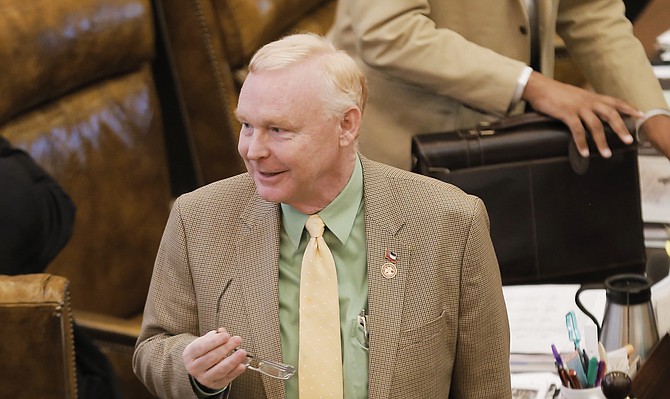 JACKSON — UPDATE: All three education bills discussed below: House Bill 145, House Bill 203, House Bill 2611 and House Bill 280 (which would re-organize the Arts Commission), all died in committee after the Jackson Free Press went to press on Jan. 31.

Never mind changing the state's education-funding formula; both the House and Senate education committees have passed several bills that would affect student funding, school-board autonomy and a school's responsibility to fly the state flag.

School districts would have to give away ad valorem dollars to whatever school district their students transfer to if House Bill 145 becomes law. When this story was initially published, the deadline for bills to get out of committee had not passed. House Bill 145 died in committee on Tuesday.

The bill basically implements a "student-based" funding mechanism without touching the Mississippi Adequate Education Program. Under current state law, students are allowed to transfer to any school district with consent from the receiving and the transferring district. This bill would require school districts whose kids are leaving to send ad valorem taxes to the receiving district on behalf of the children that district is accepting. Both Democrats and Republicans on the committee voiced concerns about the measure.

Rep. Dana Criswell, R-Olive Branch, said this bill would help school districts receive transfer students without hesitation because sometimes money concerns—such as how they would pay for students not contributing ad valorem taxes to the district millage—caused hesitation.

"I do know that there's probably some children being hindered by this because the receiving counties can't afford to take them," Criswell told the House Education Committee Jan. 25.

Criswell said students usually transfer due to programs offered in one district but not in another. Lawmakers who live in counties that have voted to increase taxes to pay for their schools were concerned about the bill.

Criswell said the money used for bonds are excluded in the bill, but reiterated that "whatever money is being used to educate the child" is the amount that would follow the child to a transfer district. The bill passed by a voiced vote that seemed at least tied if not a "nay" vote, based on volume, but no one asked for a role call in time, and the legislation passed to the House Revenue Committee.

The House Education Committee also passed legislation that would make it more difficult for school districts to raise millage to pay for their schools, something districts are allowed to do up to 55 mills. Millage is the amount of ad valorem or property tax revenue a school district can leverage to help pay for school expenses. House Bill 203 also died in committee and did not make it to the House calendar.

Criswell introduced the bill, referring to his home school district of DeSoto County, saying the school board there often hides behind the county board of supervisors when asking for millage increases.

"What this does is any time the school board comes and asks for more money it will create a situation where (if) they need to raise the millage, then it goes to the vote for the people, so the people of the county get a say on whether they want to increase their taxes in order to go to the schools," Criswell said.

Rep. Toby Barker, R-Hattiesburg, pointed out that other actions by county boards of supervisors or municipalities are not subject to such stringent regulations. Criswell said his goal is to give the "loudest voice for the people possible."

"Don't they have that voice when they elect their school-board member or the mayor who appoints them or the supervisor appoints them?" Barker asked.

"It's my opinion that the school board hides behind the supervisors ... so this puts them out front to say 'we want it and here's why,'" Criswell said.

The school board would have to pay for the referendum, so the taxpayers could vote on the increase, the bill says. Rep. Jarvis Dortch, D-Jackson, said the way he reads the EdBuild recommendations would mean local communities contribute more for education. With that in mind, he asked Criswell if the bill "hamstrings those districts, or makes it more difficult" for them to leverage those funds.

Criswell said his bill has nothing to do with the EdBuild recommendations but then said the short answer was "yes" to Dortch's question. House Bill 203 barely got out of committee by a vote of 12-10, with both Democrats and Republicans voting against it. It will need to pass through the Ways and Means Committee too, which was meeting as the Jackson Free Press went to print.

School districts could lose their accreditation for not following the Mississippi Constitution and state code if House Bill 280 becomes law. Rep. Mark Formby, R- Picayune, introduced the bill, saying he wanted deal with anonymous complaints he gets from teachers and administrators who are fearful of retribution if they report illegal actions in their districts. This bill did not get out of the Constitution Committee and is now dead.

The bill gives districts 30 days to resolve a complaint before losing their accreditation if the Mississippi Department of Education find the district out of compliance with any constitutional provision. Lawmakers from both sides of the political spectrum took issue with this bill, and Dr. Carey Wright, the state superintendent, explained a process exists for vetting complaints.

"I get letters all the time ... if it lists specifics, and there are many of those letters, then I forward them to the appropriate office, (and) they are investigated," she told the House Education Committee on Jan. 25.

For federal violations, Wright said she had authority to enforce the rules, but districts and their superintendents usually resolve complaints about state regulations. Formby said his bill would give her the power to enforce provisions of Mississippi constitutional violations.

Rep. Dortch brought up the state flag as an example of something in the constitution that could draw school penalties.

"(Under this bill) you could bring a complaint against a district that chooses not to fly the state flag and have them lose their accreditation?" Dortch asked Criswell who explained the bill.

"... It is in the law, if you don't, I mean, honestly, if you don't like it you should repeal the law and not just let the people go around it," Criswell said.

Wright told lawmakers she actually had received letters complaining that school districts were not flying the state flag, and because it is a violation, she notifies the district's superintendent about the complaints. Beyond that notification, Wright has no authority to make the district comply, however.

Formby said this legislation would change that. The effort initially failed on a roll-call vote, but then someone called for a recount. The bill was then set aside because the meeting needed to end before the House went into session, and then when the committee came back later, it took up the bill and passed it. The proposed law will have to pass through the House Constitution Committee before Jan. 31 to get on the calendar in time. By press time, it was not clear if this would happen or not.

Other Bills to Watch

House Bill 555: The House originally voted down this bill that would limit the attorney general's power to pursue legal actions that would cost the State over $250,000 without permission from a commission made up of the governor, lieutenant governor and the secretary of state. After the bill failed, Rep. Mark Baker, R-Brandon, who has authored and introduced this bill in past legislative sessions, entered a motion to reconsider. The bill came up for a vote again, and this time passed by a vote of 63-56, with three lawmakers not voting. Now the bill heads to the Senate, where Lt. Gov. Tate Reeves holds its fate and will assign it to a committee.

Senate Bill 2567: This monster bill would move the state departments of health, mental health and rehabilitation services under the governor's purview, as opposed to their current governance by individual boards. The bill would not dissolve the boards, but instead makes them advisory in nature only. The bill also removes the three state agencies out from under the personnel board. After a few questions, the Senate Appropriations Committee passed it out of committee last week.

Senate Bill 2611: This bill would abolish the Mississippi Arts Commission, dissolving the commission under the purview of the Mississippi Development Authority, creating an advisory council in its place. The governor, who controls MDA, would have control over the funds that go into arts in the state. The goal of the bill? "To promote Mississippi's economic development through the arts." It died in committee on Jan. 31.

Senate Bill 2710: The return of the "sanctuary cities" ban bill has passed to the Senate calendar. It would delegitimize ordinances that some cities have adopted to disallow their law-enforcement officers to check a person's federal immigration status. Sen. Sean Tindell, R-Gulfport, passed his bill out of his Judiciary A Committee last week. The bill does not have penalties but instead just makes those policies invalid and void if the bill passes. Similar measures with penalties for universities and entities with sanctuary policies were introduced in the House but it remains to be seen whether those will make it to the calendar or not.

The deadline for bills to come out of committee was Tuesday, Jan. 31, as the JFP went to press with this issue. Some bills may have died since then. Check jfp.ms/state for updates.