How Did Your Representative, Senator Vote on Tax Reform? 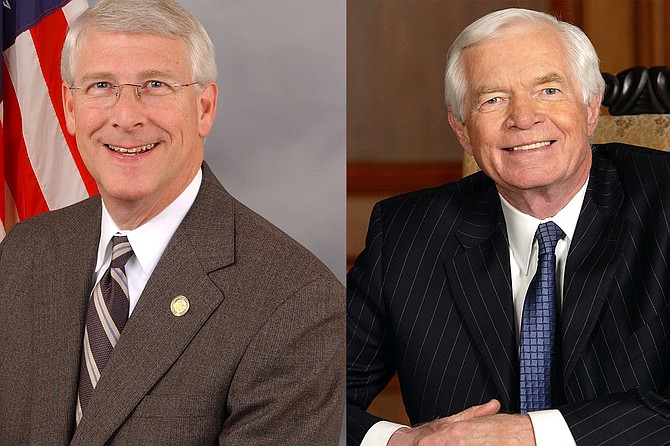 JACKSON — "We are about to change some really big things," House Speaker Paul Ryan said Tuesday afternoon on the House floor. The U.S. House of Representatives passed the Republican tax-reform package that afternoon predominantly along party lines (then had to re-pass it on Wednesday by a vote of 224-201 after some technical changes from the Senate). The Senate narrowly passed the bill with a vote of 51-48. President Donald Trump signed the bill into law this morning before leaving for Mar-a-Lago.

The plan will reduce national revenue by $1,649 billion as well as increase the budget deficit by $1,455 billion in the next decade, the analysis shows.

Republicans supporting the plan pushed the impact for families and individuals who get to keep more of their paychecks. However, even the Tax Foundation notes "the temporary nature of the majority of the individual income tax changes" in the bill. A Tax Policy Center analysis of the bill shows that higher income households receive larger tax cuts than lower-income households in the legislation.

The bill includes a 20-percent tax deduction that applies to the first $315,000 of joint income earned by all businesses organized as S corporations, partnerships, LLCs and sole proprietorships, the website House Republicans created for the bill says.

Democrats largely opposed the legislation, in part because it favors businesses and corporations, not everyday people in the long run. The bill also eliminates the individual mandate for Americans to have health insurance from the Affordable Care Act.

Here is how Mississippi's congressional delegates in Washington voted and responded to the legislation:

Sen. Roger Wicker, who continues to praise Trump in most of his social-media posts, celebrated the tax-reform legislation on his Twitter account.

"This is an accomplishment of historic proportion," Wicker said in a press release. "Working with President Trump, Congress has successfully overhauled the tax code to make it simpler, fairer, and smarter. Starting next year, Mississippi families will begin to see more take-home pay and an economy that continues to pick up steam. Job creators and small businesses—the lifeblood of our economy—will have more capital to invest and innovate. This is a big win for the American people built on conservative principles."  Sen. Thad Cochran also voted for the tax-reform legislation, saying it will help the economy grow.

"I am optimistic that small businesses in Mississippi will take advantage of incentives in the bill that can help them grow. Corporate tax reforms will help companies be more competitive globally, invest more at home, and hire more American workers," he said in a press release. "I look forward to the bill becoming law."

Republican Rep. Trent Kelly voted in favor of the tax-reform legislation and spoke with SuperTalk radio host J.T. Williamson about the legislation on Dec. 21. "Our individual taxpayers, especially the folks of Mississippi, are going to get a huge tax break next year, but it (also) allows our companies to compete and allows companies to come back to the U.S. and reinvest their capital here," Kelly said.

Rep. Bennie Thompson, the state's only Democratic public official, was the only Mississippi congressional lawmaker to vote against the legislation.

"I will be voting NO on this disgusting piece of legislation that only benefits this country's top 1 percent, on the backs of hard-working Mississippians and Americans," he tweeted on Tuesday afternoon. After the vote, Thompson released the following statement on the House's passage of the GOP Tax Bill:

"Looking at the 26 counties in Mississippi's Second Congressional District and looking at the GOP Tax bill, I can say without hesitation there is nothing in this bill that benefits the people of our district," he said. "This bill harms seniors, working people, college students and citizens on fixed incomes. Because of the people outlined above, I voted against this harmful legislation."

Rep. Gregg Harper, R-Miss., supported and voted for the tax-reform legislation, tweeting "BREAKING: The Tax Cuts & Jobs Act has just passed the House. Now, it's headed to the Senate," immediately after the House passed the bill. He links to the House Republican Conference's webpage about the bill on his Twitter account.

Rep. Steven Palazzo, R-Miss., voted in favor of the legislation. "Today, Congress votes to provide relief from the outdated tax code to Americans. Under this plan a hardworking family of 4 earning a median income of $73,000 a year gets #2059more in their wallet," he tweeted on Tuesday, turning the dollar amount into a hashtag.

"President Trump has proven to be a true leader in the face of this daunting task. Many doubted that we could get tax reform passed, but in one year's time we proved by taking on and successfully achieving one of the biggest legislative accomplishments, that we can work together and get the job done for the American people," Palazzo said in a press release after the vote.