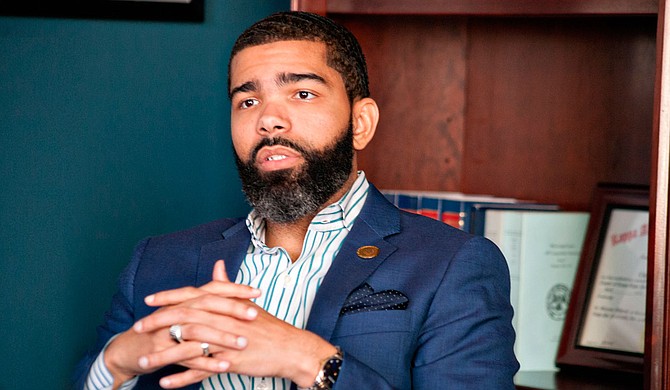 In a special city council meeting at 10 a.m. on December 21, the mayor and the City Council met to discuss the tourist tax. Photo by Stephen Wilson.

JACKSON — The Jackson City Council voted against Mayor Chokwe Lumumba's request to double the local tourist tax this morning from 1 percent to 2 percent on purchases at restaurants, hotels and motels. Instead, the council voted to ask the Legislature to continue the current 1-percent tourist tax that benefits the Jackson Convention and Visitors Bureau past the July 2018 expiration date.

In a special meeting just announced Tuesday night, the city council did not have much time consider the mayor's request. A divided council ultimately decided that showing a unanimous vote to the Legislature was of utmost importance when it became clear that some members were unwilling to ask for the tax increase.

Ward 7 Councilwoman Virgi Lindsay was one of the outspoken members whose frustration with the proposal came from a clear lack of foresight for how the JCVB would use the additional funds. Ward 2 Councilman Melvin Priester Jr., also against the increase, told the council that the JCVB received $3.5 million from the tax last year.

When asked to confirm how the bureau would use a potential $7 million if the tax doubled, JCVB CEO and President Wanda Wilson told the council that she had "no concrete plan right now," and that she wanted get the mayor's support for creating a master tourism plan.

Lumumba told council he has a "cache of ideas that would be helpful for the City of Jackson," and he mentioned that NASCAR had interest in building a racetrack here.

But, the mayor's "bold" ideas, as he coined them, were not enough to convince Lindsay and Priester.

"But I think we today are being irresponsible if we vote to increase this without having a plan," Lindsay said. "This cannot just be about ideas ...." Lindsay also mentioned that the council needed to know "long before this morning" how money from a tax increase was going to be spent before approving a tax increase.

"The issue is, what do we want to charge our businesses?" he said.

The council voted unanimously to keep the 1-percent tax and reinstate the bureau in the 2018 state legislative session. Ward 5 Councilman Charles Tillman was not present.

In April 2015, Gov. Phil Bryant signed a bill that allowed a 1-percent tax on restaurants, hotels and motels to provide funds to the Jackson Convention and Visitors Bureau to carry out "programs and activities" that are "designed to attract conventions and tourists into Jackson, Mississippi," the bill reads. The legislative session begins the first week of the year, and the body will need to approve continuing the 1-percent tax past July, as well as any increases the City suggests. The mayor wanted the council to pass a resolution supporting the doubling of the tax.

This is the second time this year the City has called a last-minute meeting right before a holiday to consider tax raises. On the Friday evening of the Labor Day weekend, the council held another special meeting where it approved a 2-millage property tax increase in a close 3-2 vote, with two city council members not in attendance. The City had announced the pre-Labor Day meeting to media in a faxed alert late the day before.

After a shorter, but still heated and emotional discussion on the City agreeing to ask the Legislature to reinstate red-light cameras, the council voted in favor of the item, with Priester abstaining.

"I don't think this should be the focus of our legislative agenda," Priester said before the vote. "We have bigger fish to fry."

The City also presented that request at the last hour, requiring it to be considered in this special meeting.

The Council also voted to reappoint Ali Shamsiddeen as municipal court judge. He wants to ensure that bonds are issued constitutionally in Jackson, and not punitively, he said.