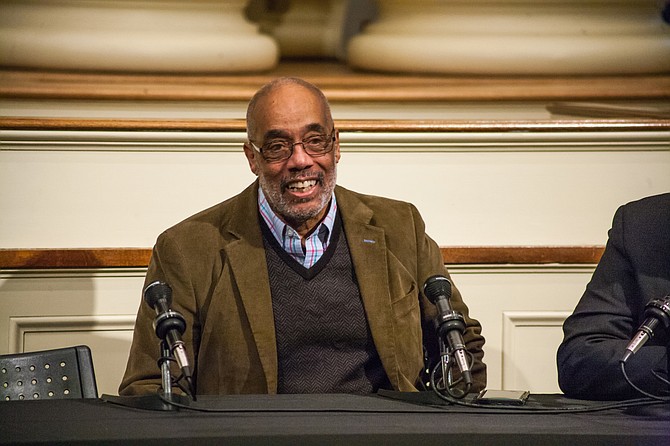 JACKSON — "You're going to Texas for a workshop on civil rights? What's the point in doing that when you're standing right here in Mississippi?"

Civil Rights veteran Charles Cobb Jr. remembers a Tougaloo College student asking him those questions when he stopped in Jackson on his way to Texas in the 1960s. The Washington, D.C., native, now a journalist and an author, said he did not initially plan to come to Mississippi.

"I never made it to Texas," Cobb said at the Old Capitol on Thursday night. Cobb went on to work as a field secretary for the Student Nonviolent Coordinating Committee, known for its integral work during the Civil Rights Movement to help black Mississippians register to vote.

Cobb joined other scholars—Emilye Crosby, Francois Hamlin and Tiyi Morris—on a panel moderated by Randall Pinkston at the Old Capitol on Thursday night to discuss how the Mississippi Civil Rights Movement changed the country.

The formation of the Mississippi Freedom Democratic Party, Cobb said, was one of the pivotal ways the state has changed the country. The party, created in 1964, challenged the all-white Democratic Party at the time. Fannie Lou Hamer was elected vice-chair of the party and brought national attention the violence and struggles of black Mississippians registering to vote. Cobb said the party forced the Democratic Party to change—expanding the roles of people of color and women in politics.

Not everything Mississippi contributed to the Civil Rights Movement is shiny. Crosby, a Claiborne County native, explained how a lot of white-supremacist movements, including the Citizens' Councils, which spread across the South, started here in Mississippi.

"Mississippi led the way on white massive resistance with the establishment of the Sovereignty Commission," Crosby said.

The Mississippi Sovereignty Commission at the Old Capitol on Thursday night was a state-funded and operated (the governor was the chairman) agency that monitored civil-rights workers and movements throughout the state. They funneled money to Citizens' Councils around the state, which worked to keep schools and communities segregated long after the Brown v. Board U.S. Supreme Court decision.

The "Freedom Summer" of 1964, which brought hundreds of volunteers from around the country to Mississippi, had a national impact, too, Hamlin said.

"When (volunteers) went home and went back into their communities, (they) were able to educate on a grassroots level across the country," she said.

Panelists also discussed how, despite the nonviolent protests of the Civil Rights Movement, firearms were necessary for self-defense. Cobb recalled Hartman Turnbow, a Mississippi farmer, telling Martin Luther King Jr. in 1964, "Reverend King, this nonviolent stuff is no good. It will get you killed."