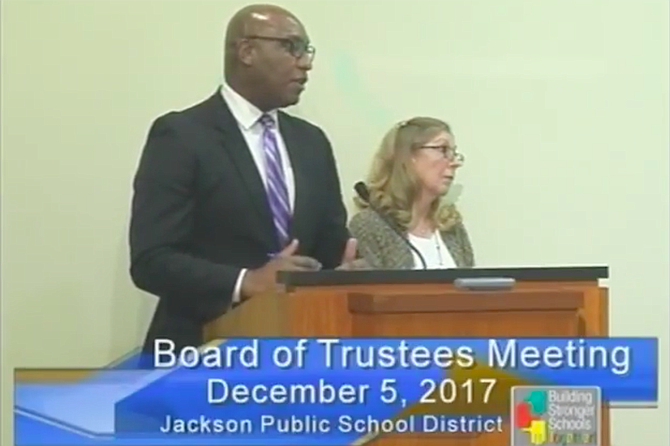 William Merritt (left) and Ann Moore (right) explain the contracts with the Bailey Group to the JPS Board of Trustees at its Dec. 5 meeting. Photo courtesy JPS TV

JACKSON — The atmosphere got tense in the Jackson Public Schools boardroom on Tuesday night as board members drilled question after question at contractors helping the school district with its corrective action plan.

After more than an hour of back-and-forth, the JPS Board of Trustees voted to amend its contract with the Bailey Education Group to withhold remaining funds listed in the contract until the State approves a new corrective action plan, or CAP, in order to ensure that the consultants work with JPS until the Mississippi Board of Education approves the plan in February 2018. This accountability clause was notably missing from the original contract, leaving board members wary of paying an entity with no guarantee that JPS would get its CAP approved.

Bailey contractors assured the board that they were committed to the district and would work as many extra days as necessary without additional pay, as they already have during previous contracts this year, to ensure the district's success. Members of the new school board made it clear that they needed more data and information on all contracts before voting on them. Board members asked for data over and over during the Dec. 5 meeting, and their sense of urgency was potent.

Ann Moore, one of the Bailey contractors, explained to the board that their role in helping the district with the CAP is advisory in nature. Moore and other Bailey contractors are advising JPS "standard leaders," tasked with making sure each school in the district is in compliance with accreditation standards.

"In the original corrective plans, the actions were to develop policies, plans, etc., ... so the district did a really good job on that piece," Moore told the board. "The disconnect is implementing successfully, continuously, and having the support and documentation that verifies compliance—that's the hard part. The bigger you are, the more difficult it is to get it right every day."

Still, board members pressed contractors and district officials to provide the board with data to ensure that the district is getting its money's worth for the contract.

Interim Superintendent Freddrick Murray said his staff would provide that data and information to board members going forward.

Unlike other school districts on probation that have to clear one to three accreditation standards by next July, JPS must clear 24 standards. The State found JPS to be out of compliance during the year-long investigative audit, which triggered the Better Together Commission and the new JPS board this fall.

The JPS Board of Trustees needs to approve the new CAP at its next December meeting, in order for it to be ready for the Commission on School Accreditation in January. Moore said the CAP will likely take three to four drafts to get to a final draft that will satisfy the accreditation office.

William Merritt, JPS executive director of school improvement, says he thinks the district could clear some of the standards now, but JPS administrators cannot invite MDE back to the district until its new CAP is approved.

"We appreciate how difficult this is, and everyone is under the spotlight. ... I don't want to receive what your) team perceives to be the final draft shortly before we're expected to vote on it," Hairston told Murray. "I would rather see interim updates ... because if I get 600 pages out of board policy at a time when we're supposed to receive materials, it's going to be difficult to approve. ... You've got to get us this information early enough."

The board's thoroughness was not reserved for contracts relating to the CAP alone, and it tabled a motion to approve a contract for a legislative lobbyist later in the meeting, saying board members needed more information about how JPS plans to use the lobbyist and why it is necessary to lobby.