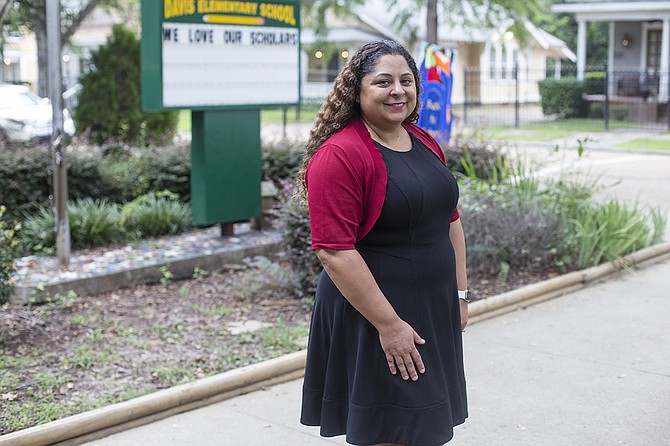 Kathleen Grigsby is the principal at David IB Elementary School, where kindergarteners scored in the top 10 of all Mississippi schools on their literacy assessments. Photo by Imani Khayyam.

JACKSON — Principal Kathleen Grigsby has a reason to be proud: Kindergarteners at Davis IB Elementary in downtown Jackson scored in the top 10 of all schools in the state on the kindergarten readiness assessment for the second year in a row.

All kindergartners in public schools in the state must take the STAR Early Literacy exam, which tests their literacy and numeracy skills. Students are tested at the beginning and then the end of the school year. Student scores indicate their reading levels and abilities—and how much they've improved over the course of the school year.

While Davis students were a bright spot in the statewide results, all Jackson Public Schools kindergartners increased their scores from fall to spring last school year, with the exception of one school, Barr Elementary.

Grigsby attributes her students' success to several factors: her teaching staff, differentiated instruction and the International Baccalaureate curriculum. Teachers at Davis teach using differentiated instruction, which caters to a student's individual learning style and their proficiency in a subject, using data to target where students need to improve. The majority of kindergarteners at Davis IB Elementary enter their classrooms knowing how to read.

The principal said that while the kindergarteners in her school can read at different levels—some barely know all the pre-primer words, while others are reading second and third grade-level chapter books—the fact that they are literate when they arrive is vital.

"The most important thing parents can do is provide their child with a pre-K education, ... that they've been engaged in some kind of developmentally appropriate program," Grigsby said in an interview. "So that usually gives students a leg up, so to speak."

The Mississippi Department of Education rolled out public pre-K collaboratives in some school districts in recent years, and data show they appear to be working. Early childhood centers throughout the state have to meet MDE's early education standards, too.

Jackson Public Schools also offers 24 pre-K programs in several elementary schools, which the school board has applauded and continued to push for this past summer. On average, students in JPS pre-K programs scored above the state's average score on pre-K assessments.

Students in Jackson must apply for the International Baccalaureate program, and they are eligible to do so as early as kindergarten. The program is in Davis IB Elementary, Northwest Jackson IB Middle School and then Jim Hill High School. Children in the schools are considered transfer students in the district, meaning they must abide by transfer policies including keeping good attendance, behavior and academic performance.

Every student who applies to Davis has an opportunity to test for IB—but that is only part of the application. Students have to submit three letters of recommendation, Grigsby said, so she looks at the applicant's entire portfolio.

"One test doesn't define the student; we are looking at a variety of performance-based skills, (like) their writing," Grigsby told the Jackson Free Press.

Davis IB Elementary only has 50 kindergarten slots, in two classrooms. The school accepts applicants in other grades as openings become available, but once a child is accepted into the program, he or she can continue all the way through high school. Grigsby has 266 students currently—and normally has a wait list. The IB program functions like a framework for teachers, who teach six trans-disciplinary units a school year, Grigsby said. Those units help students connect ideas and think about the same concept in different subject areas. Grigsby said her teachers collaborate to ensure students learn and reinforce the same concepts across classrooms and grade levels.

Grigsby is entering her fourth year as principal of Davis this year, and while the students improved on their kindergarten readiness assessments and state testing, she is still working toward improvement.

"Everybody knows that my motto is 'work hard, play hard,'" the principal said. "No matter how much the perception may be and is that we're a thriving school, there's always work to do, and because of that, our school has grown even from last year's data."

Using data, teachers can identify a student who needs extra help quickly. The IB program helps Davis teachers see where students need to grow, as it includes assessments and projects graded on rubrics that students can help create. While Davis IB Elementary is an "A"-rated school, Grigsby said she is not satisfied with that alone.

"We're not just satisfied with being an A-level school and coasting along," she said. "Wherever we are; we're moving that target and striving (for more)."