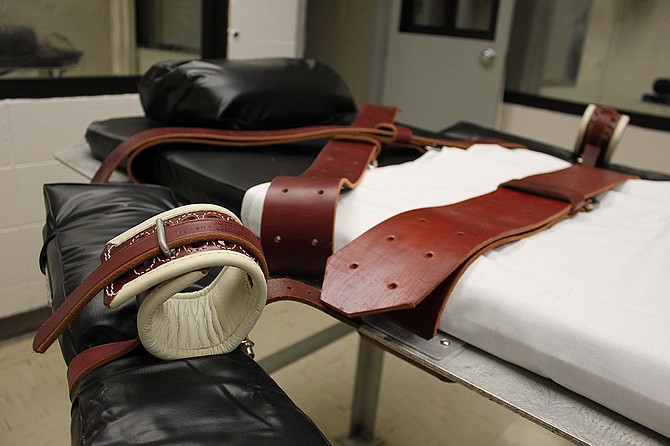 Richard Gerald Jordan, who is the longest-standing person on death row in Mississippi, has filed fresh challenges to the state’s death penalty. Photo courtesy MDOC

JACKSON — The Mississippi Supreme Court has sentenced Richard Jordan to death four times, but with the help of his lawyers, he continues to challenge the state's death penalty method.

In July, Jordan filed his second petition for post-conviction relief, continuing to challenge Mississippi's proposed use of midazolam as a part of its lethal injection. 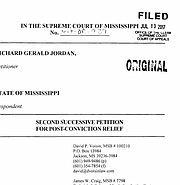 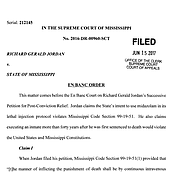 Earlier this summer, the state's high court denied Jordan's first petition for post-conviction relief, which challenged the Mississippi Department of Corrections' use of midazolam as well as the constitutionality of executing an inmate who has been on death row for more than 40 years due to legal delays. Jordan was first tried and convicted in July 1976 for kidnapping and murdering Edwina Marter in Harrison County, leaving her body on a logging trail.

His case continued to face legal hiccups, however, with both court precedent and then the U.S. Supreme Court vacating his death sentence in the 1980s because Jordan had not been allowed to present evidence of "his adaptability to prison." In 2001 the Mississippi Supreme Court affirmed Jordan's fourth death sentence, which he has appealed and challenged since.

This year, the Mississippi Supreme Court decided to ignore Jordan's midazolam challenge, despite three justices agreeing that the case warranted more attention because the Legislature amended its death-penalty statute in the 2017 legislative session.

Previously, state law required the lethal injection's three-drug combination to begin with a "continuous intravenous administration of a lethal quantity of an ultra short-acting barbiturate or other similar drug."

Now, the law requires "the sequential intravenous administration of a lethal quantity of the following combination of substances: a) an appropriate anesthetic or sedative; b) a chemical paralytic agent; and c) potassium chloride, or other similarly effective substance."

The new law further defines an "appropriate anesthetic or sedative" as one that means a substance that "if properly administered in a sufficient quantity is likely to render the condemned inmate unconscious, so that the execution process should not entail a substantial risk of severe pain."

Jordan's latest petition challenges the new law, arguing that midazolam is not "an appropriate anesthetic or sedative." Jordan's lawyer, James Craig, the co-director of the MacArthur Justice Center, argues that midazolam is not capable of making Jordan unconscious like state law says it should. The petition, filed in July, asks the Mississippi Supreme Court to review the facts about midazolam in light of the change to Mississippi's death-penalty law. 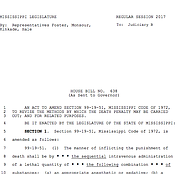 ASA Continuum of Depth of Sedation 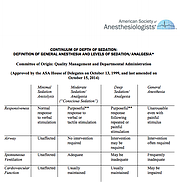 In an expert affidavit, Dr. Craig Stevens, a professor of pharmacology at Oklahoma State University, writes that midazolam is not "an appropriate anesthetic or sedative," because it does not produce the loss of unconsciousness, as it should. Stevens writes that midazolam is a sedative drug but not an anesthetic because "it cannot produce the state of general anesthesia."

The American Society of Anesthesiologists has a standard continuum of sedation that categorizes how responsive a person on different levels of sedatives or anesthetics might be. General anesthesia is the only category one that leaves a person "unarousable even with painful stimulus."

Midazolam, Stevens writes, "does not produce maximal depression of consciousness leading to general anesthesia, is not used as a general anesthetic agent, and is classified as a sedative drug." If midazolam is considered a sedative, as Jordan's petition alleges, it would not be guaranteed to ensure an inmate is "unarousable" before the other drugs in the state's three-drug combination are administered, leaving the possibility for an inmate to feel pain before death.

Other states use midazolam in their lethal injections, with mixed results. In the past year, executions in Alabama and Arkansas that raised questions about the inmate's movements included midazolam as one of the drugs in both lethal injections. In April, an inmate in Arkansas lurched forward several times in a row, about three minutes into the process, an AP reporter wrote. In Alabama, one inmate heaved and coughed for 13 minutes during his execution, AL.com reported. The most recent execution in the country, however, used midazolam with no visible complications. Ohio state officials used midazolam with rocuronium bromide and potassium chloride for their three-drug lethal injection on Ronald Phillips, whom Ohio state officials put to death on July 26, The Washington Post reported. 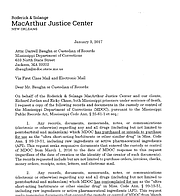 Mississippi's three-drug protocol is similar to Ohio's. In a January 2017 records request, Craig obtained drug inventory records from MDOC, which show the drugs MDOC has on hand. Mississippi, like Ohio, has midazolam and potassium chloride, these documents show. However, the second drug in Mississippi's lethal injection is vecuronium bromide, which is similar to rocuronium bromide. A 2015 study comparing the two drugs found rocuronium to have a faster onset time than vecuronium. Jordan's challenge does not address vecuronium; his petition focuses on midazolam and the state's new death penalty law.

"At a minimum, Mr. Jordan is entitled to an evidentiary hearing to prove the State's choice of lethal injection drugs violates Mississippi law," Jordan's second petition states. The state has asked for an extension of time to file their response and likely won't do so until September.