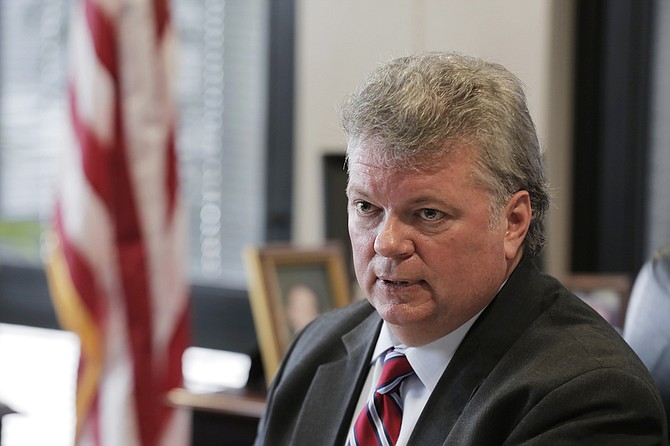 Attorney General Jim Hood settled claims with Global Tel*Link Corp. for $2.5 million, which is the second of 11 civil actions Hood filed as a result of the Christopher Epps scandal. Photo by Imani Khayyam.

JACKSON — Attorney General Jim Hood settled his office's claims against Global Tel*Link Corp. for $2.5 million today. The corporation is one of 12 that Hood has pursued legally in connection to the former Commissioner of the Mississippi Department of Corrections Christopher Epps' scandal.

Hood has pursued 11 civil actions accusing 10 individuals and 12 out-of-state corporations of using "alleged 'consultants' as conduits to pay bribes and kickbacks to then-Commissioner Epps for the awarding and retention of MDOC contracts," the press release says.

Two others involved in the Epps scandal still face charges of bribing Epps: insurance broker Guy E. "Butch" Evans and Teresa Malone, the wife of a former state representative, the Associated Press reported in May. Discussions in court indicated that six or seven other people are still under investigation.

"We will continue to aggressively pursue these remaining cases not only to disgorge these other companies and individuals of their ill-gotten profits, but also the value of the public contracts," Hood said. "Corporations who play these illegal games with Mississippi taxpayers' money should take note that the state of Mississippi will get its money back and then some."

To date, Hood's office has recovered $4,500,000 on behalf of Mississippi taxpayers related to the MDOC Prison Bribery Scandal.