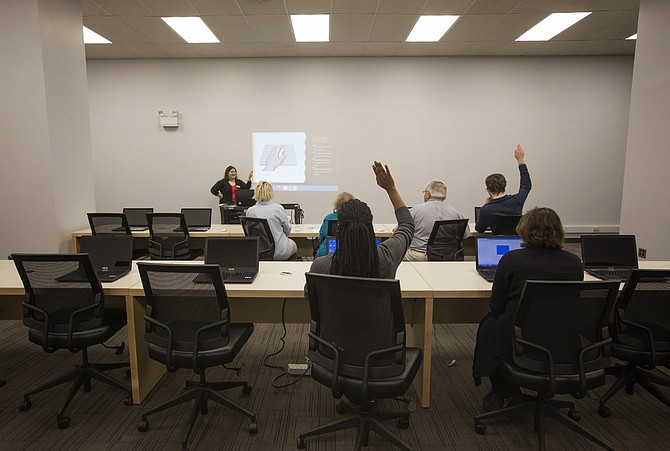 Eudora Welty Library staff members sit in the new Technology Learning Lab, which will be home to free computer and tech courses offered all year long. Photo by Imani Khayyam.

Library director Patty Furr said today that the improvements came partially from more than $500,000 in federal E-rate funds for cable equipment, which sped up Internet connectivity throughout the entire Jackson-Hinds library system. The E-rate program, also called the Schools and Libraries program, provides discounted Internet access and connections to eligible schools and libraries in the country, implemented through the Federal Communications Commission. The library also received a generous donation from the Capital Area Bar Association's Law Library Fund to fund computers. The new lab will offer free computer usage, as well as technology and social-media courses.

Furr said the new lab should help library patrons get jobs. "It's very apparent every day that they're desperate for computer training. You really can't get a job today ... if you don't know how to manipulate a computer," Furr told the Jackson Free Press. "... So we set up this lab because we believed that there was an immense need for training in computer skills and for people to be able to get jobs."

The new computers are now out on the first floor in a common area. Furr said she is not worried about noise in the new area because the fast-running computers have few issues compared to previously slow computers.

The Welty Library's Autism Resource Center, which is free and serves around 135 families, got a fresh coat of paint and is now enclosed in its own room. Previously, the resource center was in the middle of the children's library, but now families, children and adults with autism will be able to enjoy an enclosed space for lessons from interactive storytelling to life skills courses.

Free technology courses on everything from Microsoft Excel to social media will rotate, and the schedule is posted in the library as well as online. Mayor Tony Yarber, Ward 7 Councilwoman Margaret Barrett-Simon and a representative from Hinds County Supervisor Bob McGowan's office are scheduled to attend a ribbon-cutting to celebrate the new renovations this afternoon from 4 p.m. to 6 p.m.

For information about technology courses call 601-540-1999 or look online at www.jhlibrary.org. This story has been updated with a sentence to clarify what the E-rate program is.