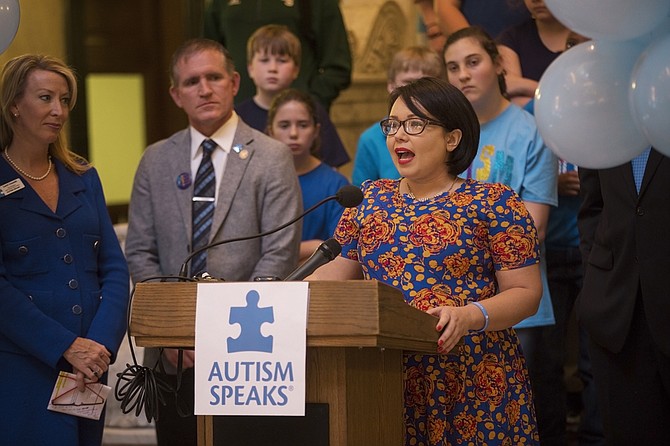 Petal native Chelsea McKinley, mother of three sons with autism, spoke at the Capitol on Monday in support of Autism Awareness Month. Photo by Imani Khayyam.

JACKSON — Chelsea McKinley knows what it's like to deal with the challenges of autism, namely accessing services and support she needs. She has three sons, all of whom have been diagnosed with various forms of nonverbal autism.

"At the time (they were diagnosed) like so many of you, the first thing I did was jump into, 'What do I do,' 'How can I help,' and I came up kind of short to be honest," McKinley told a crowd of supporters at the Capitol gathered for Autism Awareness Month.

McKinley said she tried all kinds of options to help her boys cope with—not cure—their autism, and struggled to find something that worked well until she came across Dr. James Moore's applied behavioral analysis therapy program at the University of Southern Mississippi.

The ABA therapy uses intervention and specific methods to help people learn social, communication and adaptive living skills, the Center for Autism's website states. McKinley said that her sons gained confidence through ABA therapy, and she appreciated that their gifts were highlighted—not diminished.

"I would love to see ABA offered all over the state. It's a support for (my) children, our school district and for myself," she said.

ABA is not the only treatment for autism because the disorder exists on a wide spectrum, ranging from nonverbal to highly functional and verbal. There are only 33 licensed ABA therapists statewide.

Dr. Moore, who chairs the Mississippi Autism Board, works at the University of Southern Mississippi's program that trains applied behavioral analysis to therapists. He is focusing on recruiting and teaching therapists in the master's program to stay and work in Mississippi.

The board he chairs protects the process of licensing in the state.

"The most important point to tell you is competence," Moore said at the Capitol on Wednesday.

He said unlicensed therapists could be employing dangerous practices—which state law does not permit. Moore thanked Secretary of State Delbert Hoseman who spoke at the press conference, as well as the governor and the Legislature for their support and for creating the Mississippi Autism Board back in 2015.

"Though Mississippi has made tremendous strides ... the work is just beginning. ... we have challenges remaining with access to services," he said.

In 2015 the Mississippi Legislature passed House Bill 885 that established the Mississippi Autism Board and required insurers to cover costs for autism treatment in the state. Challenges remain, however. Concerned Mississippians asked about Medicaid covering ABA therapy as well as extending the time for insurance coverage past the eight years allowed.