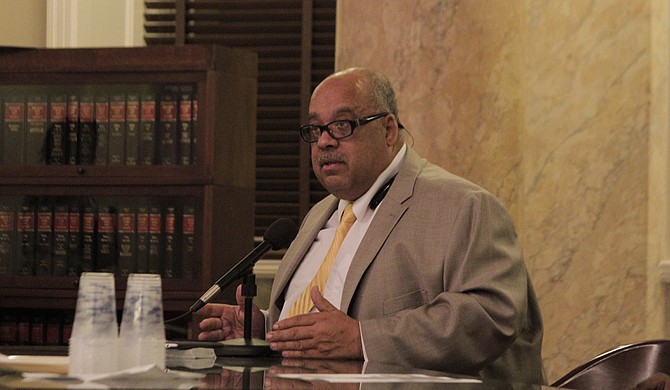 The state budget, expanding Medicaid and social-justice issues were hot topics at a town-hall meeting the Hinds County members of the Legislative Black Caucus hosted Thursday at the Mississippi Capitol. The group focused on key policy issues the caucus hopes to address in the upcoming legislative session.

Corey Wiggins, the director of the Hope Policy Institute, outlined Mississippi's tax cuts and budget as an overview for lawmakers and Jacksonians. Wiggins focused on what is at stake for working families in the State's budgeting process.

"The way our tax code is set up, lower-income people in this state of Mississippi pay a higher percentage of their income in taxes than higher-income folks," Wiggins said.

Even when the Taxpayer Pay Raise Act passed in 2016, some lawmakers pointed out that families with higher incomes benefit more from the cut. Back in March, Sen. David Blount, D-Jackson, used Department of Revenue estimates to show that a family making $30,000 annually would only get $163 back as a result of cuts to the income tax.

Republicans insisted the cuts would lead to an estimated $610 million in tax relief over a 10-year phase-in period.

"Mississippi's long-term economic health relies on a tax policy that makes our businesses more competitive in the marketplace and entices more job creators to locate here," Lt. Gov. Tate Reeves said in a press release at the close of the 2016 legislative session.

Wiggins also discussed concerns with the State's current budget, which is still not at pre-recession levels. The State's revenue bottomed out in 2011, data Wiggins used in his presentation show, and started to climb back out of the recession hole in 2012.

"When we're talking about the context of our general fund and revenue growing, that is growing out from the bottom-out trough of the recession," he said. "We still have not made it back to our pre-recession levels, and we still got a little bit to go."

The town hall also featured part of a documentary from the Mississippi Health Advocacy Program focusing on Mississippians who fall into the Medicaid gap, a problem the State caused by not expanding the program.

The film defined the gap with data. Single parents who make less than $500 a month qualify for Medicaid benefits, but a Mississippian must make $980 a month to be eligible for subsidies through the Affordable Care Act's federal health-insurance marketplace. Members of the caucus discussed the importance of expanding Medicaid for their constituents. Rep. Earle Banks, D-Jackson, said the presidential election was crucial to continuing Medicaid expansion conversations.

"This legislative session does not start on January 3—it's going to start November 8," Banks said Thursday. "If we can get our president elected—that's a Democrat, Hillary—we know we've got the (Affordable Care Act) locked in for another four years at least."

Erik Fleming, director of advocacy and policy at the ACLU of Mississippi, also spoke at the town hall. He said his organization is looking to introduce legislation that would offer state protections for civil rights, reform some policing policies (like consent-to-search and consistency in police uniform policies) and a bill that would allow lawmakers to study the racial impact of certain government systems.

Lawmakers said that in the midst of a Republican supermajority in the Legislature, the input and voices of Mississippians and their constituents are crucial to informing what policies lawmakers introduce and adopt in the upcoming session.

"It's very important to get input from you at these town hall-meetings," Sen. Hillman Frazier, D-Jackson, said.

The Legislative Black Caucus is hosting town-hall meetings throughout the state and will meet in mid-October to create a policy agenda and road map for what they would like to see done in the 2017 legislative session.