Cycling for a Cure 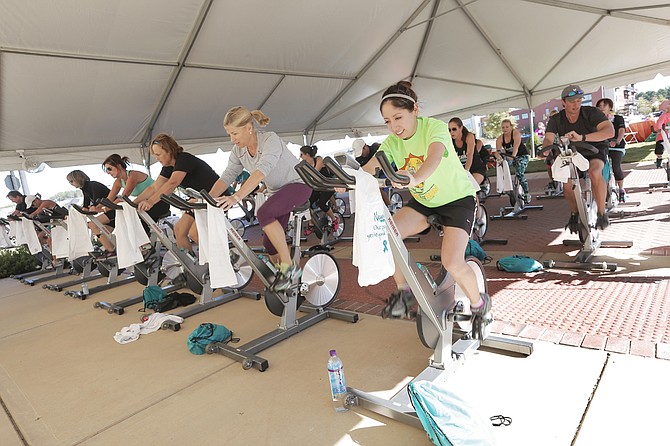 JACKSON — Lori Newcomb was diagnosed with stage III ovarian cancer in 2013. She says that while stage III is pretty far along to be diagnosed, it is not uncommon among ovarian-cancer patients because the symptoms are difficult to detect.

"A lot of times what happens with ovarian cancer is there's no early-detection tests, then you're diagnosed at a later stage, and a lot of times the outcome is not as good of a prognosis as maybe when you're diagnosed with stage one," Newcomb said. "So what we're trying to do right now is make sure we get education out into the restaurants and the community about what the symptoms are."

Symptoms of ovarian cancer can include abdominal pressure, pelvic discomfort and pain, persistence in indigestion, change in bladder or bowel habits, persistent lack of energy and lower back pain. There are no early detection tests or a cure for ovarian cancer, but Newcomb is working to change that through education in the Jackson area.

On Sept. 29, Newk's Cares and St. Dominic's hosted the third annual Ovarian Cycle Jackson event at the Club in Ridgeland. Newcomb and her husband, Chris, are co-founders of Newk's Cares; he is the CEO of Newk's eatery.

Spin cyclists paid $50 each to register for the event and raised additional money to donate to the Ovarian Cancer Research Fund Alliance, a national organization dedicated to researching tests and cures for the illness, as well as increasing educational awareness. She sits on the alliance's board and helped bring the cycle event to Jackson.

By day's end, Newcomb said she expects the event to raise more than $100,000, meaning that Newk's Cares will have raised over half a million dollars for the research-fund alliance in the past three years.

Newcomb is still going through treatment for her cancer. "Having a good quality of life and be(ing) able to survive something like this is really important, and a lot of people are battling a chronic diagnosis," she told the Jackson Free Press. "I think you take your circumstances and turn it into the best possible situation."

Before she was diagnosed, Newcomb went to spin class at 8 a.m. six days a week. Since her diagnosis she's had to slow down due to some energy loss—but she still loves to cycle. After her diagnosis, Newcomb immersed herself in research and found the OCRFA and got involved. Ovarian Cycle events happened throughout the country during September for Ovarian Cancer Awareness Month. Newcomb said she was happy for the turnout and to host the event in Jackson.

"We put our good southern spin on it," she said.