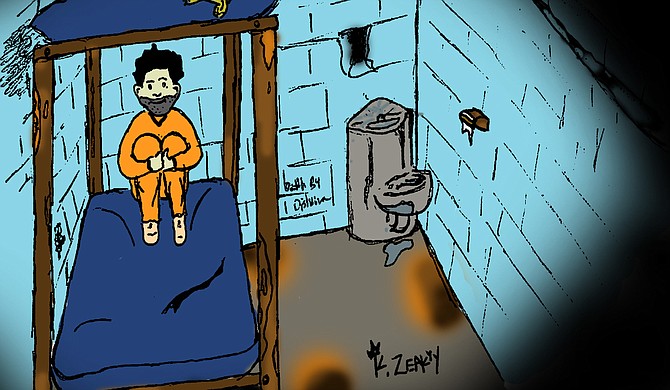 Prisoners held several staff members at the facility hostage, targeting some for beatings. Authorities blamed gangs for the uprising, but prisoners claimed all they wanted was respect, better food and amenities.

A woman whose family member was in the facility told the Jackson Free Press in 2012 that not even animals were treated the way her family member had described the conditions there to her.

Now, four years later, the Federal Bureau of Prisons has found that private prisons have higher rates of incident reports, contraband cellphone use, lockdowns and assaults in private prisons. That finding helped lead to the August announcement from the U.S. Department of Justice that the federal government will phase out contracts and eventually stop using private prisons. The announcement was significant, but not too substantial. Only 12 percent of the Federal Bureau of Prisons inmate population is housed in 13 private prisons, including the Adams County Correctional Center in Mississippi, which the new mandate will affect.

"[Private prisons] simply do not provide the same level of correctional services, programs and resources; they do not save substantially on costs; and as noted in a recent report by the Department's Office of Inspector General, they do not maintain the same level of safety and security," U.S. Deputy Attorney General Sally Yates wrote in an Aug. 18 letter to the acting director of the Federal Bureau of Prisons.

The report comparing private and public prisons found that the latter have higher incidents of positive drug tests and sexual misconduct, however.

The Management and Training Corporation disagreed with the DOJ's findings.

"If the DOJ's decision to end the use of contract prisons were based solely on declining inmate populations, there may be some justification, but to base this decision on cost, safety and security, and programming is wrong. The facts don't support the allegations as demonstrated below," the corporation's formal response on its website states.

CCA did not respond to requests for comment by press time.

Even before the U.S. Department of Justice's announcement, Mississippi's private prison population was set to shrink. One of four private prisons in the state, the Walnut Grove Correctional Facility in Leake County, will close by the end of September.

Walnut Grove and the East Mississippi Correctional Facility are both subjects of class-action lawsuits brought against the Mississippi Department of Corrections for alleged safety and security issues that have negatively affected inmates.

MDOC Commissioner Marshall Fisher told lawmakers in late August that most inmates housed at MTC's East Mississippi Correctional Facility in Meridian have mental-health issues. The ACLU's National Prison Project and the Southern Poverty Law Center filed a lawsuit in May 2013 that alleges "barbaric and horrific conditions" there, including mice and rats in prison cells and violence among prisoners. MDOC has denied these allegations, and the case is still in the discovery phase.

Fisher did not address the lawsuit specifically with lawmakers but did say that inmate mental health is "a serious problem" for his department. He estimated that around 17 percent of inmates in the State's custody suffer from a mental illness. He said this is a problem for those who receive medical care when they're in the facility, but then get off their medications after they are discharged.

"So they're getting out, and let's say a person is bi-polar, and they hit the streets without their meds, and 30 days later, they can't help it—they're going to be right back in the system," the MDOC commissioner told lawmakers in August.

Walnut Grove had housed minors who were tried as adults for years until another SPLC lawsuit led to a settlement agreement to remove them from the facility.

Bureau of Prisons data show that private facilities are cheaper to operate and save taxpayer dollars. This data, however, refers to private prisons' lower per diem rates, which is not the same as evidence that private prisons save money, a Fordham law journal article explains.

In Mississippi, private prisons technically do cost less per day per prisoner.

Critics of private prisons say they are able to offer cheaper services to states and the Bureau of Prisons alike, because they're bottom-line driven. Blake Feldman, advocacy coordinator at the ACLU of Mississippi, says private prisons save money because they provide as little as possible to inmates.

"When one of these three private-prison corporations comes in and says they'll do it for cheaper, they're cutting corners that just cannot be cut," Feldman said.

Cutting back on costs can lead to problems with inmate safety and health like the higher rates of assault and contraband cellphone use in private prisons, as the BOP report found.

Feldman said, ideally, the state-run system would focus on rehabilitation and preparation for re-entry, but corporations ultimately must please their shareholders.

To fund the state's private prisons, the Mississippi Legislature enacted the Correctional Facilities Emergency Construction Fund in 1994 to authorize the building of private prisons in the state to deal with overcrowding issues. State law says that contracts for the construction, purchase or lease of a facility were not to exceed 20 years.

Senate President Pro Tempore Terry Burton, R-Newton, who has been in the Legislature since 1992, asked about the state's debt for private prisons.

"(Back in 1994,) we had to do something; there was no choice," Burton said at the work-group meeting in late August. "We decided to do the private prisons, bonded them over 20 years, paid them off, and then they become state property. ... How many of these bonds have we paid off?"

"We still have a debt service," Fisher responded.

In fact, MDOC will not finish paying off bonds on the state's private facilities until 2028. Mississippi's four private prisons—including Walnut Grove—will cost the state $328.4 million by the time the state pays off those bonds.

Despite its closure, MDOC will continue to put up bond payments for Walnut Grove; it will end up being the most expensive private prison in the state, costing $153.9 million once the bond is completely paid off.

Not a Dime More

Sen. Sean Tindell, R-Gulfport, asked Commissioner Fisher at the Aug. 23 working-group meeting about how much money the state saves by using private prisons.

"Have you done any sort of breakdown on recidivism rates in private prisons, as far as how many of them (prisoners) are coming back there, compared to ones coming back to state-run facilities?" Tindell asked Fisher.

Fisher did not have the breakdown in recidivism rates between public and private prisons, but the state's total recidivism rate is around 31 percent, he said.

About 18 percent of Mississippi prisoners are housed in private prisons, and that number will drop lower with the closure of Walnut Grove, which MDOC said had to close due to the state's decreasing prison population and tight budget.

"MDOC's budget is lower than what we anticipated," Fisher said in a June press release when he made the announcement. "Pursuant to an intensive budget review and evaluation, we have determined this is the most prudent action. We have the space in our state-run prisons to house the 900 inmates at Walnut Grove."

Mississippi had the fifth-highest rate of incarceration in the country, based on 2014 Bureau of Justice statistics. But in that same year, lawmakers also passed House Bill 585, which dramatically changed the landscape for criminal justice in the state by allowing corrections resources to be used to help redirect prisoners to drug- and alcohol-treatment programs.

"The more our population drops, we do have to consider lowering the amount of money that we're spending on corrections," Fisher told lawmakers last month. "But I think at the same time, we have to realize that just because we put someone on parole, there's still a cost fixed to that."

Fisher told lawmakers that his department is working to increase the number of re-entry and rehabilitation programs, including partnerships with the Mississippi Department of Mental Health.

The commissioner mentioned Hattiesburg's mental-health court, and recommended an increase in those programs.

And as for budget concerns? "We're not asking for a dime more," Fisher said.

Clarification: This story has been updated to reflect more recent research on private vs. public prison costs that show the difference between per diem rates and total cost, as published in the Fordham Urban Law Journal.