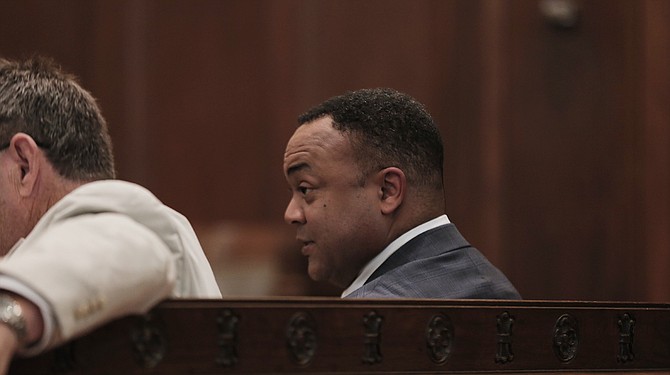 “Stay tuned,” Smith told television cameras and the public in response to the information contained within the documents.

Roberts held a hearing the afternoon of Monday, Sept. 12, to decide the merit of the several motions The Clarion-Ledger filed to unseal documents related to the charges against Smith. The judge determined that his authority, handed to him from the Mississippi Supreme Court, allowed him to also rule on the sealing of other related cases, including the mysterious No. 16-120.

In the end, seven total files are set to be released to the public, pending the judge’s signature on the actual order to unseal, which The Clarion-Ledger’s attorneys had still yet to pen by press time. The Jackson Free Press will obtain and publish copies as they are released at jfp.ms/documents.

After the parties confirmed to Roberts no more indictments were pending, the judge moved forward to unseal the documents. However, discussion over the administrative files of the court, the file known as 14-9006 or just Judge Jeff Weill’s administrative file, led attorney Dennis Horn, representing The Clarion-Ledger, to call Hinds County Circuit Court Clerk Zach Wallace to the stand.

Wallace, under oath, stated that he sealed the administrative order under his ability to as the clerk so that attorneys could not file through the online court filing system, known as Mississippi Electronic Courts. He said that each judge had his or her own administrative court file, for convenience, into which all documentation not assigned to a specific case file is placed.

The circuit clerk said that if the public wished to see what was in those administrative files that they could request to view them through his office. The Jackson Free Press, however, asked Wallace to see that administrative file earlier this summer, and he declined to permit access to it.

Roberts also set the hearings for the case, including an Oct. 25 hearing for all motions currently pending and a tentative date of Dec. 19 for a trial.

Read more about the DA saga at jfp.ms/DAFiles. Email city reporter Tim Summers Jr. at [email protected] and follow him @tims_alive on Twitter for breaking news.