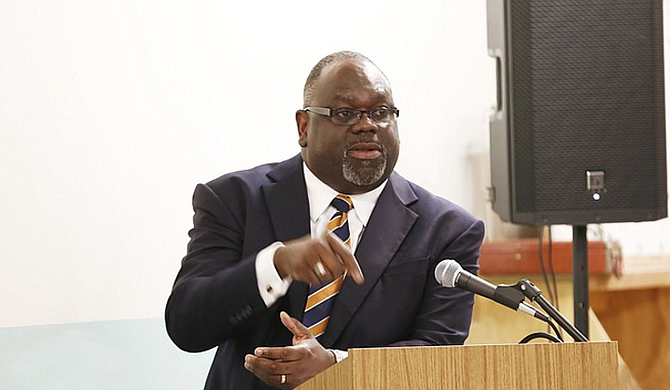 U.S. District Judge Carleton Reeves struck down Carlos Moore's lawsuit against the Mississippi flag, while leaving the door open for another lawsuit against what he called “a symbol borne of the South’s intention to maintain slavery can unite Mississippians in the 21st century.” File photo by Imani Khayyam

Moore alleged that the Confederate battle emblem in the canton of the Mississippi state flag violates the 13th and 14th Amendments. He brought his federal lawsuit against Gov. Phil Bryant, who has the authority to ensure that state laws are followed.

Reeves did not find Moore to have standing in his case. Moore had to prove that the injury he had suffered (seeing the state flag over courthouses where he practices law) had a causal connection to Gov. Bryant and the state of Mississippi displaying the Confederate emblem.

In his opinion, Reeves writes that fear of imminent violence—such as incidents like the shootings in Charleston, S.C., last year—“falls short of Constitutional standing.”

While Moore’s case was dismissed, Reeves did not close the door on any potential lawsuits brought against the state’s flag in the future.

“The Confederate battle emblem has no place in shaping a New Mississippi, and is better left retired to history,” Reeves wrote in his opinion.

“For that change to happen through the judiciary, however, the Confederate battle emblem must have caused a cognizable legal injury. In this case no such injury has been articulated. Whether that could be shown in a future case, or whether ‘the people themselves’ will act to change the state flag, remains to be seen.”

Judge Reeves did not hold back in his opinion, expressing what Moore and several other Mississippians in the state and those who live out of state have expressed through ballot initiatives and petitions.

“To millions of people, particularly African-Americans, the Confederate battle emblem is a symbol of the Old Mississippi—the Mississippi of slavery, lynchings, pain, and white supremacy,” Reeves writes. “As Justice Fred Banks noted, the Confederate battle emblem ‘takes no back seat to the Nazi Swastika’ in its ability to provoke a visceral reaction. The emblem offends more than just African-Americans. Mississippians of all creeds and colors regard it as ‘one of the most repulsive symbols of the past.’”

Reeves continued that it is difficult to imagine how “a symbol borne of the South’s intention to maintain slavery can unite Mississippians in the 21st century.”

For more about the fight to bring down the Mississippi state flag visit jacksonfreepress.com/slavery.