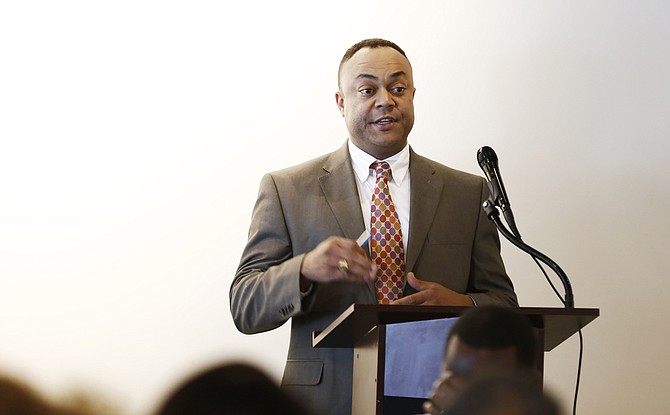 Taped conversations of Hinds County District Attorney Robert Shuler Smith depict that the Mississippi Bureau of Narcotics’ raid on a home fueled his feud with the attorney general’s office. Photo by Imani Khayyam.

JACKSON — It is something out of a noir movie: wired confidants, explicit language and talk of conspiracies.

In a strange turn, Smith's attorney, Jim Waide, filed the transcripts with a motion to keep the conversations, specifically Smith's use of racial slurs and profanity, out of the upcoming December trial, arguing that there is no relevance to the charges before the court.

Ultimately, a judge will decide whether the conversations have merit as to the guilt or innocence of the accused, but for the reader attempting to gain some perspective about the cases, the transcripts paint some of what may or may not be, as Smith describes it, "a big-ass false fantasy."

Smith places Christopher Butler, who at the time of the recording was in the Hinds County Detention Center in Raymond, at the center of the struggle between the Hinds County district attorney's office and the attorney general, even referring to Butler as a "political prisoner."

The district attorney also mentions an incident, estimated through context clues to be during the early hours of June 12, when an unknown party went through the contents of Butler's jail cell.

"But somebody came to his cell," Smith tells Johnson, who was wearing a wire at the behest of the attorney general during the conversation. "I think he said around—of course it was a Saturday night, but that would be Sunday morning around 2:30 in the morning, and they said face the wall. He was like, oh, lord, what the hell? Faced the wall. And they went into his cell and started grabbing his paperwork and sh*t trying to ..."

Smith said that after Butler's family contacted him, he visited Sheriff Victor Mason and representatives from the attorney general's office at the jail.

"Well, when (Butler's) family comes to me, I go over to the sheriff's department, and they (are) all huddled up in there in Victor's office. And then they come out with different excuses; he (is) on lockdown," Smith said.

The DA added that he asked for all the visitation records, vowing to subpoena whoever searched his cell.

"So I'm going to find out who that is, and I don't give a fck who it is," Smith told the FBI and attorney general's informant. "It could be (the) motherfcking fed with intimidating a witness as well so ..." The transcript trails off.

In a separate track from the June 18 recording, Johnson cuts to the chase with Smith about the attorney general's focus on Butler, asking him, "What's their beef with Butler?"

"It ain't got nothing to do with Christopher (Butler)," Smith replies. "It's the fact that they got caught on tape."

The tape in question, the DVR recordings from Butler's home found after the Mississippi Bureau of Narcotics raided it in 2011, forms the foundation of Smith's assertions that Butler was set up, although it has never been clear in the documents exactly how. Documents from Smith's attempt to dismiss the drug charges stemming from the 2011 raid describe the search of the house in a general way, but to Smith told Johnson there was much more to it.

"So my goal is by the time they understand the case," Smith said of the grand jury, "they're going to be like, and you mean (Hinds County Circuit Judge Jeff Weill) denied your motion to dismiss this case?" He expands his description of the video later on.

The video, Smith has maintained, contains evidence the agency planted evidence. The agency has repeatedly denied the allegations. Smith states in the recording that it holds damning evidence, including allegations of shooting animals and leaving parts out of their reports.

"Oh sht, how could I forget the main video? Video of plant, then, yeah that's right, shooting dogs and sht. They left that out of the report," Smith said, referring to the MBN officers that filed a report of the incident.

Later on in their conversation, Smith says he thinks the attorney general focused on Christopher Butler because of his association with the district attorney.

"So it's just they're picking on people they think are closely associated with you—?" Johnson asked Smith.

"Well," Johnson said, while already wearing a wire, "I know it's going to come one day when they start picking on me."

Email city reporter Tim Summers Jr. at [email protected]. Read more about the indictments of the district attorney at jfp.ms/DAFiles.