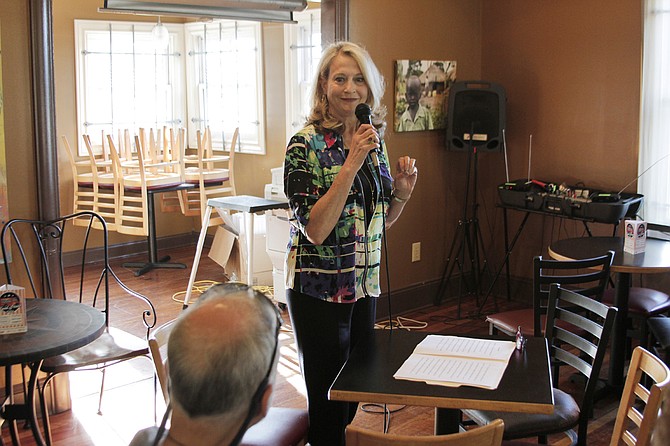 JACKSON — The Jackson City Council moved funding back to the Greater Jackson Arts Council on Oct. 4, but it was not up to the level of last year—nor did it come quickly enough to restore the organization's confidence in its relationship with the City administration.

Meantime, City officials respond that other vital programs took cuts just as deep, if not much deeper than the arts group.

The city council, exercising its powers as the legislative branch of municipal government, moved the funding for half the salary of the director of the Department of Public Works from the general fund to the water/sewer revenue fund, freeing up $80,000 to restore to the GJAC's budget.

That is $60,000 less than the amount the City of Jackson allotted for the organization last year. Its total budget is $441,000, and GJAC has four full-time and three part-time employees with $160,000 in total compensation listed on its 2013 tax return. GJAC Executive Director Janet Scott did not respond to a request for more recent salary and other budget figures by press time.

Scott praised the council's efforts council to put money back into the program in an Oct. 5 interview.

"This council does a huge service to this city, and everything we do makes the council and the administration look good," Scott said. "Not only that, we also put a lot of money back into the community in our grants program, and we have managed this building for them for six years with zero financial help from the City."

Jon Salem, assistant director of the GJAC, recently told the Jackson Free Press that the organization distributed over $136,000 over the last year to more than 187 different recipients, which vary from individuals to groups, including festivals and events.

Scott referenced a 2012 study about the economic impact of arts organizations—including the GJAC—across Jackson. The 2012 study, "Arts and Economic Prosperity IV: The Economic Impact of Nonprofit Arts and Culture Organizations and Their Audiences in Greater Jackson Area," summarizes certain economic indicators that correlate with the investment Jackson's arts organizations, including but not limited to the GJAC, bring into local arts.

Arts and Economic Prosperity IV: The Economic Impact of Nonprofit Arts and Culture Organizations and Their Audiences in Greater Jackson Area 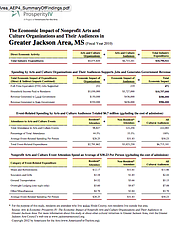 Americans for the Arts, a nonprofit "for advancing the arts and arts education," put the study on national arts impact together with information from local member organizations like the GJAC.

For the 2010 fiscal year, seven of the 19 "total eligible nonprofit arts organizations" in the Jackson area put about $4 million into the local economy, including 252 full-time jobs, with around $150,000 in revenue from those expenditures ending up in local government coffers.

GJAC has used that money to maintain the Arts Center of Mississippi, a building the City owns. Previously, it was the site of the Mississippi Museum of Art before it moved into a new nearby facility.

"And we've put almost a quarter of a million dollars of our money, and that includes renovations, salaries, exhibits, everything, in those six years to keep this building going, so that there was ... an alternative for people to rent and people to utilize that's economically viable," Scott said.

Arts and culture audiences spent a total of $6,715,101 at events, the study found, equating the impact to 219 full-time jobs and $436,000 in tax revenue to local government entities. An estimated 200,000 participants attended arts and cultural events in the city; more than 55 percent of them traveled from outside Hinds County.

"We've done that, and the fact that we've done that and that they have a list of every single penny, where it goes, who it goes to, and what it's for, and they turn around and zero us out," Scott said of the City administration, adding that the reduction was a "statement," and not a good one.

"It shows that arts and what arts can do, especially for the children of this city—they showed that is not a priority," Scott said.

Michael Raff, the director of the Arts Center and deputy director of the City's Department Human and Cultural Services, said the decision was not over how the administration feels about the GJAC.

"As far as the funding goes, frankly, we didn't have the money," Raff said. "We were cut over a million dollars in the department. That meant closing the child-care center, closing the senior center, losing our homeless coordinator, losing our Fresh Start Center, the re-entry program," Raff said. "We lost 12 (employees) altogether, and we lost six over here in Cultural, which I am over."

"So that's the situation; there was not money in our budget to fund that," Raff said. "Now, what happened at city council is that the money to fund (GJAC) did not come out of our budget, and we were delighted to see that there was some source of funding. They are very important to our operation."

Raff said his department took significant hits to its own personnel roster before it considered the cuts to GJAC.

"We lost employees. We lost three vacancies, spots, at the planetarium. We lost one at Smith (Robertson Museum and Cultural Center). We lost two at the (Jackson Municipal Arts Gallery). Right now we only have the manager at the to run the whole gallery by himself," Raff said.

"We are hurting. People don't realize this, but we took a big hit ourselves before we cut anyone off."