Saluting Those Who Serve on Veterans Day 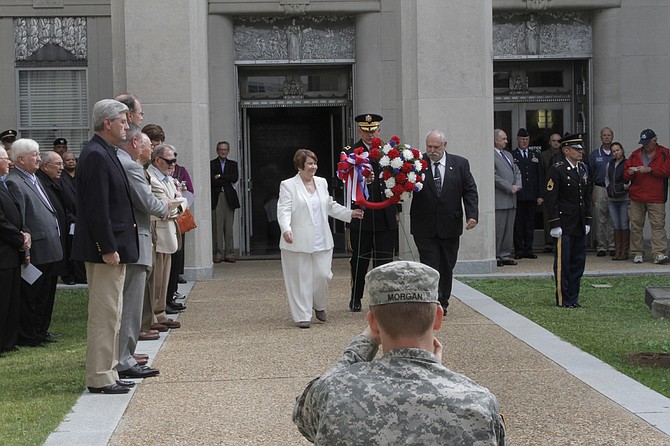 Gold Star parents Leonard and Sandra Scardino lay the wreath in honor of their son who died in service, as Gov. Phil Bryant and other leaders look on. Photo by Arielle Dreher.

JACKSON — Veterans, their family members, men and women in the military, and state leaders gathered at the Mississippi War Memorial Building today to honor the veterans from Mississippi and the country who have served their country.

Gov. Phil Bryant, whose father was a World War II veteran, addressed veterans and family members of those who have served in the military, assuring them that the next generation of military men and women are the best of the best. Bryant visited Mississippians serving in Afghanistan back in March, he said on Nov. 11.

"Out in the middle of the Afghan desert, there were our men and women proudly serving our nation," Bryant said. "They continue to understand that freedom's price can be difficult to pay, but we have these freedoms that we enjoy and take for granted because they are there today."

Bryant said that despite the election results on Tuesday, the U.S. military is independent.

"Their dedication to this country, not to a person, but to this nation and to its standard, we can rest upon no matter who was going to win that election," Bryant said. "The U.S. military are going to be there for this nation; it is within the fabric of all Americans to fight when called upon and to pray for peace."

Recently appointed adjutant general of the Mississippi National Guard Janson Boyles said Veteran's Day is important because the less than 3 million people who serve the country's 300 million Americans deserve celebration. Boyles, who joined the National Guard in 1982, served in Afghanistan and says he learned from Vietnam veterans, many of whom are leaders in the military today.

Boyles said the U.S. military is probably as important today as it has been in a long time due to challenges overseas, including threats from Russia and in the Middle East.

"You've got the Russian threat on our right doorstep and threats in the Middle East over territory and nuclear arms," Boyles said. "We have quite a bit out there that we haven't been able to corral (yet)."

Boyles said that while there are several threats, he is confident that "we will be ready."

"We thought we had figured out the terrorism piece that continues to remain a challenge," Boyles said. "We will defeat them, but it just takes longer."