Gov. Phil Bryant: Unite Behind Trump 'in Civility and in Trust' 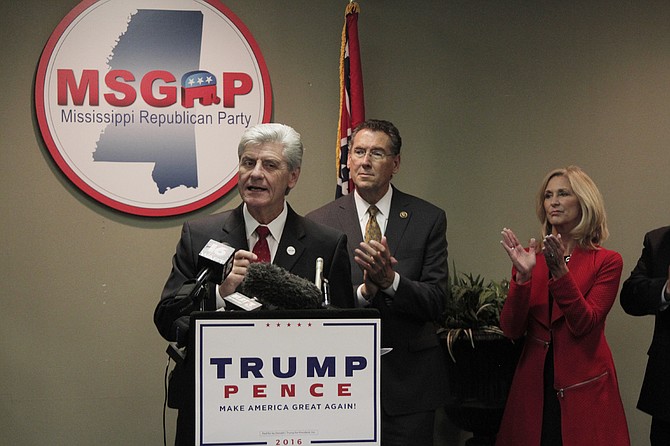 Gov. Phil Bryant is calling on Mississippians to come together "united in civility and trust" after Donald Trump won the 2016 presidential election. Photo by Arielle Dreher.

JACKSON — Leaders from the Mississippi Republican Party called on the state's citizens to unite as Donald Trump won enough states Tuesday night to be the next president of the United States, even though Democrat Hillary Clinton led in the nationwide popular vote.

State Treasurer Lynn Fitch, the chairwoman of Mississippi for Trump, said it is an exciting time for the American people.

"We have great opportunities ahead of us to bring in conservative values and principles and jumpstart the economy with new ideas and new processes and new thoughts and certainly to protect our freedoms to protect our Constitution and to bring security to a very, very troubled world," she said at a Nov. 9 press conference.

Trump won 58 percent of the vote for president in Mississippi; Hillary Clinton received 40 percent of the state's vote. Gov. Phil Bryant campaigned around the country for Trump, including a trip to Pennsylvania with Gov. Rick Perry and Gov. Mike Huckabee, all Republicans.

"There are many joys that we can cherish from last night's victory, and it would be all too easy to feel vindicated and boastful, but President-elect Trump has called on us to be a people united," Bryant said today.

"As governor of this great state, I will heed those words and ask all Mississippians to come together as one today, as citizens of this nation, we must be united in civility and in trust. We must be united in accepting the results of this historic election and its true potential. This is our opportunity to join the next president in making America great again."

Bryant said Trump knows Mississippi and has said that the state will have the ability to "go directly into the oval office with the concerns we have." Bryant compared Trump to Mississippi, saying both are often misunderstood.

"Mississippi, like Donald Trump, has often been misunderstood and seen only for our imperfections," he said. "Today begins a new defining for this president-elect and for our Mississippi; let us go together."

Gov. Bryant said he was not "applying for" a spot in Trump's administration, and said that while he would be willing to take a position if asked, he also said "it's something that just won't happen."

"I just can't say just now (whether I'd consider it) because I've been called by a governor (in the past) and asked to take an appointment, and governors and presidents are hard to say no to, and I would say that this one would be particularly hard to say no to," he said.

Election results show that while Trump won the election with enough states to put him over the electoral-college target of 270, Clinton won the popular vote nationwide. Last night, protests erupted around the nation against the new president-elect over campaign pledges, statements and tweets many consider to be bigoted, and harmful to both women and people of color.

Many protesters are calling for the electoral college, which does not vote until December, to cast their votes for Clinton instead.

Bryant, however, called on Mississippians to come together to support Trump.

"I ask all Mississippians who are rejoicing or brooding today to lay down your pride or your disappointment and come together; we have this ordained opportunity to be a part of this administration for the benefit of our state and our nation and our people," Bryant said.

All of Mississippi's U.S. representatives were re-elected, including Rep. Gregg Harper a Republican who will enter his fifth term representing the middle portion of the state, District 3, which includes parts of Jackson, as well as parts of Madison and Rankin counties. Harper told reporters he believes U.S. House Speaker Paul Ryan will keep his role and that he is excited to serve under Trump.

After the tape went public of Trump bragging to a now-former NBC host about assaulting women and grabbing their vaginas, Ryan had backed away from openly supporting Trump until just before the election.