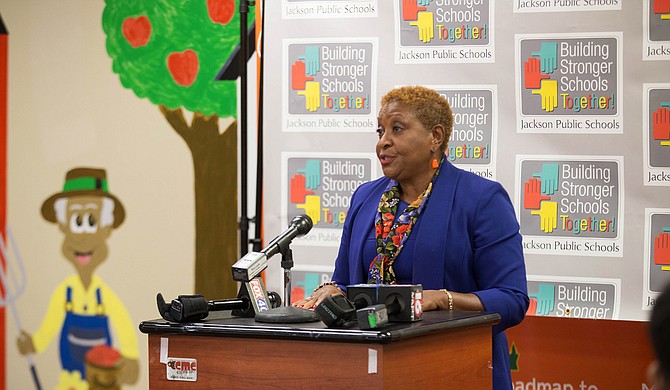 Beneta Burt, the president of the Jackson Public Schools Board of Trustees, announced that Dr. Freddrick Murray, the chief academic officer of the JPS high school division, will serve as the interim superintendent of the district. Photo by Imani Khayyam.

Dr. Cedrick Gray formally submitted his letter of resignation Tuesday, Nov. 1, which was effective immediately. After two consecutive executive sessions, the Jackson Public Schools Board of Trustees announced that Dr. Freddrick Murray has agreed to serve as interim superintendent.

Murray is the chief academic officer in JPS' high-school division. The board will immediately get together to form a search committee to look for Gray's replacement, as well as sit down with Dr. Murray to think about the "other systemic things plaguing the district," President Beneta Burt said at the meeting.

"Dr. Murray knows the system and knows the system well. He has served as a principal in all three different levels in Jackson, and he has a great camaraderie," Burt told reporters after the board came out of executive session.

She did not disclose details about Gray's severance package, saying it was a "personnel issue." She said the board had not decided or discussed any details about the search committee in terms of who would be on it or how large it would be.

"We have so many things going on at this point, so we will do with all deliberate speed; just tonight, we talked about quickly reconvening and doing what we need to do, " Burt told reporters.

Burt told reporters and a few parents that the process for forming a search committee would be transparent, and she vocalized support for parents' concerns that they should sit on the search committee.

JPS is in the midst of an audit from the Mississippi Department of Education, and Burt said the district has submitted 19 items that need to be corrected to MDE and that they are waiting for the department to get back to them. JPS is also reeling from its "F" grade in the state's accountability rankings released in October.

"In terms of priorities, that is first on our list because we need to understand that in order to be able to put in some strategies to try to work with that," Burt told reporters.