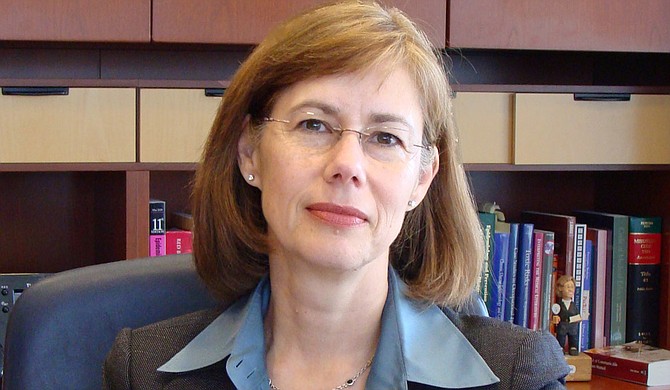 Most social-service state agencies, including the state's health, mental-health and human-services departments, will have to make layoffs and cut programs in fiscal-year 2017 if Gov. Phil Bryant signs the budget bills the Legislature passed in April. The governor has already cut fiscal-year 2016 budgets due to revenue shortages.

"Last year, the Legislature gave us some funds to work on the infant-mortality issue, but we won't be doing those things that we have done in the past because we won't have the funds to do them," state health officer Mary Currier said last week. "And we were trying to do very evidence-based things that can have a real effect on infant mortality."

"We were providing education to every woman who gives birth in a hospital so that they understand how their baby can be safer from the risks of SIDS (Sudden Infant Death Syndrome) so we won't have the funds to do that anymore," Currier said. "We have the highest infant-mortality rate in the country, so this is an area where we really need to concentrate, but we wont have the funds to do that."

Most of the state's social-service agencies are looking at harsh cuts—with the exception of the state's foster-care system, which received surplus funding in order to comply with a federal court order. The Mississippi Department of Health is looking at a $3.8 million, or 11-percent budget cut, for fiscal-year 2017, and Currier says this cut will affect most part of the agency—except the health clinics, which suffered from earlier cuts this year—and result in more than 127 jobs lost in the department.

The Department of Mental Health is looking at a 4.4 percent or $8.3-million cut that will mean "a reduction in force and a reduction in services," a Tuesday press release from the department said. "Because of the reduced funding appropriated for FY17, DMH must close some services. DMH's goal is to minimize the number of layoffs by offering positions currently on recruitment to staff who work in the programs affected by these cuts. The closure of services and supports will impact local communities throughout the entire state," Communications Director Adam Moore wrote.

About 62 percent of the Department of Human Services' state general-fund budget went to the foster-care system, which will become the new Department of Child Protection Services, leaving the rest of the department to deal with quite a budget shortfall. The department did not want to offer comment for this story.

Currier's department has already struggled with budget issues earlier this year due to the falling number of Medicaid patients the department sees, resulting in a loss of close to $10 million in Medicaid reimbursements and nine health clinics closing. The clinic closures, in places like Newton, Taylorsville, Biloxi and Ocean Springs, meant 64 clinical staff members lost their jobs in January, and Currier says her department left an additional 89 positions vacant in fiscal-year 2016 because they didn't have the funding.

"We're still seeing the patients; what we've done is decrease our footprint to where we can still take care of the patients who are coming to see us so we're just doing that more efficiently than we did in the past," Currier said. "So it was a gradual decline (in Medicaid reimbursements), but we dealt with it by sending people home in a non-gradual manner."

In preparation for July's forthcoming cuts, Currier told the Jackson Free Press that she is working hard to not cut any more clinical staff with the new budget cut and spread the $3.8 million across the rest of the agency.

State agency heads have voiced concerns over another budget process bill that will jeopardize millions of dollars in federal funding, preliminary analyses from the state attorney general show.

The Mississippi Budget Transparency and Simplification Act of 2016 would prohibit state agencies from charging another agency a fee, assessment, rent or other charge for resources or services. Attorney General Jim Hood wrote a letter to the appropriations committee chairmen, the legislative leadership and the governor expressing concern with the bill in early March. 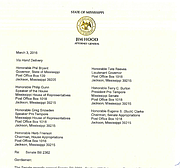 "A major problem with this proposed legislation is the loss of federal money," Hood wrote. "When a state agency pays the Attorney General's Office for legal fees/services, the federal government reimburses that state agency at a rate of 66-100%, depending on the match rate for various programs. If the expenditure of legal fees/services is not incurred and no payment is made, then the agency cannot claim the reimbursement from the federal government." 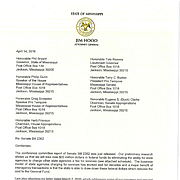 On Friday, Gov. Bryant signed the bill into law, the Legislature's website shows. Hood wrote a second letter to the same recipients about the bill after it came out of conference in April and said preliminary research by his department estimates a loss of more than $20 million in federal revenue for state agencies, including all the state's social-service agencies.

Currier says the bill would jeopardize cooperation among agencies to provide basic services—such as disaster response. Currier used the 2014 Louisville tornado as an example of such cooperation that required agency reimbursements.

The Mississippi Emergency Management Agency is a small group of people that relies on the response of other state agencies to provide disaster relief. The Department of Health provided evacuation assistance, a portable hospital and staffing as well as rebuilding plans in Louisville after the storm. Currier said it cost $1.3 million, which the department was reimbursed by MEMA drawing down federal funds to do so. With Senate Bill 2362 as its written, this would not be possible. And without that payment, the health department could not show up because, as Currier says, "We have to make payroll."

The state's health officer said it was her understanding that the legislative leadership is working on this provision because they have communicated to her that things like disaster relief and emergency response are important.

On Monday, the health department said Dr. Currier is expecting a written response from the governor's office regarding the matter. "We are hopeful that some of our issues will be resolved in the coming weeks," the department's communications director, Liz Sharlot, said in a statement.

The governor's office did not respond to requests for comment, but Laura Hipp, communications director for Lt. Gov. Tate Reeves, said via email: "Legislative leadership and staff, the Governor's office, and Agency directors are working together to develop a plan to implement the SB2362. While it will take effort to change the status quo, the Lieutenant Governor believes bringing more transparency and more scrutiny to spending of taxpayer dollars is well worth the work."

"It's a shame because I think in a state like Mississippi where we don't have excess money to just throw around, we should all be working together towards common goals, and this makes it more difficult," Currier said.