Battle for the Airport: The Next Steps | Jackson Free Press | Jackson, MS

Battle for the Airport: The Next Steps 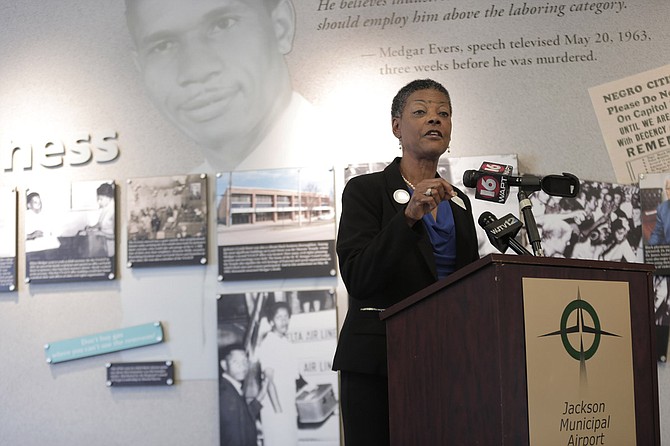 Dr. Rosie L.T. Pridgen wants Mississippians to know that the JMAA will fight for the airport. Photo by Imani Khayyam.

JACKSON — Medgar Wiley Evers looked down from the wall of the memorial pavilion in the airport named after him upon the chairwoman of the soon-to-be-replaced governing commission as she lamented the governor's signing of SB 2162 into law.

"It is a sad day in Mississippi when a city that owns its airports is stripped of its ownership by those that do not own it, and seek to justify its power-grabbing reach by claiming we are here together," Dr. Rosie L.T. Pridgen, who chairs the Jackson Municipal Airport Authority, said during a May 5 press conference at the facility.

"Some of the most negative impact this could have is, number one, it says to our children and other citizens that you can own something, you can follow the rules and so forth, but if someone decides that they may choose to change it (they can) without real logic, without making any business sense," Pridgen said. "That's a message we don't really want to be teaching."

"Ownership of the airports belongs to Jackson. Its citizens should not be disenfranchised by someone else arbitrarily deciding these are the things that we want to happen, we want to take your property, rearrange it and tell you in essence how you should operate," Pridgen said.

JMAA is preparing a legal battle, but not rushing into a lawsuit, she said, choosing instead to see what the Federal Aviation Administration has to say about the "takeover" effort. "What we are saying to our citizens is that we are not going down that road yet," Pridgen said. "We are petitioning FAA. We really do believe that the decisions to really change all of this still have the opportunity to be put back on the right track. So that's where we are going with all of that."

The JMAA is circulating a petition for the FAA that can be found on its website in an effort to convince the FAA to keep the license with the City.

The Mayor and City of Jackson representatives do not have the same attitude. They are ready to litigate.

"The City of Jackson maintains its position that this unconscionable legislation hijacks the City's authority to operate its municipal airports," Mayor Tony Yarber said in a release on May 4.

"Gov. Phil Bryant's signing of the bill shows he has sided with the cell of lawmakers and entrepreneurs commissioned to commandeer the City's municipal airports," Yarber said. "We will not yield to the legislation, but will challenge its constitutionality. Senate Bill 2162 is unconstitutional and not supported by either state or federal law."

Council President Melvin Priester Jr. said that the Council and the City are ready for the legal battle, but he could not comment on particulars.

"I expect this to be litigated furiously," Priester said. "I can't tell you the precise timeline because we are still setting up our legal strategy on that front."

"The city attorney's office is working very hard on this, and because this is going to wind up in litigation, I really can't say much," he said.

'This now goes to administrative law courts, and I am confident that the FAA and the courts will do exactly what they did with respect with Charlotte." State officials in North Carolina tried a similar "takeover" effort in Charlotte in 2013, which is still tied up in court.

"And the end result will be after much legal wrangling the City of Jackson will continue to have the airport operated by the Jackson Municipal Airport Authority," he added.

Pridgen and the JMAA Board, for the moment, will continue to collect signatures for their petition. And the rest of Mississippi will await the upcoming legal battle.