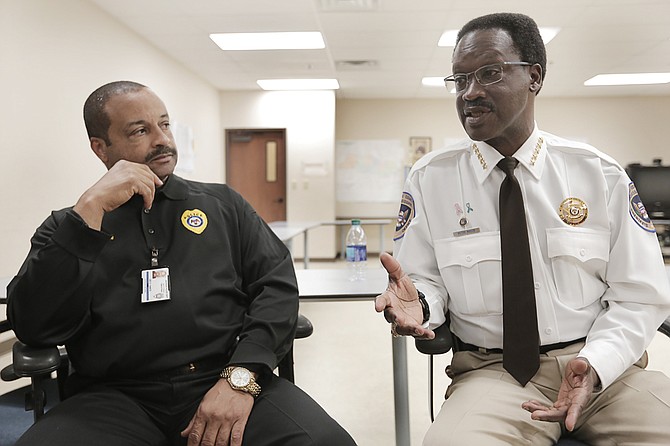 Jackson Police Chief Lee Vance and Sheriff Victor Mason have joined forces to create a new operation to attack crime and quality-of-life issues in the City. Photo by Imani Khayyam.

JACKSON — It takes more than policing to "cut down on crime" and create safer neighborhoods. It takes a village, quite literally. Community engagement is crucial to keeping neighborhoods and cities safe. One of the easiest ways to stay engaged with policing, beyond watching the nightly news and lamenting how unsafe the streets are, is to hold law-enforcement officials accountable, and help them.

In 2015, as Donna Ladd details in Part 2 of the "Preventing Violence" series, the Jackson Police Department and the Hinds County Sheriff's Department rolled out a new program called MACE, which in theory could have worked but without funding and focus turned into another increase in policing and "blue lights" in targeted trouble areas. The program increased enforcement but without the services piece.

It's not OK to promote a program that can result in over-policing young men who are at the highest risk for not only shooting others but being shot and killed themselves. We don't entirely blame law enforcement. Funding is not readily available, with the City of Jackson's revenue streams drying up in part because of probably-mismanaged water contracts. Revenue collections in the City are down millions of dollars based on budget projections for the fiscal year, due to complications of implementing billing technology from the Siemens contract.

The media and the public help perpetuate "bad neighborhood" memes. When a neighborhood is perpetually framed as a backdrop in broadcasts as a crime haven, the projected image becomes reality. The community thinks certain parts of Jackson are dangerous, and thus, development and resources stay away from the red-lined area we've proclaimed as a crime haven. Instead of resources, we send the cops to solve problems more vast than their job descriptions could begin to address.

The public has to want more than to treat young people, many suffering from trauma that comes from being raised in an unstable, violent environment, as "superpredators" or "thugs." These are young men and women who need jobs, education and support from the public sector and the community. It takes an engaged public to hold law enforcement accountable by vetting programs that use taxpayer dollars, mentoring those young men and women and providing resources for research-based programs that do not merely lock people away, hold them too long and spit them back into the same environment they came from. It's the community's job to stem the cost of violence by investing and encouraging agencies to investigate and perhaps invest in evidence-based programs such as Cure Violence or the real Operation Ceasefire.

While we applaud the sheriff's department for programming services for all age groups, one group is too often absent from the list: the group that needs programming the most. Young men are pulled into rigid bootcamps but would benefit more from GED courses, job training and professional development. It's time to look at crime and policing from a larger lens; it's not about who shot who. It's about why violence is occurring in the first place. If we're going to bring down crime in Jackson, it needs to be together, and include the men whom policing most affects in the first place.