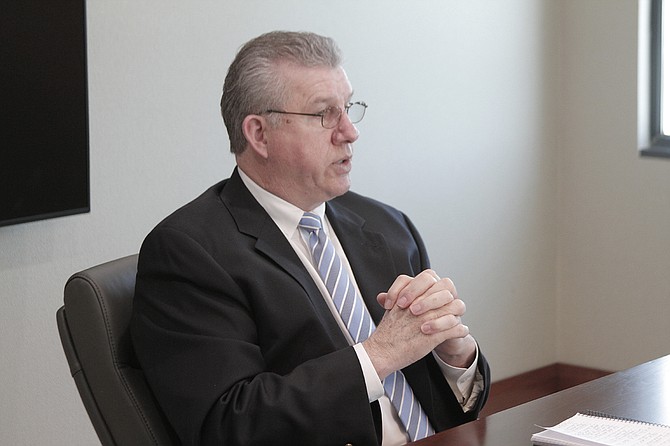 JACKSON — Rumors swirling around the county about who would get lucrative contracts to help build and service the new Continental Tire plant prompted the Hinds County Board of Supervisors president to address the Hinds County Economic Development Board in a special meeting Thursday.

President Darrel McQuirter told the Jackson Free Press today that it is going around that the contractors were already decided, which doesn't please some people who would like a shot at the potentially lucrative contracts. "I don't want to elaborate about something that I don't know about, but that's what we are getting hit by on talk radio, that the supervisors are not aware of the different contracts that have been let out," McQuirter said.

"They pretty much said that all of the contracts had been handed out; that's the misperception that we were dealing with."

Work on the nearly 1,000-acre site in Hinds County, a project Gov. Phil Bryant announced in February, will mean hundreds of millions of dollars in construction costs. Which companies receive the contracts has been a hot issue as the company's projected beginning date for site preparation in the fall of 2016 approaches.

"What is happening right now, that you may not see and may not be aware of, because the authority's focus is strictly on economic development, is this undercurrent that is happening is our community," McQuirter said at the meeting. "And we have to figure out some kind of way to address it and deal with it."

The Board of Supervisors had decided Monday to contract with Jackie Andrews of KSA Professional Services, LLC, as the county's representative to Continental Tires, instead of the Hinds County Economic Development Authority, HCEDA. McQuirter said he was presenting the resolution to the HCEDA so that they can work together to calm the rumor mill.

KSA Professional Services, LLC, is registered under the name Jacqueline Williams Andrews, presumably the Jackie referred to by McQuirter. The company was established in May 2013 under the current name, although records from the Secretary of State's website indicate that the organization changed its name from Fisher Management, LLC, at some point in the past. Andrews was not present at the meeting.

"The purpose of going with Ms. Andrews ... is something that is directly related to the fact that we felt we needed somebody to have a stronger voice at the table as it pertains to the issues we are dealing with every day on the street level, and in the community, and with the people that elected us and put us in office," McQuirter said.

McQuirter said Andrews would create reports for the Board of Supervisors about the status of the contracts involving Continental, including who receives them and who is employed to carry them out. While he did not indicate that the reports would be released to the public upon completion, he did say that they would qualify under the Public Records Act.

Hinds County Supervisor Robert Graham said he felt the need to speak more directly to the problems his constituency had communicated to him.

"They feel as if there have been deals that have been cut, through less formal communications, rumors, whatever," Graham said. "They feel like there's been several people that have already made contact, they feel that it is because of the Authority."

"That's something I have had to deal with. And those rumors have persisted since day one."

Blake Wallace, executive director of the Hinds County Economic Development Authority, said that as far as he knew, Continental Tires had issued no contracts, yet.

"There are no contracts that have been bid or awarded other than the engineering firm that will have total oversight of the project. They haven't told us whether they have been chosen, but the last time we heard anything on it, they were down to two companies, and they were working back and forth with those two. And we don't know who those two are," Wallace said.

"We are more than willing to share all of the information we have regarding the project," Wallace added. "Just listening to the concerns here, I get the impression that you think we have some information that we are not sharing with you. And I can assure you that's not the case."

Construction of the facilities, Wallace said, will not start until late 2017. The site preparation isn't going to start until October of this year at the earliest. In order to create some level of transparency, Wallace said, Continental is working to create a online portal for contractors to register for bids. Wallace said that the final decisions about who gets the work are the company's alone.

"The company is diligently working with MDA to create a website where all of the contractors in this county and in the state can go and register for different types of work," Wallace said.

Wallace said that portal will include links for the site preparation and construction of the plant, as well as services needed after the building is completed, like security.

"That website is waiting on some information from the company," Wallace said. "The company is doing everything it can to make it available for different size businesses to bid on."

Wallace said this included "breaking out as best they can the different components of the project" to allow for more contractor to participate.

"We need to let our citizens know that this is a lot further down the road than what they are thinking. We don't know a lot about the jobs and things. The company is not focused on that because they won't start their hiring process until late 2017, possibly even (2018)," Wallace said. "But when it does start, all of their positions will be posted on the company's website."

Wallace said that the county would know more about the timeline for the construction after a planned May 17 visit by Continental Tire representatives.

"They are going to meet with Entergy and Atmos. They will meet with the companies privately, and we will not be invited to those meetings," Wallace said.

Wallace, however, said that he was confident that they would be discussing a timeline so that the energy companies can plan their own timelines for construction.

"I think things are getting to a point where you are going to see more information coming," he said. "The reason there has not been a lot is because there is not a lot. They are spending their time getting everything in place, getting their timelines down."