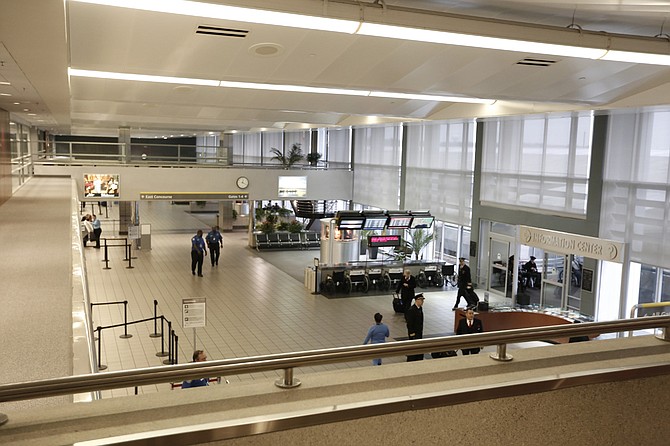 Efforts and stallouts at Baton Rouge and Charlotte airports indicate several options for how SB 2162 might play out for the JMAA’s governance. Photo by Imani Khayyam.

JACKSON — The Jackson-Medgar Wiley Evers International Airport is not the only municipal air-traffic hub looking down the barrel of a state-sanctioned reorganization of its governing board.

In Charlotte, N.C., the Federal Aviation Administration has still not announced a decision about the status of the license and, therefore, approval of a license for the commission the state the North Carolina General Assembly created, similarly to the Mississippi Legislature's vote to take control of the Jackson Municipal Airport Authority. The North Carolina bill, now law, was Senate Bill 380, filed on March 20, 2013, and ratified on July 26 of the same year.

Not but three days after the bill became law in 2013, the FAA sent the Charlotte city manager and the state attorney general a two-page letter detailing several issues with the law. Until those issues could be addressed, the FAA warned, "the city of Charlotte remains the airport sponsor and the certificate holder," as it still does today.

"As we read Bill 380," the July 29, 2013, FAA letter stated, "an Airport Commission is created which would operate the airport and control the airport property, but title to the airport property would remain with the city when the act becomes law." One of the few undisputed facts in the ongoing discussion about the Jackson airport is that the City of Jackson will remain the deed holder to the property. That is exactly what Mississippi's version of the bill states.

"Upon consent of the governing bodies, the Airport Commission could also acquire other general aviation airports," the North Carolina law continued. Months ago, during the arguments on the floors of the Mississippi House and Senate, several opponents of the airport "takeover" bill argued that exact same point.

But the real meat of the FAA letter to North Carolina leaders is in the description of the review and approval process of the eligibility of the "sponsor" for the license to operate the airport.

"This review requires the sponsor, in this case, the newly formed entity, to demonstrate to FAA that it is legally, financially, and otherwise able to assume and carry out the certifications, representations, warranties, assurances, covenants and other obligation required of sponsors...," the letter states.

What is the one "obligation" that both the new Charlotte commission and the soon-to-be created Jackson commission fail to meet? "The entity must complete a title search to verify that all federally-obligated airport property will be under control of the new entity," the FAA warned.

"I don't think its about what the FAA may want to do, may require or not," Sen. John Horhn, D-Jackson, said. "I think it's a small group of people who decided that they were going to take the airport regardless of what the law says."

The City of Jackson controls and owns the land that the airport sits on. The question is then whether this new commission can "give assurance that it possesses good title for the airport lands in its control"? And "if it does not possess good title," can it give "specific assurances to FAA that good title will be acquired"?

In Charlotte, the new commission may have trouble proving this satisfactorily. The Charlotte Observer reported on Sept. 3, 2015, that the new commission was half a million dollars in the hole for attorney's fees as was the city itself in the ongoing legal battle. But, as the battle continues, the city maintains control.

"Again, please keep in mind that until FAA approves the transfer of Federal obligations and issues an Airport Operating Certificate to the new entity, the city of Charlotte remains the airport sponsor and the certificate holder," the FAA letter said.

Gregg Watkins, communication manager for the current Charlotte Mayor Jennifer W. Roberts, did not wish to go on the record with a comment about the FAA's pending decision but did share that the commission had very little to do with the airport or its functions at this point.

Baton Rouge, La., like Jackson, experienced a drop in the number of passengers serviced during the last few years. And just like Jackson, it lost these customers to the New Orleans airport. So, Baton Rouge hired a consulting firm, Emergent Method, to research its market. Emergent, in a report, described these drops, the movement to New Orleans, as well as the economic impact this would have on the area.

For instance, as far as numbers go, although Jackson loses an average of 146 customers a day to the New Orleans airport, Baton Rouge is missing out on 1,217 customers a day as of September 2014. The two airports also lost carriers during the last few decades, including Southwest Airlines.

In response, the Emergent study examined the structure of the governance of the airport. At the moment, the Baton Rouge airport operates as an extension of the City of Baton Rouge, governed by a 12-member advisory commission, which is in turn ultimately governed by another comprised of the mayor-president and the Metropolitan Council for East Baton Rouge Parish.

If that seems like a lot of oversight, the study agrees, citing comments from community stakeholders complaining about such a "convoluted structure through which decisions must be made, and (that) thus diminishes the role of the Airport Commission in providing the appropriate level of governance for such decisions."

The study does not then suggest more commissioners, as Mississippi's bill does, but instead "enacting legislative changes at both the local and state levels that streamline the (Baton Rouge) governance structure and foster more organizational and operational autonomy."