Foster Care Legislation: ‘The Beginning to an End of Madness’ 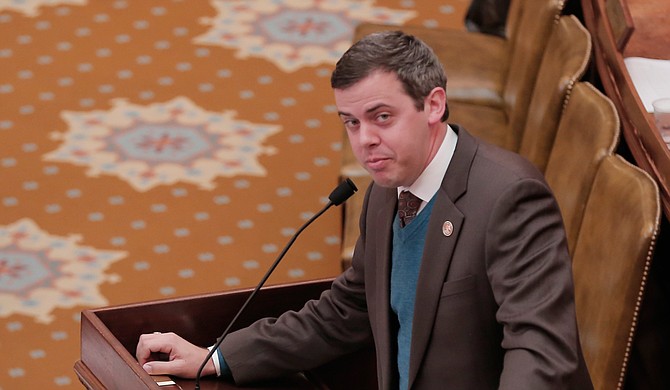 Rep. Toby Barker, R-Hattiesburg, (pictured) and Sen. Hob Bryan, D-Amory, both took the lead on initial foster-care legislation last week in the Mississippi House of Representatives and the Senate. Photo by Imani Khayyam.

JACKSON — An infant died only five days after entering the state's custody a year ago, into a foster home not inspected by a state worker, with a foster mother who was recently convicted of a criminal offense and had lost her job.

The court monitor's most recent report reveals that the infant, called "CD," died due to systemic problems with staffing, resources, data collection and enforcement of the Mississippi Department of Human Services' processes, which let to CD's placement in an unsafe foster home.

"CD" and other children who have suffered in the State of Mississippi's custody are finally getting the attention they deserve in the Legislature. Last week, legislation that would help the state comply with a court order in the almost-12-year-old Olivia Y lawsuit stayed alive in both the House and the Senate.

The state's foster-care system, now housed under MDHS as the Division of Family and Children's Services, must comply with a court order in the Olivia Y lawsuit to avoid federal receivership this year. The court order specifies deadlines for the division that require legislative action. 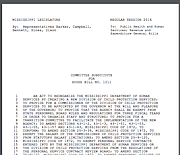 Rep. Toby Barker, R-Hattiesburg, worked on House Bill 1011 in coordination with the MDHS to help the new division comply with the court order by identifying which workers are transitioning to the new division and how responsibilities are allocated and transferred for those workers.

Barker told the House last Monday that his bill would bring the new division into the "in-but-not-of" model that the Olivia Y court order requires. The bill, which passed the House by an almost unanimous vote, establishes a new division of "Child Protection Services" under MDHS. It sets qualification and salary standards for the new division's director (currently that director is ex-Supreme Court justice David Chandler, appointed by Gov. Bryant last winter) and exempts MDHS and the new division from oversight from the state personnel board and the personnel contract review board for three years. These steps are pulled directly from the court order that mandates the "Governor will take all reasonable steps, within legal authority, to exempt MDHS and DFCS from State Personnel Board oversight for a period of at least 36 months, beginning July 1, 2016."

The bill does not explain the financial needs of the new division, but Rep. Barker said the larger and central problem is a lack of social workers in the division.

Rep. Adrienne Wooten, D-Jackson, asked if the number of social workers needed for the division to avoid receivership is spelled out in the bill.

"Does the bill address how many more social workers need to be hired, and how much more money needs to be put in the budget as it relates to additional social workers?" Wooten asked Barker.

"No, because you could put it in this bill all you want, but if it's not paid for in the appropriations process, it doesn't mean anything," Barker said.

Later, Barker said the division needed to create and fill 260 new positions in the division. The Division of Family and Children's Services requested a $34.4 million increase in their fiscal-year 2017 budget.

At press time, the House MDHS appropriations bill did not reflect the $34.4 million increase.

Currently, state social workers are wildly overworked. The court monitor's report, published in January, found that 64 percent of the division's workers had more cases than the lawsuit's modified settlement agreement allowed. Sen. David Baria, D-Bay St. Louis, spoke in favor of the bill, saying that at one point in Hancock County there were "three and a half social workers" for upward of 450 kids in the state's care. Baria chaired a task force in his county to deal with their foster care problem.

Rep. John Hines, D-Greenville, who has served in the Legislature since 2001, also spoke in favor of passing the bill, despite what some of his fellow Democrats felt were risks, including no oversight from the state personnel board for MDHS for the next three years.

The Senate also passed a foster-care bill last week, which would establish an entirely new department called "Child Protection Services" outside of MDHS by July 1, 2017. The transition from division to department could be possible, but it will likely take time.

Marcia Lowry, an attorney at A Better Childhood (one of the plaintiffs in the Olivia Y case), said that a slower transition for Mississippi's foster-care system is a wise choice.

The Public Catalyst group, which conducted the multiple studies of the state's system, made the recommendation to first put the system in a separate division under MDHS and then make the transition to a separate department.

"We agreed that the process would be better off going more gradually because the agency is in such bad shape and the kids are in such jeopardy," Lowry told the Jackson Free Press. "I don't think there's any magic way to do it."

New Jersey's foster-care system went through an overhaul similar to Mississippi's, but their system was in good enough shape to transition directly into a separate department. Lowry says Mississippi's system is not ready to do that—in other words, the House bill needs to go into affect first to get the agency functioning well before it gets out from under MDHS which is the ultimate goal both Lowry and Barker said.

"In Mississippi the effort needs to be on fixing the issues—yesterday," Lowry said.