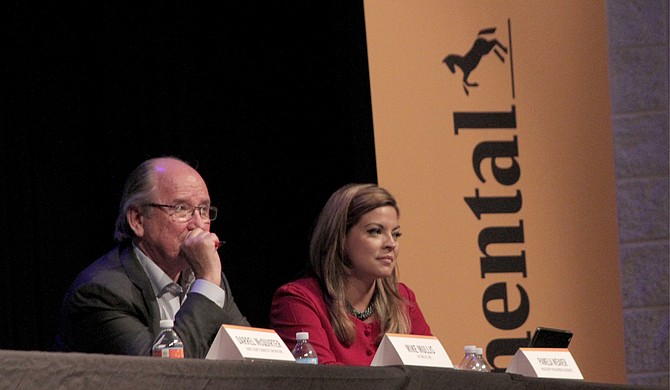 JACKSON — The parking lot overflowed with traffic, and cars lined the two-lane road that leads to Clinton High School. Even the foyer in front of the auditorium was full of milling latecomers who weren't let in to the first town-hall meeting with Continental Tire last week after the auditorium filled up.

Continental Tire is set to begin work on its Mississippi tire plant, which will start with clearing the 900-acre site just outside Clinton. While it won't be hiring any actual employees until October 2018, contracting work is available in the coming months for Mississippi businesses.

The site has to be cleared and prepped before plant construction even begins, and Continental Tire is looking to Mississippi contractors to do the work. The process to apply is online through a website developed in conjunction with the Mississippi Development Authority. Contractors were urged throughout the town-hall meeting to go online and submit an application.

Clearing the ground will be quite a job on the mile-wide and mile-long site off Interstate 20, and work is set to start in October.

Gov. Phil Bryant called a special session in early February that solidified Continental Tire's presence in the state. Lawmakers pushed the incentive-package bill through the Legislature in a one-day meeting.

The State will issue $263 million worth of bonds on the project, and the Associated Press estimates that the whole project will cost the state $600 million by its end, including other incentives.

Continental Tire will invest $1.45 billion in the project and create 2,500 full-time jobs, the bill authorizing the project states.

Under Mississippi law, Continental Tire has a deadline of December 2020 to reach its hiring capacity, but as Continental spokespeople told a packed Clinton auditorium, building the facility will take time. Contract work will take up the next two years, and hiring is set for October 2018. 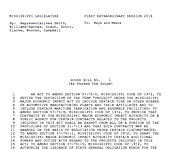 Grant Bovim, the project leader of the Clinton plant, said the initial hiring will be around 100 people in October 2018, with more added in 2019. The plant will not reach 2,500 jobs, however, until it can expand its plant and grow, Bovim said, which will likely be around 2020.

All Continental Tire plants are benchmarked against one another and fight for the most productivity. Bovim said the more a plant produces, the more money they make in order to expand.

As for hiring, Continental Tire will have to hire an array of workers from machine operators to technically trained engineers. Kathryn Blackwell, vice president of communications and marketing, said the company does not use contracted workers often for work inside the plant. Mississippi's statute that activated the plant mandates that the average annual compensation be $40,000.

Michael Mullis, owner of the Memphis-based project-location specialist firm, J.M. Mullis Inc., worked on the project and with Continental to find a site for its new plant. The firm also helped the other most recent tire plant now located in Sumter, S.C. Mullis said work on the project was over two and a half years in the making and at one point was even in jeopardy due to a lulling international market in China and Russia.

"We started with 16 states in the U.S. and 54 locations," Mullis said at the town-hall meeting.

"We started with a project that was about half of the size that we have now."

Continental Tire considered both workforce and location, and Mullis said community colleges were involved in conversations for the project as well as state and local leadership at multiple levels.

"One of the key reasons we're here is the commitment of the community-college system to grow and continue to grow the workforce who are required to build tires," Mullis said at the town hall.

Because Continental Tire is an international company—only 18 percent of its employees are based in North America—the ability to transport material was also crucial to the location, as well as the site's size.

Mullis credited the state's legislative leaders and the governor; Darrel McQuirter, president of the Hinds County Board of Supervisors; the whole Mississippi Development Authority staff and community colleges for staying focused on the project, and meeting with Continental representatives 35 to 40 times over the past few years to make the project happen.

Local contractors will be able to work on the Continental site leading up to its official ribbon-cutting ceremony in 2019. The German company is looking to work with contractors to do clearing, site preparation, EPCM (engineering, procurement and construction management) and deep piling. The Clinton plant is also looking to hire a general contractor in December 2017.

Only Mississippi-based contractors can apply through the MDA website, but that does not mean Continental is constrained to only hiring contractors in the state.

"It's very important that we try to find as many suppliers in the community and state that we operate. That was true in our Sumter site, and it's true here," Blackwell said at the meeting. "So we will do the best that we can to find local suppliers."

Blackwell said Continental Tire has a record of promoting and hiring minority- and female-owned businesses as their supplier base.

"We, just last month, received a major award from General Motors recognizing our efforts to recognize minority and women-owned businesses," Blackwell told reporters after the meeting.

Mississippi's state law authorizing the plant says that "Mississippi Disadvantaged Business Enterprises ('DBEs') shall have an equal opportunity to respond to" bids for contracting services.

The law further says that once Continental identifies successful prime contract bidders, those contractors must "include in their response a commitment to participate in and/or host forums that highlight subcontract bidding opportunities for DBEs and work with various trade associations and MDA to promote increased participation."

Black lawmakers worked hard to get that provision into the bill during special-session committee meetings.

Sen. John Horhn, D-Jackson, said he's concerned because it appears that no state agency is going to monitor the involvement of DBE contractors and businesses in the process—beyond the website MDA set up.

"I think we need to be more intentional and more willful, and unfortunately, a lot of the companies we're talking about need more attention than that portal," Horhn told the Jackson Free Press.

MDA has a minority and small business division that will work with Continental, but ultimately Continental Tire controls the contracting, Jeff Rent public relations manager at MDA, said.

Rent said Continental had an impressive record with its contracting on the South Carolina plant, especially including subcontractors that represent minority businesses.

The Hinds County Board of Supervisors is contracting with Jackie Andrews of KSA Professional Services, LLC, as the county's representative to Continental Tire.

In a May meeting, Hinds County Supervisors President Darrel McQuirter said that Andrews would create reports for the Board of Supervisors about the status of the contracts involving Continental Tire, including who receives them and who is employed to carry them out.

While McQuirter did not indicate that the reports would be released to the public upon completion, he did say that they would qualify under the Public Records Act.

Contractors (and eventually prospective employees) can access the Request for Proposal forms at Mississippi.org/ continental. Forms submitted on the site are available through public-records requests, MDA Chief Marketing Officer Pamela Weaver with MDA, said at the town hall. She also emphasized that submitting an application is not a guarantee of work.