To Fetch a Pail of Water 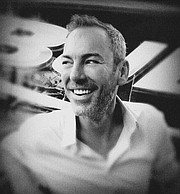 This summer marks 25 years since I came out of the closet. Today, coming out happens so often in the world of the Hollywood A-listers, athletes, journalists and elected officials that it hardly makes news. Harvey Milk said we must come out and, while not everyone can right now, plenty visible folks are twirling out of the closet, wire hangers and all.

Back in the summer of '91, all we had was Pedro on "The Real World" and the occasional queer best friend in TV and movies. Hell, as far as I knew, I was the only homosexual to come out of Humphreys County. That's one of the worst things about being a gay kid: the solitude in which you live. If you can't point to something that "looks like you," then you're forced to look inward for comfort. Or, at least I did. I spent many a fearful night alone, not because I was longing for someone to love me, but because I didn't feel that I belonged anywhere. Imagine how I felt at 19, standing in a bar full of my people for the first time. No, wait. First try to imagine the courage it took to accept the invitation from a friend to come along to that gay bar.

I'd just told a friend that I "thought I was gay." That was a big step for me. Saying those words out loud for the first time—to a living breathing human—was indeed very liberating, but I wasn't ready to do high kicks in the food court at the mall just yet. In my mind, saying those words was just the first step of many steps that led me to shouting from the proverbial rooftop today.

I left that conversation without quantifying that it was just between us. Soon, to my dismay, a small gaggle of queens was standing on my doorstep asking if I'd let them take me for my first trip to a gay bar.

"We have one of those!?!" I asked innocently.

Congregating with other gays was on my list of steps, but I hadn't even begun to think that far ahead. I had just moved from "I might be bisexual" to "I think I'm gay," and now they wanted me to skip important steps like "brush up on gay slang" and "perfect the gay face."

After several minutes of brow beating at the hands of this group of homos, I said yes. Then, we discussed outfits. I figured my extensive library of music from all the typical divas—on cassette, no less—and a love for theatrics qualified me to jump ahead a bit.

Later that night, said gaggle of gays came to pick me up. While one smoothed my hair flip and another re-knotted my woven leather belt, each took turns dolling out advice.

"Don't drink from an opened beer given by a stranger," one said cautiously. "Unless you want to get dosed."

"We go to the bathroom in pairs." My friend said, while rolling up my sleeves.

He smirked. "Eddie, we pair up so nothing screwy happens in the bathroom."

"OK ... " I muttered, wondering what could possibly happen at a urinal—in a gay bar—that required backup.

Another cocked a brow and caught my attention. "Do not, under any circumstance, take off your shirt."

"Obviously!" I returned. I was no supermodel, and God knows I had body issues that very nearly made it impossible to trust myself when shopping. "Why on earth would I take off my shirt?" I asked.

"That's what trashy queens and muscle-heads do," he replied. He then advised me that I was a "twink" and "preppy," so I should align myself accordingly.

"But I just started growing my hair out," I implored.

"Why on earth?!!" said one of the queens, appearing to clutch a string of imaginary pearls.

"I like Dan Cortez's hair," I said matter-of-factly. "I'm going with the 'grunge' thing that's happening now." The Seattle music scene was coming into its own and, like a visionary, I had predicted flannel and ripped jeans as the future. "I'm even thinking of getting my ears pierced," I added.

"No ma'am!" squealed the gaggle, in unison—like they'd rehearsed it.

"Eddie, honey, let me be frank: You are transitioning," he said while doing flamboyant air-quotes. "You are not a coffee shop-open-mic-night-garage-band type. You are a sweet boy from the Delta who just happens to be preppy. Trust me."

I was, at once, flattered and insulted. Adopting "grunge" wasn't just a fashion statement for me. I was trying to get away from that former self that hid in a flock of preps, blending in and playing along. I wanted to be different while setting out in my new life.

"Eddie, you'll see when you get there," he said, sensing my unease. "Stick with me, kid. We can't have you looking like you just rolled off the turnip wagon, now can we?"

I was shocked. Not at the part where he implied I was a country bumpkin who didn't know how to act. I was taken aback that there were "types" of homosexuals.

I naively thought that the gay community was just that: a community. Not another version of high school where you had to worry about what table to sit at or what clique to run with.

He looked even more sympathetic and narrowed in on my naivete. "Nelly, you're not to leave my side tonight," he demanded. "You're too gullible for your own good." Then added, "Thank God we found you when we did!" and they all cackled.

I couldn't help but think that, without these new friends, I'd have stumbled into a pack of "math and science nerds" or "band geeks." Thank God, indeed.

We made the drive into Jackson as Erasure blared from the speakers of the teal green Honda Accord. The driver steered off Interstate 55 and onto High Street.

Moments later, we were on the west end of downtown, pulling into a gravel lot. The bar was called Jack and Jill's, and it was in a two-story building on the far end of Capitol Street across from the then-boarded-up King Edward Hotel.

A long line had formed at a gate that led to the courtyard just outside the bar. My heart fluttered when I heard the bass booming from inside. I looked at all the people in line and wondered how many more of these people like me were inside.

For years to come, I still got that giddy feeling while standing in line outside a gay bar. I never went in search of drugs or for the liquor; I was never caught up in the social structure or politics of the scene. I was always there, ever hopeful that my future love was waiting for me. I hate to make a "Sex and the City" reference here—although Jackson was as close as I'd ever been to New York City, so it might as well have been—but I've always been the Charlotte: ever hopeful, always looking and naive to the core.

I couldn't know it then, but that feeling that I was "congregating" with people like me would lead me to the belief that a gay bar was the closest thing we, as a people, had for a church. It was the summer of '91, and being gay was only just becoming acceptable.

I stood on my toes, trying to look beyond the line onto the patio, and the courtyard looked to be full of my people. My heart swelled with pride.

"This is where I belong," I thought to myself. "We are everywhere."

Eddie Outlaw is co-owner of the William Wallace Salon in Fondren and spends most of his time trying not to embarrass his sweet Delta mother on social media.