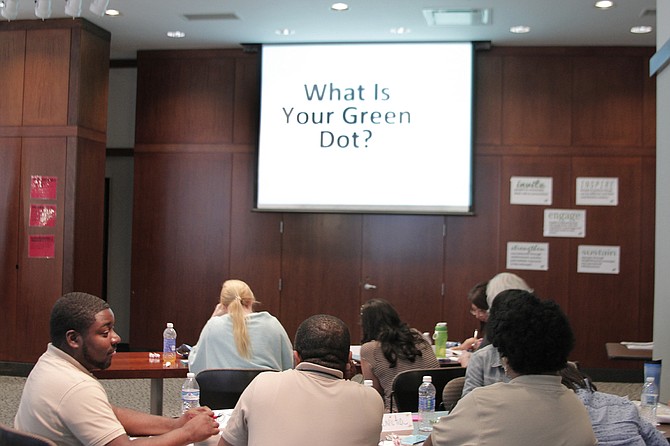 Green Dot, etc. trainers held a four-day training for staff from Mississippi’s domestic-violence shelters to learn how to prevent violence and instruct communities throughout the state in becoming active bystanders. Photo by Arielle Dreher.

JACKSON — "Ask your listener to imagine a map of your community with red dots," senior trainer Nina Johnson advised workers from domestic-violence centers across the state on June 6 in a conference room at the State Woolfolk Building. The trainer for Green Dot, etc. then explained those dots.

The room was mostly silent except the occasional scratch of a pen on paper, as participants took notes to help write their 90-second anti-violence pitches back in their own communities. Green Dot, etc. is a community strategy aimed at ending domestic violence, sexual assault and stalking.

Next, Johnson said, they would need to explain the answers to the problems—the green dots. "Those are choices or behaviors to stop harmful behaviors from taking place," she explained.

An example of a green dot could be saying to someone in danger: "Hey I've been concerned about you since you've been in that relationship." Or, "Hey, cool off. It looks like things need to calm down here." A green dot also could be sharing an article or a social-media post, or one of the actions the group had brainstormed that day, she said.

Participants had filled posters with specific "green dot" actions any person can take to stop sexual assault, stalking and domestic violence in their community. Trainers had placed "Direct," "Delegate" and "Distract" posters around the room; participants then added ideas from writing Facebook statuses to asking for directions in order to diffuse a contentious argument.

After a nearly silent 10 minutes while they wrote their pitches, the room was abuzz as participants practiced their pitches on someone they didn't know from across the room and likely across the state and offered one another feedback.

"Oh, I liked your scenario at the end."

"Maybe you could give a more specific example of a green dot in your community."

"Don't forget to say what the problem is in your community."

Nearly one in five women report experiencing rape at some point in their lives, Centers for Disease Control data show, and the percentage of Mississippi women who experience rape, physical violence or stalking by an intimate partner is higher than the national average, a 2010 CDC study shows. That same report estimates about 460,000 female victims of intimate partner violence in the state in 2010.

Using federal funding, the Mississippi Department of Health is working to bring those numbers down by implementing Green Dot training across the state to get communities to reconsider their role in preventing violence. At last week's four-day training, MDH had staff at the state's domestic-violence shelters go through training to be Green Dot instructors after training rape-crisis center staffs last year. Now they will return to their communities across the state and train community members there.

The agency hopes the training will have a ripple effect, training people from teachers to bartenders to be engaged bystanders, knowing how to intervene to prevent violence. Green Dot also offers college and high-school training, but for now, Mississippi's strategy will focus on adults.

Melissa Emmal, director of community engagement for Green Dot, etc., helped facilitate last week's training in Jackson for staff members at the state's domestic-violence shelters. She said Green Dot training differs from similar violence prevention or bystander trainings because it acknowledges barriers people might have to intervening and encourages involvement from everyone in the community and offers them alternatives to intervening directly if they are too shy to do so.

For example, if a bystander sees a disturbing relationship between co-workers, a "delegate" approach would be to turn in an anonymous tip to Human Resources instead of confronting either coworker directly.

"The reality is that most people can think of times in their life when they've seen something that's concerning, and it's been hard to step in," Emmal told the Jackson Free Press.

Instead of encouraging people to merely overcome those barriers and directly address potential problems, Green Dot training offers the three options: direct, delegate or distract. Green Dot trains community members to delegate an action to a friend or another party or, in some situations, simply distract from the current situation at hand.

"'Distract' is literally thinking ... 'Is there something I could just do in this moment to lessen the likelihood that harm is going to happen?'" Emmal said. "So it could be you see a couple arguing in a store, and you literally just go up and ask for directions or spill a jar of pickles and break it or set off a car alarm."

The idea is to get people equipped to do something realistic, Emmal said, so communities will become full of engaged bystanders that actually have tools.

Green Dot training also acknowledges that an average person might not witness an instance of violence, and in those moments when a person is not directly intervening, you can still do things like inviting others to join the movement in conversations or on social media to influence community norms. The norm Green Dot seeks to set is that no violence is tolerated in any community.

"Not because of a law or policy, but because it's really not," Emmal said. "Because the citizens say it's not, and if you're a part of this community, you do your part to keep it safe."

"The hope is that both of these organizations that are funded through our office and ultimately through the health department would start layering the community with this Green Dot message, which is bystander intervention, then eventually we will move down into college age and into youth," Ainsworth told the Jackson Free Press.

Mississippi's domestic-violence programs received 40,317 calls for emergency assistance or referrals in 2015, but law-enforcement officers only submitted 10,131 domestic-violence offense reports to the attorney general's office in the same year.

The data disparity is likely because not all victims report incidents—and clearly even if a victim does make a report, it isn't always to both a domestic-violence shelter and law enforcement simultaneously. Ainsworth, who used to work in an emergency room, said that data do not give a complete picture of the problem.

"Not every victim calls a shelter, and not every domestic violence offense is reported; they (the numbers) are a small portion of what is actually going on," Ainsworth said. "A lot of victims come in ER that didn't want to go to the shelter or didn't want to call the police, so there's some missing numbers there."

Ainsworth and Emmal hope that Green Dot training will start a movement of bystander intervention in the state and ultimately drive down the state's domestic violence rates.

All the Mississippi staff members who went through the four-day training are now certified to do one-hour and longer five-hour bystander intervention trainings in their own communities, targeted at people with social influence.

Emmal said in her Alaska community, a local bartender went on the news to talk about his training experience.

"No one has to do everything, but everyone has to do something, and (learn) how to be an active bystander," Ainsworth said.