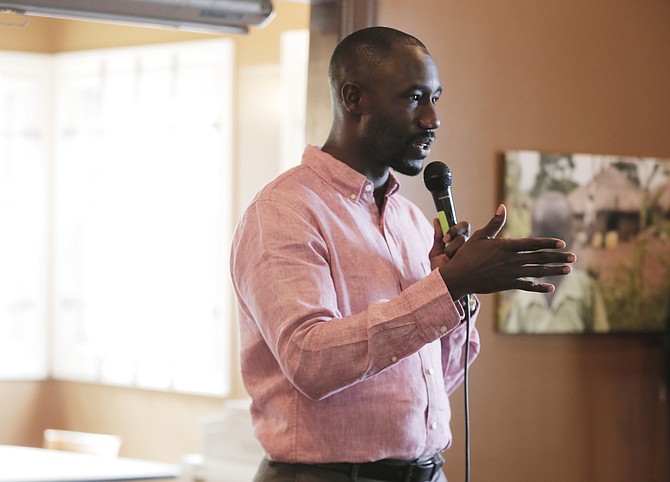 Mayor Tony Yarber announced for the first time publicly that he will run again, joining the now short list of confirmed candidates for the 2017 race. Photo by Imani Khayyam.

JACKSON — Mayor Tony Yarber announced his campaign for another term for the first time publicly at the weekly Friday Forum at Koinonia Coffee House, urged on to make the statement from former mayoral candidate, Jonathan Lee, an organizer of the group.

After the mayor gave a presentation to the assembled group of citizens, Lee said he he wasn't running but wanted to know if Yarber had decided yet.

"We have a massive plan," Yarber said. "We have a capital-improvement plan for the first time. So you think I am going to let somebody come in and take all the credit for that? Yeah, I'm running again, and I am running hard."

Yarber joins other candidates that have announced in the last few weeks, including Hinds County Supervisor Robert Graham and the son of a former mayor, Chokwe A. Lumumba.

The mayor ran through what he called a "buffet of issues" for the crowd, including the state of crime and the possible consequences of the budget constraints.

"(The police) are running some of the lowest crime numbers than they have ever run before," Yarber said, adding that "any homicide is a bad thing."

Yarber said that a study in 1998 found that the police department should have at least 500 officers but that the numbers they are delivering are impressive because the police only number 395.

"You have a police department of 395 officers doing the job of 500, and that is commendable," Yarber said.

Yarber also commented on concerns about the city dipping and depleting its reserve fund to meet budget commitments along with unforeseen expenditures, passing the blame to the city council.

Yarber said that the City's structure was based around a 1980 census number of 200,000 people, when Jackson's actual population now is around 173,000. As a result, he said, the City would be looking to "right-size" their staff, departments and perhaps programs.

When his administration looks through the programs they offer, he said, they must show that they are "bearing fruit." If they're not, he said, "then we have to make those kinds of decisions," he said.

As to whether he was considering layoffs of City employees, Yarber said it was similar to what a business owner would do in tough times.

"What we anticipate is having to make decisions about restructuring," Yarber said. "Every department is being charged with restructuring their department. We aren't looking to do anything differently than what you have to do at your small businesses."

He compared it to a homeowner deciding about the extraneous wants versus the absolute needs of the household. "Some of you have to make decisions about cable," Yarber said, comparing it to whether or not to have premium channels. "And so the City is going to have to make those same decisions."