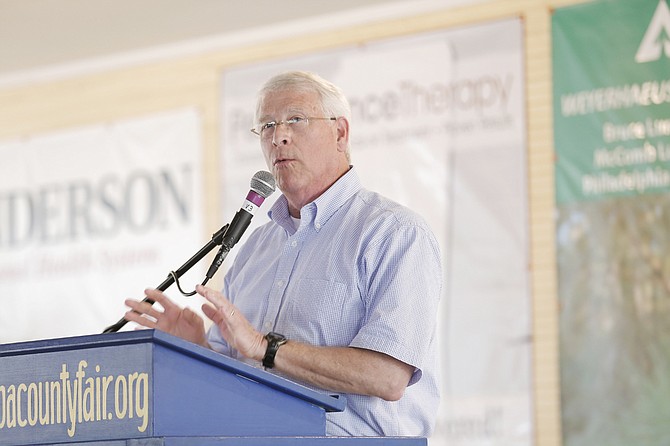 U.S. Sen. Roger Wicker, R-Miss., encouraged fairgoers at the Neshoba County Fair to vote for Republican senators and not for Hillary Clinton in the upcoming November election. Photo by Imani Khayyam.

JACKSON — U.S. Sen. Roger Wicker, R-Miss., who spoke at the Neshoba County Fair on Thursday, called on fair-goers to elect Republicans back to the Senate, and to support Donald Trump in November.

"There's a lot at stake, there are viable decisions hanging in the balance this year, and that's why this election is so important," Wicker said Thursday.

Wicker said the Republican nominee for president would repeal Obamacare, while Hillary Clinton, the Democratic nominee, would not. Wicker said Trump would sign the Keystone Pipeline bill as well as bills to de-fund Planned Parenthood—while Clinton would veto them. Mississippi has only one Planned Parenthood clinic, and it does not perform abortions.

"There are only two people who have a chance to be the president of the United States this year, and that's Donald Trump and Hillary Rodham Clinton," Wicker said.

He said that a group of veterans he spoke with in Mississippi agree with him that it must be Trump over Clinton. "I think they join most Mississippians in saying emphatically that Hillary Rodham Clinton must never get back to the Oval Office," Wicker said.

Wicker told the Jackson Free Press that he doesn't know of a presidential candidate that he has agreed with 100 percent, but said he does agree with Trump on the main issues.

"There's so many of the main issues that will actually affect the next four years and the next generation that I agree with," he said. "Particularly on the Supreme Court and some of the things I mentioned in my address today."

Wicker spoke at the Republican National Convention earlier in July and served as the Senatorial Committee chairman at the convention. At the Neshoba County Fair, he pointed to the progress that the Republican majority has made in the U.S. Senate since they gained the majority in 2014.

"It is my duty to lead the campaign (for the Senate Republicans) and make the case that Republicans deserve the Senate majority again," Wicker said.

Wicker said the Senate sent 31 bills to the president's desk that became law so far in 2016, which has not happened since 1990. Things are getting done, Wicker said. Wicker pointed to the bi-partisan bills the U.S. Senate worked on to address opioid addiction, the Zika virus and care for veterans. Wicker's EUREKA bill, which seeks to fund Alzheimer's research, will be included in a larger bill to address public health, he said.

The senator also co-authored a bill that would kill any "sanctuary city" ordinances passed by cities or states to protect immigrants, much like a bill that failed in the Mississippi Legislature in 2016. Wicker told the Jackson Free Press that the federal level is an appropriate way and manner to address those issues.

Wicker is not up for re-election this November, but all four Mississippi U.S. representative races are on the ballot.