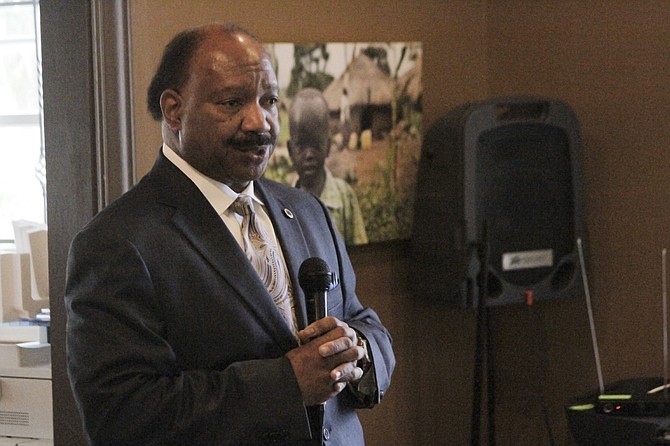 JACKSON — Hinds County Supervisor Robert Graham holds up the Continental Tire plant as the saving grace of Jackson. "We are at the forefront of something very big," Graham said this morning.

He spoke to the weekly assemblage of locals at the Friday Forum in the building that was until the beginning of this month Koinonia Coffee Shop. He told them of a trip he took with other Hinds County supervisors to Sumter, S.C.

"The reality is we went to Sumter to visit their plant," he said. "They said that once they started to build their Continental Plant, there wasn't a hotel, motel, bar or restaurant within 30 to 40 miles where you could get a room or eat once (the plant) came. It transformed their entire particular area."

Graham touted the promised 2,500 additional jobs for Hinds County, especially of the inclusion of minorities and women.

"They are very, very, very aware and conscious of minority participation in their business," Graham said. "But they are even more conscious of women."

"One of the first things I saw when I got to South Carolina was ladies, females, driving forklifts," Graham said. "If you can drive a forklift, whatever job that a man can do, they will put a lady in that same job and they will pay them the same pay."

"They will not discriminate as it relates to the way that they do their business," Graham said.

Graham connected the entrance of Continental to economic growth and reinvestment in the area.

"I believe that when they start their actual construction, and they come to Hinds County, I believe that the houses in south Jackson, someone will start to renovate those particular houses," Graham said. "I predict that the vacant houses in the central part of the city, people will start to live in those particular houses. They have to have houses."

As for the rest of the city, Graham said that the metro is in "a crisis."

As with most conversations about the city in the last year, Graham centered his discussion on the conditions of Jackson's roads. "You have to realize that streets and street-paving has almost supplanted crime in terms of what people are thinking and talking about," Graham said.

Graham said that the infrastructure issues in the city affects its other problems. "Paving streets, potholes, is an economic-development issue. It's a public-safety issue," Graham said. "It's an emergency-service issue."

Graham, a former Jackson police officer, said that the roads prevented police from responding quickly. "By that I mean that police officers can't speed down the street to get to your house because they have to run into the same potholes," Graham said. "The ambulances can't get to your door."

Graham's solution was to "be in a hurry."

The Jackson mayoral election is next spring, and at the moment Mayor Tony Yarber, attorney Chokwe A. Lumumba, Jason Wells and Graham have all announced their candidacies.