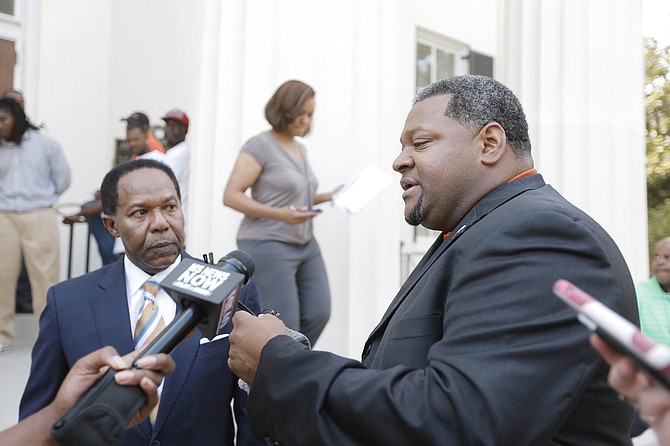 MAC and Associates, LLC, wants to keep its lawsuit against Siemens Industry Inc., in the Hinds County Circuit Court rather than in federal court. Jackson attorney Robert Gibbs (left) is represented owner Marcus Wallace (right) in the case. Photo by Imani Khayyam.

JACKSON — MAC and Associates, LLC., wants a Jackson jury to decide whether Siemens Industry Inc. violated the terms of the contract to install new digital water meters as a part of the $90-million contract with the City of Jackson.

MAC's attorney, Robert Gibbs, said during a July 25 phone interview that his client believes Hinds County is the best venue for the case "because the work was done locally."

"Siemens moved to Jackson," Gibbs said. "The water-meter project was a Jackson project. We believe that the proper venue should be in Hinds County where Jackson is located."

Siemens, a large international corporation, in response to the complaint Gibbs filed in Hinds County, asked for a transfer of the civil suit into the Southern District of Mississippi federal court on June 3.

"We filed the case originally in Hinds County Circuit Court," Gibbs said. "There is a legal process that's called a removal, and Siemens utilized that process to remove the case to federal court."

MAC and Associates, LLC, originally filed its complaint in Hinds County Circuit Court on May 31, marking the occasion with a large press conference in front of Jackson City Hall. The company claimed that Siemens allegedly transferred work guaranteed in the original $20.3-million contract from MAC to another company, Pedal Valve.

"Doing that cost MAC millions of dollars in damages," Gibbs said during the May 31 press conference.

After the removal notice, MAC had its opportunity to respond. "Once that process starts, we have the right to seek to get the case back where we originally filed it," Gibbs said. "And that's called a motion to remand, which we filed."

Siemens argues in its court filings that because parent company Siemens Industry is over "the corporate officers who direct, control, and coordinate Siemens Industry's major corporate activities live and have offices in Georgia and Illinois, not Mississippi."

The move from the local court into the federal arena will also transfer the decision away from Hinds County Circuit Court Judge Tomie Green.

"That motion is pending before Judge (Henry) Wingate who will ultimately decide the appropriate venue for the case," Gibbs said of the federal court.

Gibbs emphasized that because the whole affair occurred in Jackson, for the benefit of the city and citizens of Jackson, that local people should sit in the jury box.

"The contract was executed in Jackson," Gibbs said. "The work was performed in Jackson, and we believe the citizens of Jackson should be the ones who ultimately decide whether or not our clients were properly treated or not."

The Southern District of Mississippi includes 48 counties in south Mississippi, an expansive jurisdiction compared to the one county the Hinds County court serves.

"If the case remains in federal court, the only difference is the jurors will be brought from a wider area, which would not only include Hinds County but the other counties in the Southern District of Mississippi," Gibbs said.

The attorney representing Siemens in the case, Walter Johnson, did not return requests for comment by press time.