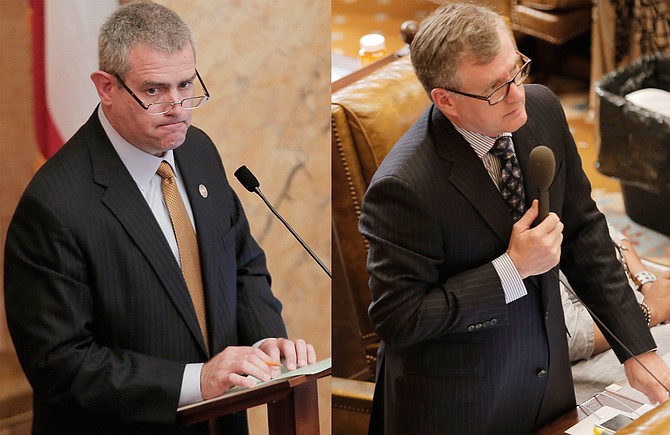 JACKSON — The Mississippi Supreme Court heard arguments Tuesday on a petition Rep. Jay Hughes, D-Oxford, filed during the 2016 legislative session, alleging that speed-reading bills in the House of Representatives violates the state's constitutional provision that allows bills to be read.

Lawyers for both parties made arguments July 19 about the jurisdiction and whether or not they believed that speed-reading bills actually violates the part of Mississippi's Constitution (Article 4, Section 59) that says, "and every bill shall be read in full immediately before the vote on its final passage upon the demand of any member."

Michael Wallace, who represented Speaker Philip Gunn, R-Clinton, in the case, said his client did not violate the state Constitution by reading bills at the speed he chose and argued that the Mississippi Supreme Court did not have jurisdiction to intervene in matters of internal procedural rules of the Legislature.

"Jurisdiction is not a matter of how bad the case is," Wallace said. "It's a matter of what power has been delegated to this court by the constitution."

Wallace pointed to two cases from the late 1800s when Mississippi's high court ruled that their judicial power did not include the power to intervene the internal proceedings of the Legislature.

Justice Leslie King asked for other hypothetical scenarios where judicial intervention might be sought. "What if the Legislature adopted a provision that said all seating would be assigned strictly by race?" King asked Wallace. "Would that be something that this court would have jurisdiction to review?"

"As your Honor is well aware, one of the unfortunate problems with the 1890 Constitution is that it does not contain that particular prohibition," Wallace said. "The federal Constitution does, and I certainly think that federal courts can and would intervene in such a situation."

S. Ray Hill III, an Oxford attorney, represented Hughes. He argued that the Mississippi Supreme Court did have jurisdiction over the case because the "demon chipmunk" voice that equated to speed-reading of bills made it impossible for lawmakers to understand what was being read—and did not equate to reading.

"If you were able to hear what representatives call the 'demon chipmunk,' it would be clear that no reading is taking place—no one can understand what's being said," Hill told the court.

Justice James Maxwell II asked Hill why Hughes asked for bills to be read in the first place. Hill pointed to Hughes' constitutional right to have them read, even if that tactic was used as a filibuster or to help those seated in the gallery to hear the language.

Hughes told reporters after arguments that the only recourse representatives had was to come to court because Gunn did not slow down the reading, even after members asked for it. Hughes said he would like both the court to order Gunn to read bills at a reasonable speed and for his petition to go back to circuit court to lay out sufficient facts to prove jurisdiction.

"They have jurisdiction because that's the very essence of our tri-part government," Hughes said. "The demon chipmunk does not represent reading as we would teach our third graders."

Wallace refused to comment on the case, and the speaker's office declined to comment on pending litigation. Gunn was not present in court on Tuesday, and Wallace said the speaker was in Cleveland, Ohio, for the Republican National Convention. Speaker Pro Tempore Greg Snowden, R-Meridian, and Rep. Charles Young, D- Meridian, were both present along with Hughes.

Chief Justice Bill Waller did not say when the court will rule.